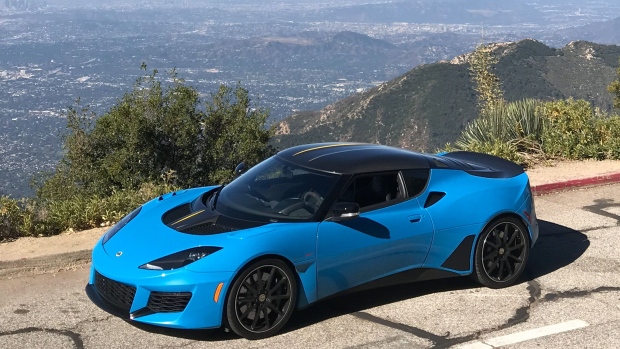 (Bloomberg) -- Everybody wants to love Lotus. The 71-year-old British automaker has been a favorite of both real-life daredevil Ayrton Senna and fictional superspy James Bond alike. Its perfectly cool, wedge-shaped Lotus Esprit and chic Evora designs have set style standards for generations.

But Lotus doesn’t make loving it easy. The marque has spent years offering only intermittent sales in the U.S. And for many enthusiasts, the mechanical reliability of its older cars, and the fit and finish of its newer ones, have simply not kept up their end of the bargain. Perhaps the just-announced $2.1 million all-electric Evija might redeem them, with looks as beautiful as its counterparts from Italy.

Until then, let’s talk about the 2020 Lotus Evora GT. I was more than eager to get my hands on the newest (and only) modern Lotus you can buy in America today. I test-drove the $96,950 whip from Carmel, Calif., to Los Angeles, skirting both the two-lane roads along the Pacific Ocean and the broad open highways that cut through the Sonoran desert. There were high points (the driving) and low points (the interior). I’ll get to those in due time. It was a roller-coaster of emotions—but it was always fun.

When electric motors seem to be taking over everything from sport wagons to SUVs, and when even sport coupes are starting to feel like interchangeable appliances, the Evora GT stoked my innate driver’s spirit more than anything in a long time. It’s a true daily driving, street-loving sports car I won’t soon forget.

Let’s be frank, it looks like what I’d imagine a nine-year-old would want in a toy car: rear spoiler, hood vents, rear wheels pushed out, a short, slanted roofline, Michelin Sport Cup tires (19-inch in the front, 20-inch in the rear), and big LED and bi-xenon headlights angled nearly halfway across the hood of the car to look threateningly quick. It comes in bright colors such as painting-tape blue and safety orange. (The one I drove was blue, which photographed surprisingly well.)

This is not your classically elegant sportscar. But in this case, that works; most everything else on the road these days feels so boring. Instead, the Lotus Evora is compact, lightweight, and athletic in its styling. Its look matches its driving nature—sporty as heck—which is all I can really ask of any car.

The 416-horsepower V6 supercharged engine wheezes and hums as you shift and accelerate, rather than growls or gargles like other cars. It’s a cool, though unexpected, effect. Every good car should have a distinctly identifiable sound that precedes the car coming down the street—one more reason why electrics cars are going to have to work harder to earn my affection.

Equally as cool, through a clear window that separates the cockpit from the engine of the car you can see a lever connected to the throttle move up and down as you press the gas. It reminded me of watching the gears work in old steam-powered cars—a fond reminder that yes, we are still dealing in mechanical power here.

The fact that the Evora GT weighs just 3,175 pounds means that when paired with that horsepower, it gets to 60mph in 3.8 seconds. Top speed is 188mph. This makes the Evora GT the fastest-ever road-legal Lotus to be made available in North America. The tiny carbon-fiber body and aluminum components make the car feel tangible and alive, like you’re actually working as a team to conquer the road ahead. It’s a feeling I love but increasingly fail to feel from behind the wheel of any car.

Driving the Evora GT was so fun, in fact, that I took the long way home from Carmel, a full 400 miles door to door; the 26 mpg highway efficiency (20 mph city and highway combined) required a stop for refueling. A big part of the thrill is due to the six-speed manual gearbox, which may be the best one you can buy today for the price. It’s super short-shifting and glides effortlessly into third, fourth, and fifth gear as quick as the snap of a whip. Lotus offers an automatic transmission option for $2,700, but I strongly suggest you avoid that. This car shines when it’s driven hard, and the engagement of a shifter only enhances that goal.

The low point of the car, of course, if you know Lotus at all, is the interior, especially the “technology and infotainment system,” if I can even call it that—and I won’t, so I’m using quotes. The entire console and dashboard of the car are far behind that of what you’d find in an entry-level Porsche 911, which costs less.

Is it possible for a car to have an integrated 7-inch touchscreen with Apple CarPlay and Android Auto, Bluetooth, satellite navigation, and reversing camera all standard and still seem woefully outdated? Lotus somehow made it happen. Just imagine what your CD player looked like in high school, and you’ll get the right feel for what to expect in the Evora GT. If 1997 was a good year for you, you’ll feel right at home.

It’s also true that the visibility is abysmal. Sightlines straight back through the rear-view mirror are seriously compromised by the engine and the shell-like cage that covers the back of the car, and the sloped side pillars on the shoulder of the car act like brick walls. There’s no way you’re seeing anything behind either of your shoulders unless you physically turn your head and crank your neck.

Surprisingly though, the luggage space in the Evora GT is adequate. That this surpassed my expectations to beat out even more-expensive, crazy cars like the Lamborghini Huracan Evo and the Jaguar F-Type should tell you how rare this is. You’ll be able to fit two rolling-sized carry-ons in the space behind the two seats inside the cabin, and you’ll be able to fit a couple backpacks or duffel bags in the trunk. If you opt for the 2+2 seat configuration, you’ll lose that rear storage space, though you can probably throw the bags on the top of that second seat of seats, because there’s no way a human being over the age of 5 will fit back there. You know, like how it is in the 911.

The footwells and headroom inside the cabin were refreshingly spacious, too—big enough to fit lanky me, my 6’2’’ boyfriend, and our favorite straw hats all at the same time. And a grand old time we had indeed.

So, would I buy a Lotus Evora GT, if I was in the market for something fun to drive aggressively for hours on the highway and that wouldn’t ruin my back and joints and delicate ears? After all, $100,000 is a lot of money to spend on a car, and most people would probably just as soon buy a Porsche, which has an undeniably better track record of reliability and craftsmanship.

Then again, I’m not most people, and I do like to feel different from the maddening crowd. Maybe you do, too.

To contact the author of this story: Hannah Elliott in New York at helliott8@bloomberg.net