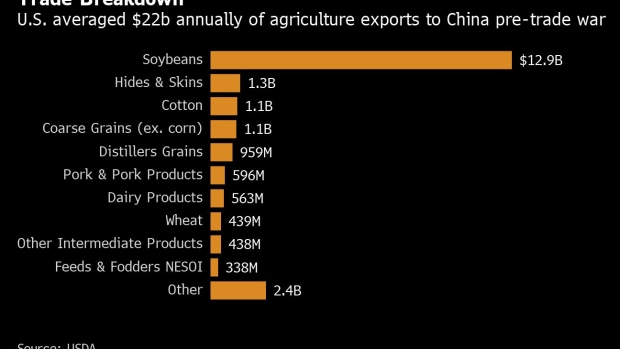 (Bloomberg) -- In all, China could make almost $95 billion in additional purchases of American commodities as part of its trade deal with the U.S. The prospect is already drawing skepticism.

U.S. President Donald Trump highlighted that the so-called phase-one deal signed in Washington will benefit farmers, a core voting bloc that he needs to appease to boost his re-election prospects. China has cut imports of American agricultural products during the long-running trade war between Washington and Beijing, roiling the economy in the nation’s farm belt.

“Given the numerous deals that have been reached and then breached in the past two years, we are also skeptical,” the National Farmers Union, which advocates on behalf of almost 200,000 American farm families, said in a statement. “And without more concrete details, we are deeply concerned that all of this pain may not have been worth it.”

China pledged to buy a total of $32 billion in agricultural products over the next two years, while it will also “strive” for another $10 billion. That includes oilseeds, meat, cereals, ethanol and cotton. It also promised an additional $52.4 billion in purchases of American energy such as liquefied natural gas, crude oil and coal over 2020 and 2021.

However, the terms of the latest deal don’t specify how much of each product China will buy. It also didn’t have details on whether the Asian nation will lift retaliatory duties it imposed on American products such as soybeans and LNG as part of the tit-for-tat tariff war.

“While China’s phase-one commitments are welcomed, U.S. pork exports continue to be suppressed because of the country’s 60% punitive tariffs,” National Pork Producers Council President David Herring said in a statement. “In order to fully capture the benefits of this deal, we need China to eliminate all tariffs on U.S. pork for at least five years.”

“Signing the deal is the easy part,” Ken Morrison, a St. Louis-based independent trader, said by phone. “I have yet to hear a sound argument on how China will execute this deal.”

--With assistance from Isis Almeida, Millie Munshi, Michael Hirtzer and Will Wade.

To contact the reporter on this story: Pratish Narayanan in New York at pnarayanan9@bloomberg.net

To contact the editors responsible for this story: Tina Davis at tinadavis@bloomberg.net, Pratish Narayanan, Millie Munshi