Ari Rubenstein knows it’s an opinion people don’t want to hear. That two decades of computer takeovers on exchanges, advancements that put thousands of people out of work and left high-frequency traders like him in control, are what kept markets humming during the coronavirus.

The co-founder and CEO of electronic market maker GTS, whose own career began in commodities pits at the World Trade Center, is blunt when asked what would have happened had it still been necessary to get an army of floor traders to Lower Manhattan in March and April.

“It would’ve created massive uncertainty and exacerbated the problem tremendously,” says Rubenstein, whose firm sometimes buys and sells a billion shares a day. “If there was ever a question that technology and innovation is the future of Wall Street, we’re seeing that future right now.”

So with Wall Street, so with everything else, it has lately seemed. Right after being saved by the machines, exchanges became the site of stampedes to any stock with a claim on automation, particularly giant tech.

While that’s been the salvation of bulls as the S&P 500 rallied 27 per cent from its March lows, it’s an escalation fated to provoke concern among people worried about workers and wealth equality in America. 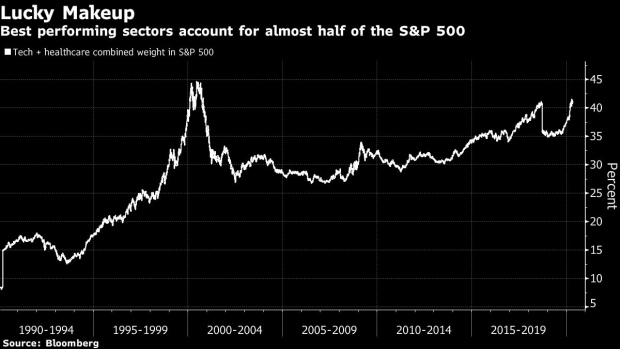 Goldman Sachs repeated the often-heard observation that Facebook, Apple, Amazon, Microsoft, and Google make up 20 per cent of the index, the highest for any five members in more than 30 years.

But the pandemic has clearly also made it easier for haters to frame the market as a place that encourages and celebrates companies whose distinguishing feature is that they remove humans from the process.

“There’s a symbiotic relationship between the market and what corporations are doing,” said Christian Weller, senior fellow at the Center for American Progress and a professor of public policy at the University of Massachusetts, Boston. “Both corporate profits and behavior are anti-worker and boost stock prices.”

That talk will strike some as extreme, but shows how divisive the issue can get. Right now, the Russell 1000 winners list is dotted with systematic names. Amazon.com Inc., whose shares have soared, may be a huge employer, but has displaced many times more workers than it has hired.

MarketAxess Holdings Inc., an automated bond trader, is up 38 per cent since the February top, while electronic market maker Virtu Financial Inc. has jumped 41 per cent. Even Netflix Inc., beating the S&P 500 by about 40 percentage points this year, can be viewed as a category killer of sorts when it comes to TV stations and cinemas.

To be sure, businesses reliant on public contact have been casualties of tech innovation for decades, it’s nothing new. And the market isn’t the economy -- though it’s at least a reflection of it, and a bet on what will thrive in the future. Unsurprisingly, amid a crisis bent on keeping everyone at home, bets are coalescing around companies that ease the burden of being locked indoors.

“A lot of the productivity investments that companies made over time have allowed the absorption of this shock of the elimination of a tremendous amount of face-to-face work,” said Joseph Fuller, professor of management practice at Harvard Business School.

“The United States over time has continued to deploy technology in ways that allow things like social distancing.”

Take Walmart Inc., for example. Back in 1980, the big-box retailer’s warehouses would have been packed with more people per square foot, with less automation running the operations than now, according to Fuller.

Just a few months ago, the nation’s biggest grocer unveiled a robot-run warehouse to increase efficiency and compete with Amazon. Both companies’ shares have gained in 2020, while the S&P 500 is down 11 per cent.

In addition to a more automated workforce, Fuller also highlights the penetration of broadband nationwide and big upgrades in what’s standard for computers -- built-in cameras and microphones -- as significant improvements, though ones falling disproportionately on the rich.

Such innovation has allowed white collar employees across multiple industries to work from home, without sacrificing much in terms of productivity.

Last week after reporting earnings, Twitter Inc. CEO Jack Dorsey said he’s seen “no significant decrease” in employee productivity even though everyone is working from home, and that he could see a version of this work format existing long after Covid-19.

Last month after releasing results, Morgan Stanley CEO James Gorman told Bloomberg Television that the firm has proved it “can operate with no footprint.”

Not only do fewer jobs require mandatory face-to-face human interaction across public corporations, but investors can be thankful that market-cap weighted equity benchmarks are optimized in a way to better weather stay-at-home orders.

The two best performing S&P 500 sectors this year -- information technology and health care -- just happen to hold the largest weights in the index. Both have fallen less than 3 per cent, and combined, the two industries make up 41 per cent of the S&P 500.

Big gains in industries at the forefront of automation and innovation have increased their market clout. Software firms make up 9 per cent of the S&P 500, roughly two percentage points more than they did at the start of the year.

A group of internet retail companies including Amazon and eBay Inc. is now the seventh largest weight of 69 industries -- up three spots in five months. Meanwhile, banks have dropped seven spots to slot number nine.

According to Bloomberg Intelligence strategists including Gina Martin Adams, the S&P 500 health-care sector is “well positioned for a socially distanced world.” Sam Palmisano, former CEO of International Business Machines Corp., says use of technology within health-care practices could be here to stay.

“Fundamentally at the end of the day, it’s a whole different way of practicing medicine,” he said of telemedicine on Bloomberg Television last week. “People will get used to that, and if you have the option of not going to the doctor’s office and waiting in the reception area for, as you know, a very long time sometimes because things happen, that could be attractive to you.”

Other industries outperforming the market are consumer-facing, too, including consumer discretionary, communication services and consumer staples firms.

On the flip-side, if you zero in on the companies most negatively affected by the virus, including airlines and leisure stocks, they only make up 10 to 20 per cent of the S&P 500, according to Jack Janasiewicz, a portfolio strategist at Natixis Investment Managers, which oversees US$1 trillion.

“The eye opener is when you look at the ones you are worried about. It’s not a big chunk of the S&P 500. It’s the old adage where the market isn’t the economy,” he said. “That really hits an important piece here. A lot of the stuff we’re worried about, it’s just not a big chunk of the S&P 500, so maybe we did overreact by selling off 35 per cent.”