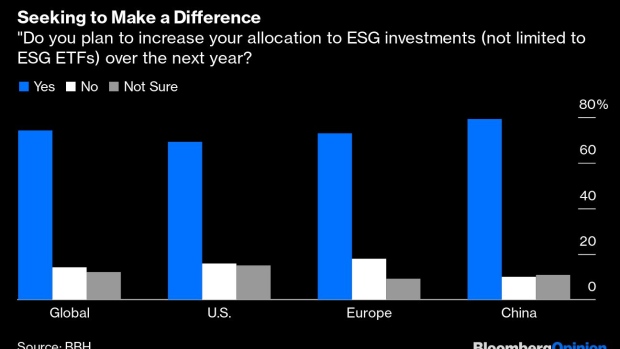 (Bloomberg Opinion) -- Investors continue to pour funds into passive investment products that aim to replicate the performance of benchmark indexes. They’re also increasingly keen that their money gets used to influence corporations to stop damaging the planet and improve social inclusiveness. Unfortunately, many of the products designed to achieve both objectives currently fall short on the goal of responsible investing.

The shift in emphasizing environmental, social and governance issues puts pressure on the index providers to come up with benchmarks that more accurately reflect the concerns investors are attempting to express by allocating capital to ESG investment products. Currently, though, even dedicated ESG indexes have shortcomings that many investors are probably unaware of.

The U.S. Vegan Climate exchange-traded fund, for example, tracks a $124 billion index created by Beyond Investing that excludes companies engaged in a laundry list of potentially harmful activities, including animal exploitation, human rights abuses and fossil fuels extraction. While the $14 million ETF’s top five holdings — Apple Inc., Microsoft Corp., Facebook Inc., Visa Inc. and Mastercard Inc. — may all meet those criteria, they’re hardly the first names that spring to mind when thinking about the words vegan or climate. And there are many other examples.

BlackRock Inc.’s announcement this month that it plans to prioritize sustainability in its investment decisions highlights the issue confronting index trackers. With two-thirds of its $7.4 trillion of assets managed passively, the world’s biggest asset manager acknowledged that the bulk of its cash isn’t available to pursue those goals. Harnessing that firepower will become increasingly important if the passive industry is to meet the ESG aspirations of its growing customer base.

It’s even likely to radically change the industry, and sooner than people realize. To that point, Hiro Mizuno, the chief investment officer of Japan’s $1.6 trillion Global Pension Investment Fund, says the days are over when it’s enough for passive fund managers to compete simply on providing the lowest tracking errors at the lowest cost. Now they have to add value too. “The main battlefield among our passive managers is going to be in the stewardship area.” he told the Financial Times last month.

BlackRock is far from alone in shifting to a more moral investing stance. A survey of 300 institutional investors, financial advisers and fund managers that use ETFs published on Monday by Brown Brothers Harriman & Co. showed that almost three-quarters of respondents expect to increase the amount allocated to ESG investments in the coming year.

European participants in the BBH survey ranked ESG-themed products as the ETF category they would most like to see more supply of, while Chinese investors ranked the sector as their second most desired area of expansion, along with more funds designed to track core indexes.

Money is flooding into the sector. ESG-designated assets were the fastest-growing category of ETFs listed on Deutsche Boerse AG’s Xetra market last year, with investments more than tripling to more than 23 billion euros ($25 billion). Globally, ESG ETFs have enjoyed net inflows for 52 consecutive weeks, taking in $30 billion in the past year and garnering almost $3.4 billion in the week ended Jan. 20, according to data compiled by Bloomberg LP, which competes in selling index data to investors.

There are two main routes whereby ETF providers can meet the implicit demands of clients allocating money to passively managed ESG products. The first is to use their collective muscle to prompt index providers to increase the granularity of the benchmarks used to shape asset allocations. Improving the discrimination of ESG indexes would go a long way to ensuring investors aren’t being hoodwinked into products that aren’t as green or socially savvy as they first appear.

The second is trickier. Excluding companies deemed to be damaging the environment or being socially irresponsibly isn’t enough to move the needle. Engaging with the boards of those firms and using the clout of a shareholding to force them to change their ways is much more effective.

But that costs money, and the success of the ETF model has been founded in large part on its ability to charge ultra-low fees. If BlackRock and its peers are serious about taking their social responsibilities more seriously, investors will have to pay for the privilege — and the sellers of index trackers will need to be honest about the increased cost of that kind of activism. Let’s hope the buyers of the products decide it’s a price worth paying to do good.