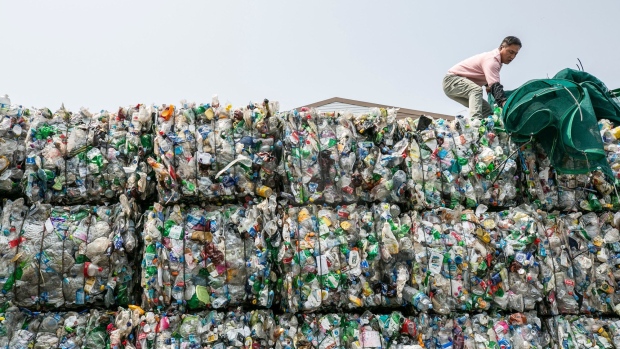 A worker removes a tarp cover bales of compressed plastic waste on a truck at a Junyoung Industrial facility in Gimpo, South Korea, on Thursday, April 19, 2018. In a bid to curb its own rampant pollution, China has clamped down on the import of unsorted paper and plastics, with outdated industrial mills used to process foreign scrap into reusable raw materials closing down. The effects of the strict new standards on halting impurities in waste imports are now being felt worldwide. , Bloomberg

(Bloomberg) -- As the world strives to wean itself off fossil fuels, oil companies have been turning to plastic as the key to their future. Now even that’s looking overly optimistic.The global crackdown on plastic trash threatens to take a big chunk out of demand growth just as oil companies like Saudi Aramco sink billions into plastic and chemicals assets. Royal Dutch Shell Plc, BP Plc, Total SA and Exxon Mobil Corp. are all ramping up investments in the sector.

Renewed emphasis on recycling and the spread of local bans on some kinds of plastic products could cut petrochemical demand growth to one-third of its historical pace, to about 1.5% a year, said Paul Bjacek, a principal director at consulting firm Accenture Plc.

“Oil companies are saying, no problem, we’ll invest in petrochemicals,” Bjacek said. “But petrochemicals, after the circular economy happens to the maximum extent, is likely to be a low-growth market.”

Demand for gasoline is flatlining as electric vehicle sales surge and conventional cars become more efficient. But oil is essential for much more than just transportation: It’s broken down into chemicals and plastics used in every aspect of modern life. Growth in demand for chemicals already outstrips the need for liquid fuels, and that gap will widen in coming decades, according to the International Energy Agency.

Crude drillers and refiners see that as their safe haven against the fading outlook for fuel, ensuring that they’ll have a piece of a more robust market for their hydrocarbons. The shift is most apparent at Saudi Aramco, the world’s biggest oil company, which in March agreed to pay $69.1 billion for a majority stake in Saudi Arabia chemical producer Sabic while investing billions more to expand chemical production around the world.

New oil refineries are being designed to produce less fuel and more chemicals. China is leading the way, with more than $100 billion invested in crude-to-chemicals projects over the next five years, according to Citigroup Inc. analysts led by Horace Chan.

Projects by companies including Hengli Petrochemical Co. and Rongsheng Petrochemical Co. will devote as much as half their capacity to chemicals, mostly paraxylene, a material that China imports to make polyester and plastic bottles. That’s a sharp increase from the 10% chemical production at a typical refinery and as much as 20% at modern refineries integrated with chemical plants.

“They’re building these units because they need the fuel, but they are sort of future proofing it,” said John Roberts, an analyst at UBS Securities. “It’s acknowledgment that there is a peak coming in the global fuels market.”

Saudi Aramco, with Chevron Lummus Global and CB&I, is planning a refinery with 70-80% of its output in chemicals. That could double the profitability from a barrel of oil, IHS Markit estimates. It’s building another refinery in Saudi Arabia with 40% of its production dedicated to chemicals, as well as adding chemical capacity to another Texas plant.

Exxon plans to expand its Asian and North American chemical-making capacity by 40% in anticipation of rising demand.

But consultants and analysts are sounding the alarm that petrochemical demand is heading south of earlier forecasts. Images of waste fouling the oceans are drawing government bans on single-use plastics from the European Union to India and California. Chemical makers are investing in recycling technologies and infrastructure. Coca Cola Co. is pledging to recycle one bottle for every one it sells by 2030 as consumer products companies come under pressure to reduce their use of plastics.

With more investment in waste recovery, recycled resins could replace almost a third of virgin plastic by 2030 and nearly 60% by 2050, slashing demand for petrochemicals, according to a McKinsey & Co. report. Christof Ruehl, the former head of research for the Abu Dhabi Investment Authority, estimates a 20% cut in oil demand from petrochemicals if current trends continue.

Sharply higher recycling rates could cut plastics growth in half, said Robin A. Waters, IHS director of plastics planning and analysis. That’s a worst-case scenario, but it shows the potential disruption to the industry, where plastics already account for half of demand, he said.

“It adds some uncertainty from a demand standpoint as the oil industry is looking more and more to chemicals for diversification,” Waters said.

To contact the editors responsible for this story: Brendan Case at bcase4@bloomberg.net, Susan Warren, Tony Robinson