Consumers fearful of catching the coronavirus are adapting their transport habits: Crowded airplanes are now unappealing, while being cocooned in a car feels safe.

Car rental firms have had a close-up view of this rapid shift in consumer behaviour because most generate more than half of their revenue at airports.

This dependence looked like it would be disastrous for the entire car rental sector, but on Tuesday evening two of the world’s largest car rental groups — Paris-based Europcar Mobility Group and U.S. operator Avis Budget Group Inc. — gave quite different assessments of their prospects. That has a lot to do with how they’ve managed their large debts and costs.

Absent a takeover offer, Europcar which is partly owned by private equity group Eurazeo SE, looks to be heading for a financial restructuring, whereas Avis’s fortunes are rapidly improving. The latter’s shares have more than trebled since their March low. The stock surged another 14 per cent in after-hours trading on Tuesday, after the group said it expects to start generating positive cash flow again. 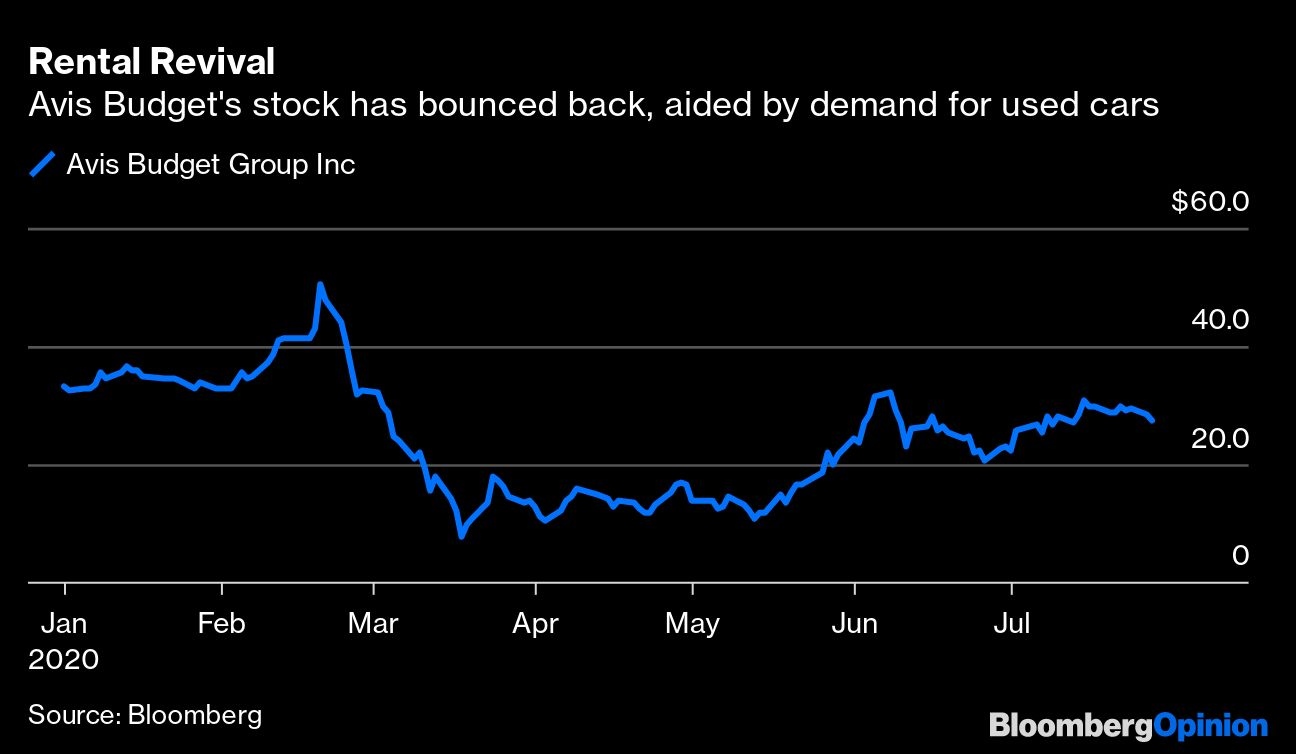 This transatlantic divide is surprising for a couple of reasons. First, unlike in Europe, where the virus has been under fragile control, the coronavirus is still ripping through the southern United States. Second, U.S. car rental firms were denied a bailout from Washington, and Hertz Global Holdings Inc. and Advantage Rent A Car both filed for bankruptcy in May. In contrast, Europcar was able to tap state-backed loans.

Europcar has also enjoyed one other big advantage: It can often return unwanted vehicles to their manufacturers. U.S. rental firms have to sell these themselves, since they typically purchase most of their vehicles outright.

When used car auctions shut down during the height of the pandemic, the American companies found it difficult to downsize their fleets. Used car prices plunged and became a factor in forcing Hertz to seek bankruptcy protection.

Now with showrooms reopening, second-hand car sales have rebounded. Even formerly car-shy New Yorkers have discovered it’s useful to have a vehicle.

Hence, Avis has been able to reduce its fleet by around one quarter, and coupled with cost savings and job cuts, it burned through far less cash than expected during the second quarter. Importantly, Avis has also retained access to capital markets: It raised US$500 million from debt investors in May, albeit by offering an eye-watering 10.5 per cent coupon. Thanks to the Federal Reserve’s aggressive market interventions and Avis’s own resilient performance, those junk bonds now trade well above par.

If only Europcar could say the same. The depressed price of the French group’s 600 million euros of 4.125 per cent coupon bonds due in 2024 reflect worries that holders won’t get all their money back. 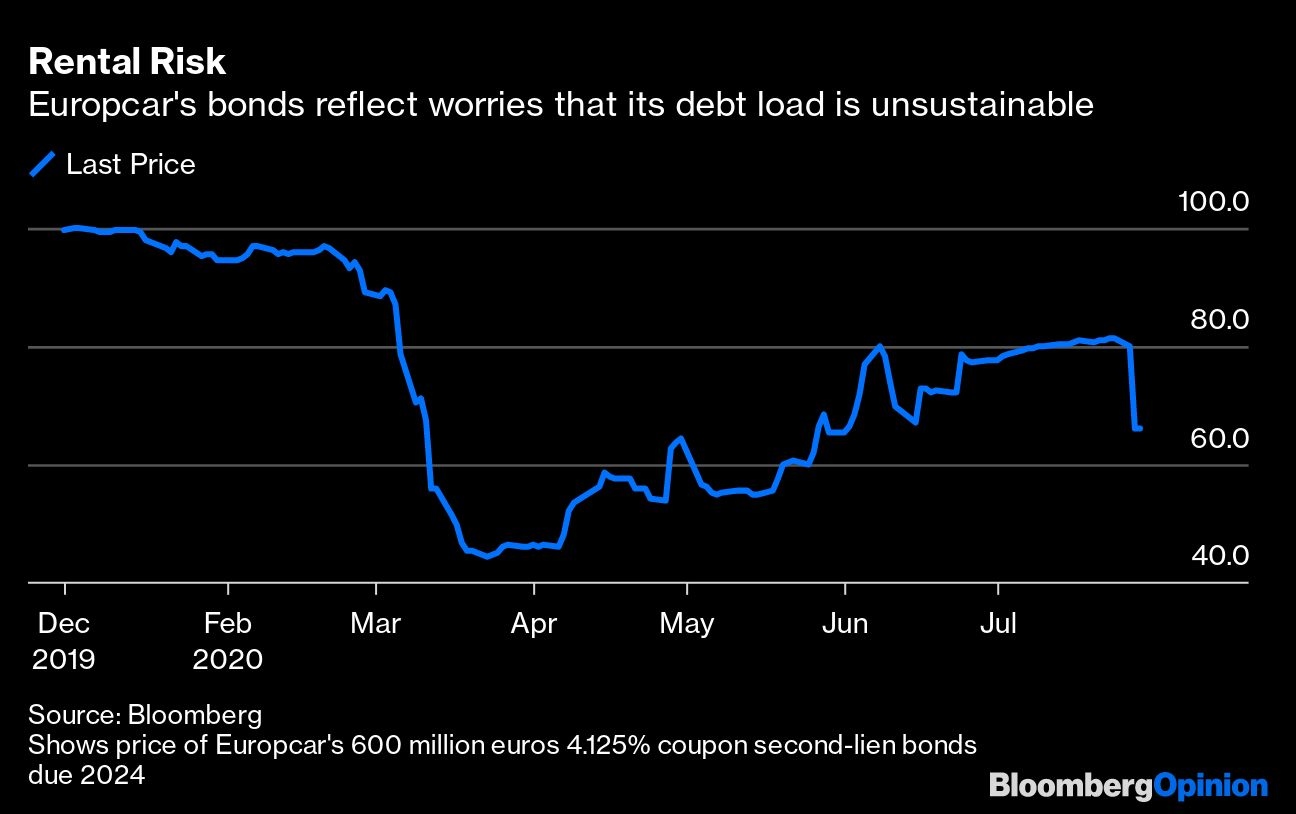 Maybe they won’t. On Tuesday Europcar reported a first-half loss of 286 million euros and warned its existing capital structure “weighs on its ability to ensure a proper path to recovery.” It is therefore evaluating “short and long-term alternatives” to address its capital structure and “liquidity constraints.”

The best hope for Europcar shareholders, who’ve lost 90 per cent since the stock’s peak in 2017, is that someone makes a bid for the company. Eurazeo was looking at exiting its remaining 30 per cent stake even before the novel coronavirus emerged. Now Volkswagen AG, which sold Europcar to Eurazeo for 1.3 billion euros in 2006, is exploring an offer for its former subsidiary, Bloomberg reported last month.

Acquiring Europcar might help VW expand its range of mobility services, including for renting and leasing electric vehicles. Europcar’s airport outlets are likely to remain depressed for several years, but its commercial vehicle and urban car-sharing businesses are performing better. There are also opportunities in the long-term rental market: Europcar’s “drive safely back to work” marketing effort hopes to persuade commuters nervous of public transport to borrow a car for a few weeks.

Still, taking on Europcar’s problems would be a big distraction for VW, which has plenty of its own issues right now. The U.K.’s decision this week to impose a quarantine on holidaymakers returning from Spain doesn’t bode well for overseas tourism bookings.

Unless more government help is forthcoming, Europcar’s debt holders may have to cut the rental firm some slack.