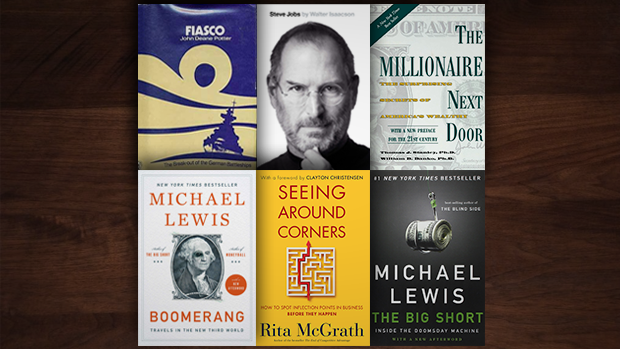 It’s been a busy 10 years for business news, but BNN Bloomberg’s anchors and reporters managed to sneak in some extra reading throughout the decade.From a book about what millionaires do differently, to a deftly-written autobiography on one of technology’s biggest pioneers, to an account of Britain’s biggest embarrassments of World War II — this decade’s best business books (or books with a business bent) encompass a wide range of topics and genres.If you manage to catch a break this holiday, be sure to check out some of the titles below. Happy reading!

The Millionaire Next Door by Thomas Stanley

This is by far my favourite book of the decade. It’s a book I not only read, but encouraged all four of my children to read so we could discuss it as a family. This isn’t a book about being a millionaire. It is a book about thinking like a millionaire – and millionaires do think differently than the rest of us.

Talk of accumulating wealth isn’t enough. Reading blogs and Googling information about money strategies isn’t enough, nor is wishful thinking. What needs to happen is action. Action when it comes to money talks louder than words.

I have found those who dedicate time and energy on an ongoing basis are the ones with the discipline to get a financial education that grows over time, along with their wealth.  The Millionaire Next Door highlights millionaires spend eight hours per month, on average, managing their finances. They aren't seasonally checking out their options. Many millionaires aren’t flashy and don’t spend money frivolously. They are often first-generation, self-made, small business owners. Creating wealth didn’t happen overnight. It took years to amass their wealth and only by living a modest lifestyle were they able to save.

Many dream of becoming a millionaire or financially secure, but achieving that goal will not come from the occasional word search via Google. Financially literacy is hard work and an ongoing process. We owe it to ourselves the make the commitment to take charge now. This book was published more than 20 years ago and is as relevant today as it was then.

This book, released shortly after Jobs’ death from cancer, was a remarkable and honest look at one of the business world’s greatest visionaries. From his childhood growing up in California as the adoptive child of a machinist and accountant, to his time building the various devices that contributed to Jobs’ rollercoaster career with Apple, Isaacson deftly captures the essence of the person who ushered in the personal and mobile computing revolution we now live in today.

Seeing Around Corners: How to Spot Inflection Points in Business Before They Happen by Rita McGrath

In this book, McGrath discusses incoming disruptions in various industries as both a risk and an opportunity. She says paradigm shifts, or inflection points, are constantly happening, citing companies like Blockbuster and Kodak as “disruptors” that crept up slowly and became sudden powerhouses. She also discusses the opportunities grasped by the disruptors, i.e. the Netflix’s and Amazon’s of the world. Her book examines how a corporation can achieve that sought after “strategic agility” and how it can better anticipate change. Spoiler alert: it includes looking around corners, stepping outside your corporate bubble, observing industry demand and listening to those with different viewpoints.

The Big Short: Inside the Doomsday Machine and Boomerang: Travels in the New Third World by Michael Lewis

The business writer of the decade award has to go to Michael Lewis. He has a gift for breaking down some pretty dense stuff and crafting finance esoterica into compelling page-turners. You can choose any of his books for the past 10 years and crown it the business book of the decade. If you’ve never read his work, start with The Big Short: Inside the Doomsday Machine. Cheap money has been the drug of the decade, and Lewis takes the reader to its origins – financial sector on the brink. If you’ve already read the hits, then check out Boomerang: Travels in the New Third World. Lewis travels to Ireland, Greece, Iceland and Germany to explore how cheap money mucked things up. I’ve been to Germany, but was not aware of their feelings toward money and human excrement until Lewis enlightened me. Ever heard of der Dukatenscheisser?

Fiasco: The Break-out of the German Battleships by John Deane Potter

This account of the biggest British embarrassments of World War II provides lessons for any business on the importance of checking assumptions and ensuring that managers aren’t hoarding information. In 1942, three huge German warships — Scharnhorst, Gneisenau, Prinz Eugen — sailed via the English Channel from Brest, France to Germany. They shook off attacks from British ships and aircraft, which should have found them easy targets in the narrow waters. Secrecy, complacency and poor planning in the British military produced a shambolic response. The one piece of good news for an irate Winston Churchill was that mines damaged Scharnhorst and Gneisenau. However, the British couldn’t announce that success because it would have revealed their ability to decrypt German messages.