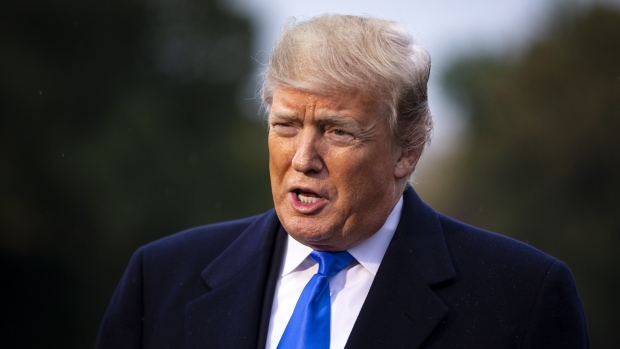 U.S. President Donald speaks to members of the media before boarding Marine One in Washington, D.C., U.S., on Friday, Oct. 26, 2018. Trump vowed to end political violence in the U.S. after the arrest of a suspect in a string of bombing attempts aimed at the president's critics, then used the moment to complain about hostility directed at him. , Bloomberg

We spend lots of time thinking about the future. This is especially true for those of us who put capital to use seeking to obtain a return, relative to a certain amount of risk assumed. Prospectively, we consider our options and imagine various outcomes. Afterward, we evaluate the results to figure out what went right or wrong.

There's the problem. Once we know a specific outcome, our analysis of the entire process becomes tainted. World-champion poker player Annie Duke uses the term “resulting.” It is an after-the-fact explanation for a recent event, ignoring random outcomes, discounting luck and using one’s hindsight bias. As you might imagine, people who engage in “resulting” fail to improve their processes.

One solution to these sorts of problems is to consider alternative outcomes. I am not referring to the wishful thinking of “If only we bought Amazon at US$9 and Bitcoin at 50 cents." Rather, it is imagining scenarios where small changes might produce very different outcomes. I refer to the counterfactual, a very useful tool for investors, gamblers -- indeed, to anyone trying to analyze events with uncertain outcomes.

The term itself was coined by Nelson Goodman in his article, "The Problem of Counterfactual Conditionals." But the idea has been around for a long time. Air Force Colonel John Boyd, who helped change the art of air warfare, said “If you want to understand something, take it to the extremes or examine its opposites.”  Berkshire Hathaway’s Charles Munger famously said “Think forwards and backwards -- invert, always invert.” (Though Munger lifted that phrase from Carl Gustav Jacob Jacobi, the great 19th century Prussian mathematician, he is often credited with the maxim.)

How can we use the counterfactual to help us solve investment or other thorny problems? Let’s consider a few examples of counterfactuals to see what light they might shed. I used the technique around the idea of U.S. government bailouts:

-- What if General Motors and Chrysler hadn't been bailed out? -- What if JPMorgan Chase hadn't received guarantees for US$29 billion of Bear Stearns Cos.’s liabilities? -- What if Citigroup Inc. and Bank of America Corp. had been put into bankruptcy? -- What if American International Group Inc.’s counterparties hadn't been made whole by the federal government?

There is a persuasive case to be made that under alternative scenarios there might have been more pain short term, but healthier economic and political outcomes over the long term.

Similarly, consider the Standard & Poor's 500 Index's performance in 2018 -- high volatility and minimal gain versus 2017’s increase of more than 20 per cent amid market calm. What if the S&P 500 had had a more typical year in 2017? Let’s invert the big gains and low volatility and consider a more usual scenario -- say, a high single-digit percentage gain and moderate levels of volatility. Had that happened, do you imagine this year might be very different from what it is? If so, it's easy to conclude that the weak returns and high volatility of 2018 are a reaction to the strong but low volatility of 2017. This inversion/counterfactual suddenly makes most of the other theories about the market sound like nonsense.

Since tomorrow is the midterm election, let’s do one more exercise, covering the intersection of economics, markets and politics.

The most exasperating version of this is the complaint from those on the left that “nothing seems to stick to Donald Trump.” From the Stormy Daniels imbroglio, Russian election meddling to countless examples of ethical lapses and dubious financial dealings, it all seems to bounce off of him. Despite one outrage after another, goes the lament, he is impervious to any and all repercussions for his actions.

I believe this is a false construct. And, I believe I can use a simple counterfactual to demonstrate why this is so.

Imagine a president, any president --- party is of little importance here. He or she gets elected during a strengthening economic recovery. A year after the election, the economy is doing about as well as before -- jobs are being created, growth is picking up, the unemployment rate continues to decline and the stock market keeps rising. This president passes a substantial tax cut. The economy continues to improve, and by the end of the second year in office, stock markets are at new highs, the unemployment rate has fallen to levels not seen in 60 years and consumer sentiment is at multidecade highs.

Now, ask yourself, what should that president’s approval ratings be? Maybe 75 percent? Even higher? If you said less than 70 percent, you're kidding yourself.

By way of comparison, the day Richard Nixon resigned in August 1974, his approval ratings were in the mid-20s. Yes, the Watergate scandal was the reason, but so was the economy, which entered a recession in November 1973. Amid an economic boom, Bill Clinton's approval was 66 percent, even after Congress impeached him for lying about his affair with a White House intern. Ronald Reagan's approval ended at 63 percent amid an economic rebound after the 1987 stock-market crash.

During the past year, Trump’s approval rating has held fairly steady at between 38 and 42 percent. In the counterfactual described above, if you knew nothing about Trump, you might think his approval rating should be double what it is now. So the claim that nothing hurts him is demonstrably false. His approval ratings are at least 25 to 30 percentage points below those of a more traditional president’s.

We experience the world as a series of probabilistic outcomes, most of which could have come out very differently. Investors should be cautious about explaining what happens by only looking at results. Instead, always consider the counterfactual. It often tells more than the facts themselves.