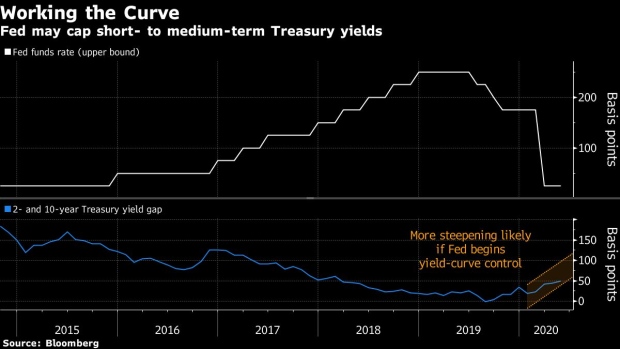 (Bloomberg) -- The Federal Reserve has already unleashed a barrage of new policies to keep the economy out of depression. Investors reckon it’s lining up another one.The Fed’s version of the strategy known as yield-curve control is expected to involve capping yields on government bonds of a chosen maturity -– by buying however much it takes. For central banks that already cut short-term interest rates to zero, it’s a way to signal that they’ll stay low for an extended period, while helping pin down longer-term borrowing costs too.Japan has been doing this for years, and Australia adopted the idea in March as the coronavirus struck. The Fed, which has responded to the pandemic by bulk-buying Treasuries and showering business and local government with credit, may not be ready to follow suit right now. U.S. states are tentatively emerging from lockdown, and policy makers will want to see how economic activity picks up.

But with unemployment at levels not seen since the 1930s, and Congress deadlocked over another round of fiscal stimulus, Fed officials have been publicly warning that more action will likely be needed. They’re taking another look at their own toolkits, in a policy review due to conclude this year. And the idea of tamping down Treasury yields keeps coming up.

Fed Governor Lael Brainard is a proponent. Vice Chairman Richard Clarida said in a webcast last week that Fed policy makers will probably get a briefing about how other central banks have done it.“We do expect yield-curve control by year-end,” said Priya Misra, head of global rates strategy at TD Securities in New York. Fed Chairman Jerome Powell and his colleagues paint a bleak picture of the economy’s near-term prospects, and they’ll need a strategy to deal with that, she said. “They can’t keep a negative economic outlook without easing monetary policy further.”

Other countries have tried negative interest rates, and some investors are betting that U.S. central bankers will follow that path too. But in October, Fed officials unanimously rejected the idea. And Clarida said Thursday that “nothing that has happened since then has changed my mind.”

The Fed is already buying trillions of dollars of government debt this year, as the U.S. borrows in record volumes to fight the virus slump. That combination, echoed across the developed world, is blurring what on paper are supposed to be sharp dividing lines between central banking and fiscal policy.

Yield-curve control, another example of that unconventional mix, would involve a tactical shift by the Fed. Instead of announcing a pre-set volume of Treasury purchases, as it has done under quantitative easing programs, it would buy (or conceivably sell) the debt in whatever volume is needed to maintain the chosen yield.Capping debt costs for the government, the argument goes, will benefit other borrowers in the economy too because those rates are benchmarks in key industries such as housing. Fed officials who favor the strategy also see it as a way of putting an exclamation point on their intentions to keep the short-rate low for a period of time.Japan, which pioneered yield-curve control in 2016, chose to pin 10-year rates at zero. When Australia adopted the idea in March, it plumped for 3-year debt and a target yield of 0.25%. The U.S. is more likely to follow the Australian example and focus on the short end of the curve, investors say.

That could mean maturities of two or three years, Tiffany Wilding, an economist at Pimco, told Bloomberg TV last week. Mansoor Mohi-uddin, a senior macro strategist at NatWest Markets in Singapore, predicts somewhere between two and five years.“That would allow longer-term yields to move above those targets and keep the curve upward-sloping, which enables financial institutions to generate profits,” Mohi-uddin said.

Treasuries have already stabilized after some violent swings in the early days of the pandemic crisis, when at one point the entire yield curve crashed below 1%, with many maturities reaching all-time lows.The 10-year note, a benchmark for global borrowing, has fluctuated around 0.7%, more than double its record low in March. Two-year yields have been trading below the 0.25% level that marks the top of the Fed’s target range, while 5-year yields are slightly above it.And the yield gap between these securities and longer-dated debt has been widening -– especially as the Treasury has tilted issuance toward the latter. It sold 20-year bonds on Wednesday for the first time since the 1980s.

Long-dated securities were part of the deal last time the U.S. experimented with a policy of yield-curve control. To help finance World War II, the Fed agreed to cap 30-year bonds at 2.5%.This time around, focusing only on shorter-term debt would help allay concern that central-bank independence is being subordinated to fiscal needs, according to Zach Pandl, a strategist at Goldman Sachs, who says yield-curve control is an option for the Fed along with more QE and even possibly negative rates.

“This would be about providing monetary stimulus rather than keeping Treasury’s borrowing costs fixed,” said Pandl. “If economic conditions change, and the recovery is faster than expected, the Fed would have the ability to move away from yield curve control and tighten policy.”For now, according to minutes of its last rates meeting in April, the Fed is more concerned about demonstrating a commitment to staying loose.

“Yield curve control would reinforce that the Fed is going to keep rates low, and allay fears it will be overly reactive by removing accommodation at the first sign of inflation,” said Jonathan Cohn, a strategist at Credit Suisse.