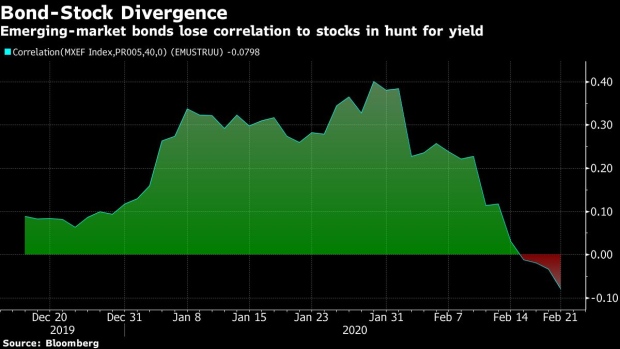 Emerging-market bonds are on fire but there there’s a worrying subtext to the rally.

While the dollar-denominated debt of developing nations advanced for an 11th week in the five days through Friday, the longest winning streak in eight years, indexes of stocks and currencies retreated as the spread of the coronavirus showed few signs of slowing. That’s left bonds more disconnected from stocks and currencies than at any time this year.

The divergence underlines the concern that the rally may have less to do with the strength of emerging economies than the scramble for returns in a world where demand for havens is sending yields in the biggest economies ever lower. The yield on the benchmark 30-year U.S. Treasury bond dropped to an all-time low on Friday as the number of infections outside of China accelerated, fueling worries the epidemic will dent the world economy.

“The search for yield is supported by a perception that global yields will remain low for the foreseeable future,” said Anders Faergemann, a London-based senior portfolio manager at Pinebridge Investments, which manages about $100 billion. “Yet, the resilience we have seen in EM hard-currency bonds -- both sovereign and corporate -- tells a story of continued support for the asset class and further capital inflows.”

MSCI Inc.’s index of emerging currencies dropped last week for the fourth week in five, sinking below its 100- and 200-day moving averages, levels that signal the potential for further declines. The MSCI stocks gauge slumped 2%.

Bank of Korea will make the difficult decision Thursday of whether to cut its benchmark interest rate to a record low, after the government raised the country’s infectious-disease alert to the highest level. As policy makers struggle to find new ways to boost growth, attention is turning to fiscal policy. Malaysia will unveil an extra economic-stimulus package on Thursday. The start of February data releases will also give investors a clearer picture of the virus’s impact on global growth.

Coronavirus concerns aside, South African Finance Minister Tito Mboweni budget’s on Wednesday could be key to determining whether Moody’s Investors Service downgrades the nation’s debt to junk status next month. Argentina’s debt negotiations will continue, while Lebanon’s bondholders are bracing for a potential default next month.

--With assistance from Karl Lester M. Yap and Aline Oyamada.

To contact the reporters on this story: Netty Ismail in Dubai at nismail3@bloomberg.net;Lilian Karunungan in Singapore at lkarunungan@bloomberg.net;Robert Brand in Cape Town at rbrand9@bloomberg.net;Sydney Maki in New York at smaki8@bloomberg.net

To contact the editors responsible for this story: Alex Nicholson at anicholson6@bloomberg.net, Justin Carrigan, Paul Wallace