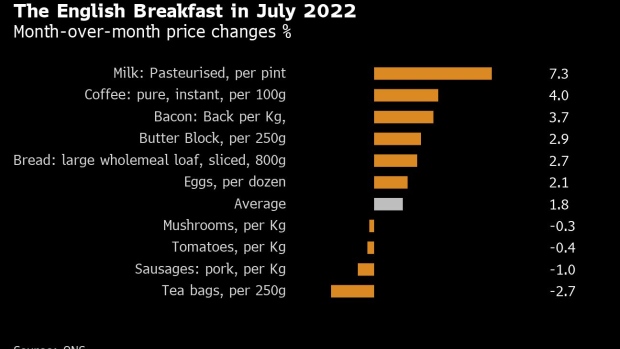 (Bloomberg) -- Britons battling double-digit inflation can’t even turn to the comfort of a fry-up to ease the pain of rising prices.

Bloomberg’s monthly Breakfast Index shows the average price of a traditional full-English has jumped nearly 17% from a year ago, with an increase of 1.8% in July alone.

Crunching data from the Office for National Statistics, the index tracks the prices of some of the key ingredients in an English breakfast - sausages, bacon, eggs, bread, butter, tomatoes, mushrooms, milk, tea and coffee. It gives a glimpse into the real world impact of inflation on consumers with food prices contributing more than energy to the latest leap in everyday costs.

“Eating and heating are basic human needs, yet many hard-working people in our country are at the limit of what they can pay to put food on the table and power their homes,” said Gary Smith, General Secretary of the GMB trade union which has more than 500,000 members. “For so many, the cost of living crisis is rapidly becoming a catastrophe.”

Milk is especially hard-hit as production costs surge to record highs. The UK’s largest dairy producer, Arla Foods, pushed up prices this month citing the impact of extremely dry weather on the cost of feed, fertilizer and fuel.

The figures look even more stark when compared over the past year, with the price of milk leaping more than 40%. The cost of a 250 gram-pack of butter and a kilo of tomatoes jumped more than 20% in the period. Butter grabbed headlines last month when 1 kg tubs of Lurpak started retailing for £9 and were stamped with security tags.

Soaring inflation means grocery prices are now at their highest level since 2008 as Britons grapple with the sharpest fall in real wages on record. Shoppers are increasingly frequenting discount supermarkets and opting for own-label rather than branded goods to save money.

Budget grocery chain Iceland Foods has even started to offer interest-free loans to customers, allowing them to pay for their food in installments.

“More than ever, people are struggling to purchase much needed everyday items during this relentless cost of living crisis,” said Richard Walker, managing director of Iceland Foods.