Britain’s vote to leave the European Union has already come at a cost regardless of where Brexit goes from here. Some of the damage is tangible, such as jobs, investment and capital; some of it less so, like international clout and talent.

Prime Minister Theresa May is aiming to renegotiate the most contentious part of her separation deal with the European Union after it was rejected by Parliament. Officials in Brussels have already warned they won’t even consider her demands. Meanwhile, the threat of economic chaos still looms over her country.

Here’s a look at where there’s been the biggest impact so far.

The City of London has seen a steady outpouring of money and jobs as the world’s biggest financial companies reorient their European footprints to protect business. 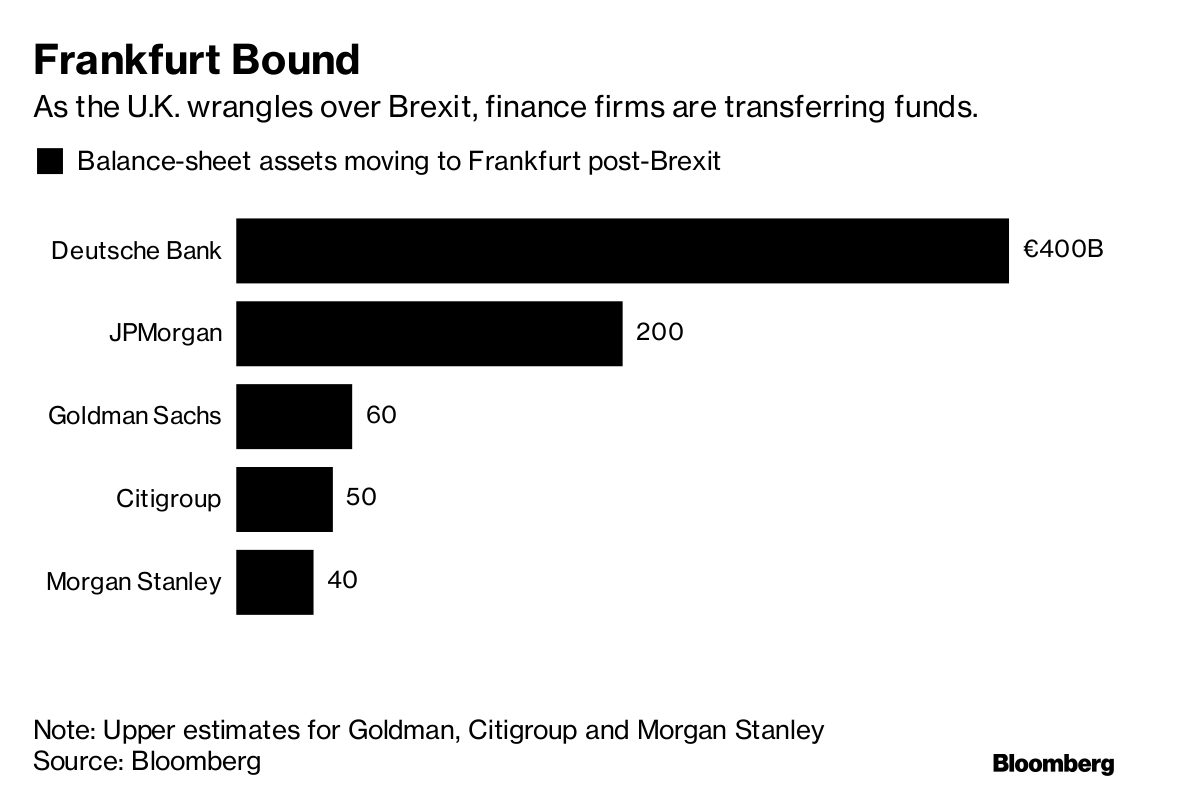 Five of the largest banks looking to serve the continent are transferring 750 billion euros (US$857 billion) of balance-sheet assets to Frankfurt, according to people familiar with the matter. They’ve had to move capital to get EU approval to continue providing services across the bloc.

Exchanges handling daily transactions have also upped sticks or at least reproduced their London services on the continent. CME Group Inc. has moved its US$228 billion-a-day European market for short-term financing, the largest in the region, to Amsterdam. 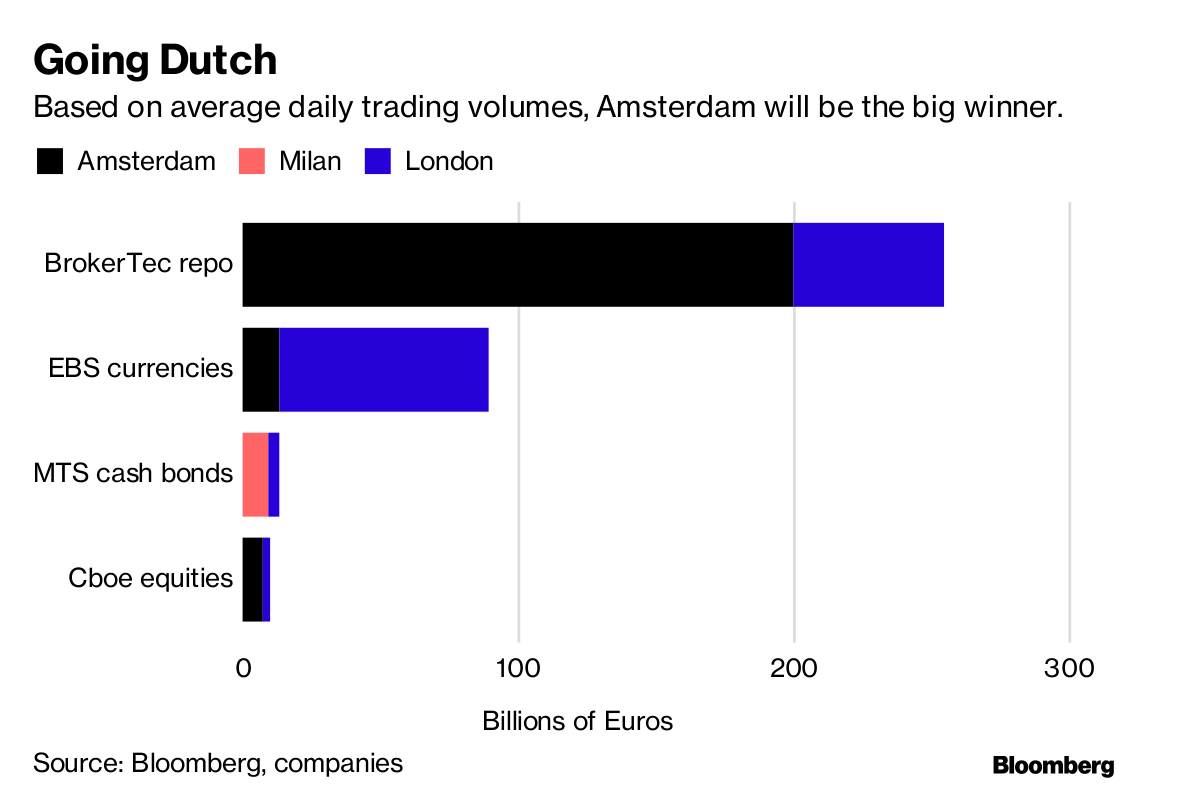 While fewer bankers have left London than first estimated, moves are being made. The world’s biggest banks have outlined plans to transfer several thousand staff to cities such as Paris, Dublin and Madrid. Those personnel shifts are likely to be irreversible, according to TheCityUK, a lobby group.

The pound has declined more than 10 per cent against the euro since Britain voted to leave the EU in June 2016. Exporters may have benefited, but the increasing cost of imported goods and services boosted inflation. The effect is a drop in purchasing power for consumers, making life even more difficult for the nation’s beleaguered retailers.

Businesses have also been deferring spending decisions as they ride out the uncertainty over what form Brexit will take. The Bank of England had forecast zero growth in investment for 2018. Officials have also warned it may not be possible to regain all the lost ground, with central bank policy maker Michael Saunders saying some of it might be a “permanent loss.”

Growth has also taken a hit. A UBS study in September 2017 suggested the referendum had already cost Britain more than 2 per cent of economic output. The damage could be long-lasting, with the economy not predicted to return to its pre-referendum pace of growth until beyond 2020, according to forecasts compiled by Bloomberg.

The departure of the European Medicines Agency to Amsterdam has wounded Britain’s pharmaceutical industry. The agency had been in London for 22 years. 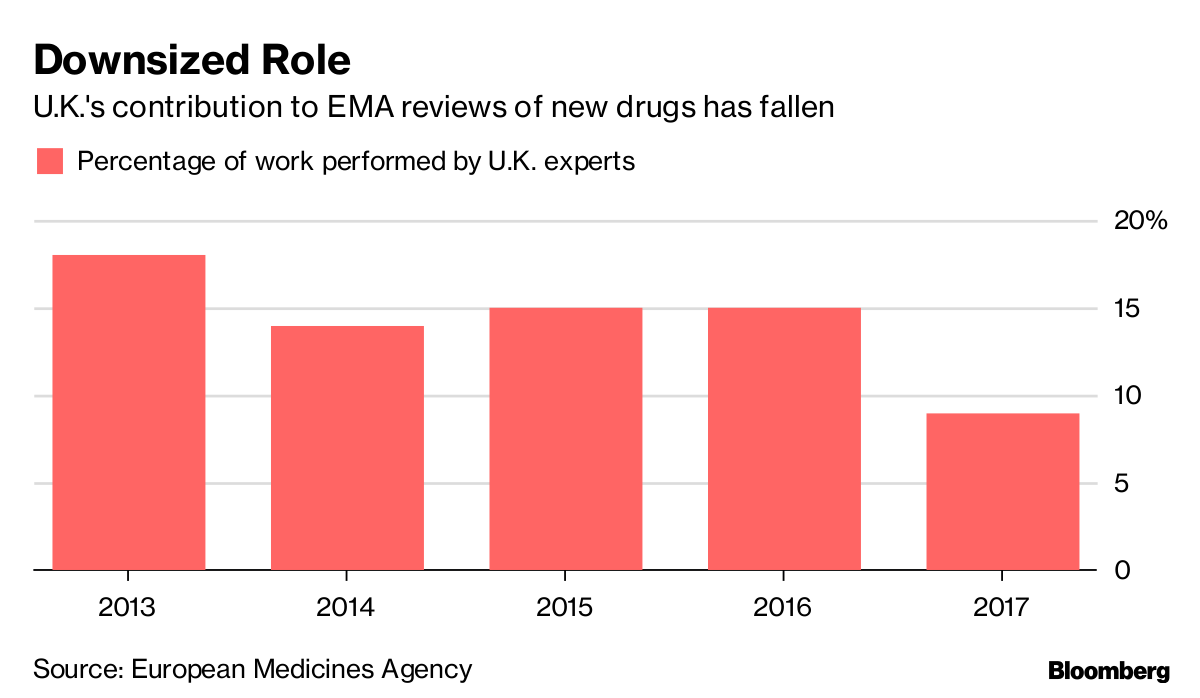 Drug companies have been spending money to expand testing facilities in the EU and safeguard their ability to market across the bloc. The money, the industry argues, could have been spent on developing new treatments.

The EMA, which oversees drugs for about 500 million people, has also stopped assigning work to the U.K.’s pharmaceutical regulator, unsure whether the two organizations will still be collaborating after Brexit.

Net immigration from the EU to Britain has fallen to its lowest level in six years, according to the Office for National Statistics.

That has hurt the hospitality industry, agriculture, construction and the National Health Service. They all face labor shortages and have traditionally relied on EU workers. 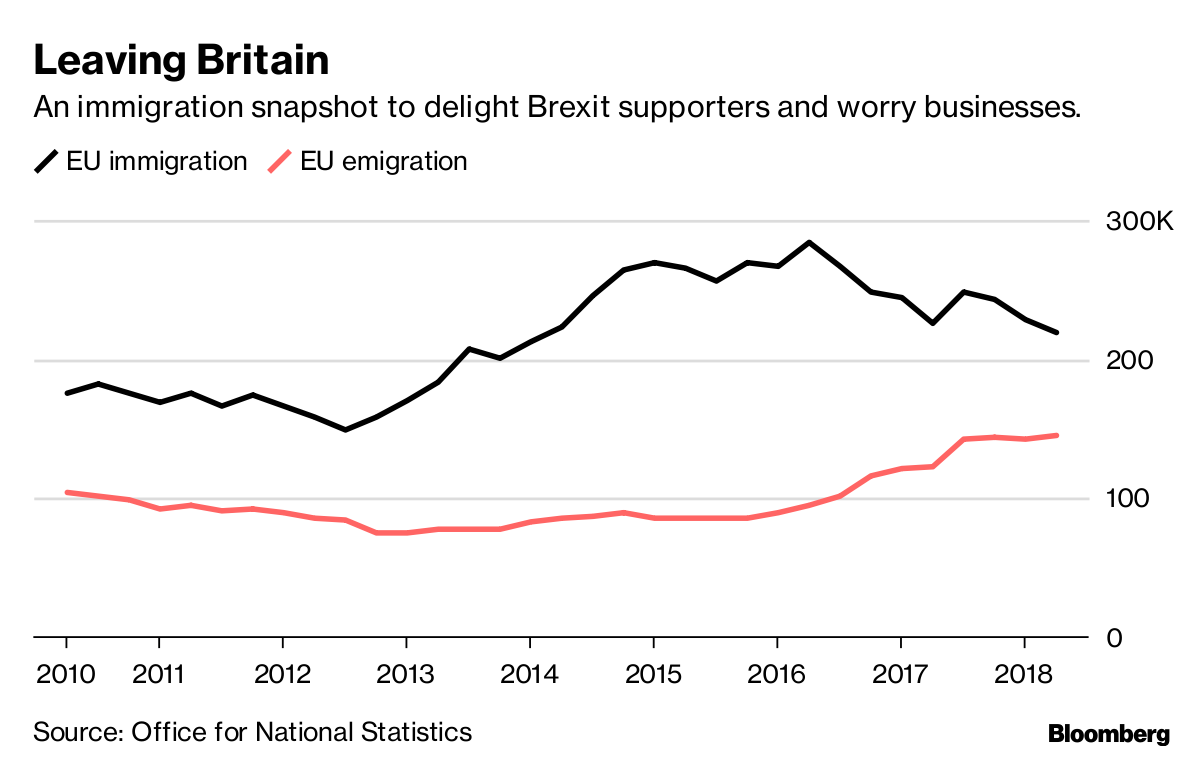 Then there’s higher education. Many are concerned about the impact on international student enrollment and cross-cultural exchanges and learning programs within the EU. Heriot-Watt University in Edinburgh in part blamed Brexit for job cuts in 2017, while Manchester University also cited the uncertainty surrounding Britain’s departure when announcing the need to reduce costs.

A flurry of international media companies has already moved broadcast licenses out of the U.K., not waiting for any resolution to the Brexit impasse in Westminster.

Discovery Inc. and Comcast Corp.’s NBC Universal, which currently use U.K. permits to beam channels across Europe, are among them. Discovery is moving some staff and licences to Amsterdam while NBC Universal has filed applications in Germany.

Even the venerable BBC, the U.K.’s national broadcaster founded in the 1920s, is in talks with Irish and Dutch regulators about transferring some licenses into the EU for its commercial channels.

Brexit uncertainty has hit the U.K. housing market. An index of prices by the Royal Institution of Chartered Surveyors slipped to its weakest level in six years at the end of 2018. 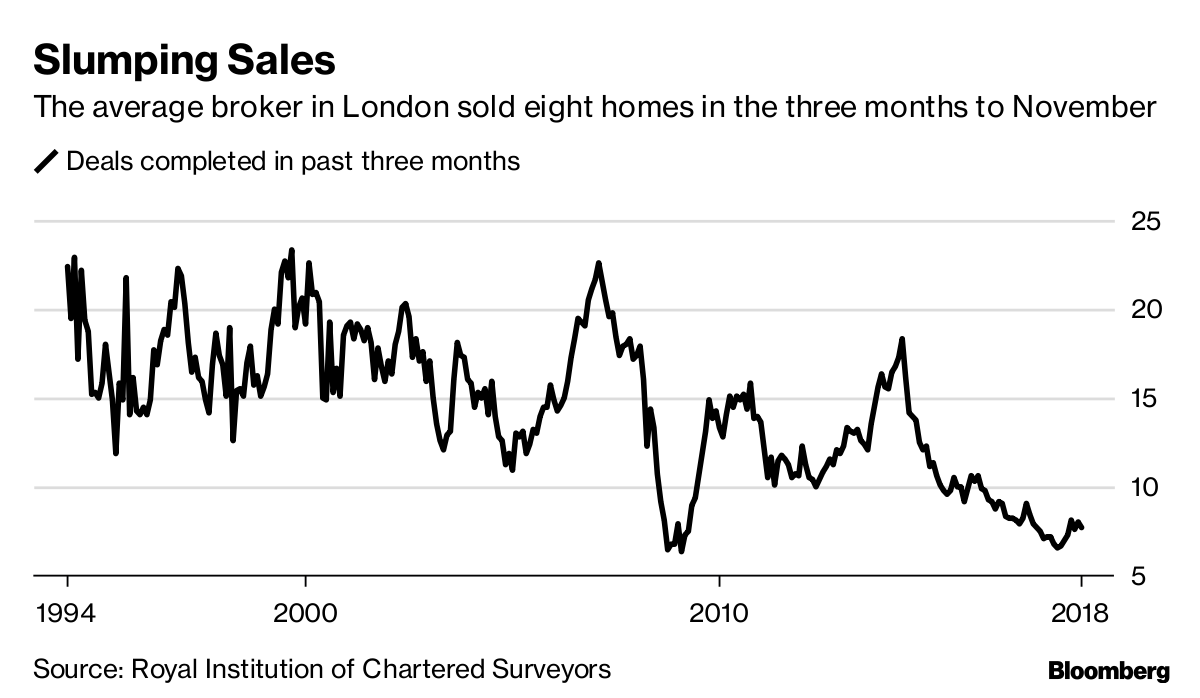 There’s been a particular slowdown in transactions in London, where the number of sales at the end of last year was at the lowest annualized level since RICS began compiling the data in 1994.

Uncertainty about the pound and the economy have exacerbated a decline in sterling’s role in global credit markets. Overseas non-financial companies only sold 7 billion pounds (US$9.2 billion) of notes last year, less than half the amount issued in 2017, according to data compiled by Bloomberg.

Sales of pound-denominated corporate bonds also had their longest drought in nearly two decades at the end of 2018, as borrowers shied away from a market rattled by Brexit uncertainty. The cost of insuring the subordinated bonds of major British banks has also been rising in recent months.

Britain’s status as European hub of choice has suffered a blow. Japanese electronics groups Sony Corp and Panasonic Corp, insurer Chubb Ltd. and money-exchange firm TransferWise are among the companies who have moved their EU headquarters or set up new subsidiaries.