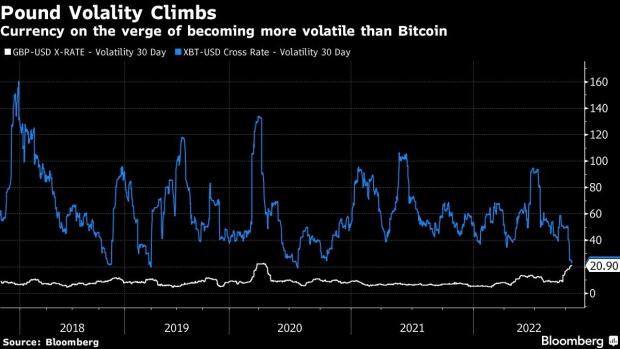 A cash tray holding British pound banknotes and coins in a shop in Barking, UK, on Tuesday, Sept. 13, 2022. As the UK enters a period of public mourning after the death of Queen Elizabeth II, data releases are likely to show a temporary reprieve in inflation and a jump in wage growth. , Bloomberg

(Bloomberg) -- The pound sterling -- regarded as the world’s oldest currency still in use since its inception more than a thousand years ago -- is almost as volatile as new-comer Bitcoin as of late. Here’s a look at the 30-day volatility for both:

NOTE: Felice Maranz writes for Bloomberg’s Markets Live blog. The observations she makes are her own and not intended as investment advice. For more markets commentary, see the MLIV blog.