James Li, a public relations account director, would rather spend an hour sitting in Beijing traffic than risk 30 minutes exposed to crowds on a train. “Traffic is as bad as it could be” but the subway is still too dicey, he said.

In Frankfurt, real estate assistant Anna Pawliczek is driving to work for the first time in her career. “I definitely have always preferred to chill out in the train, instead of being stuck at traffic lights,” she said. But days after Germany ended its lockdown, her company is asking returning employees to avoid public transportation at all costs.

Gasoline demand is rebounding, suggesting that the car — at least for now — is making a comeback. As lockdowns ease and parts of the world reopen for business, driving has emerged as the socially distant transportation mode of choice and is offering some near-term relief to an oil market fresh off its worst crash in history and reeling from an unprecedented collapse in energy demand.

“People are using more their cars because they are afraid to use public transportation,” Patrick Pouyanne, the chief executive of French oil giant Total SA, said.

It’s too soon to say whether this change is permanent. In some parts of Asia that reopened earlier than the rest of the world, people are venturing back onto trains. And it’s unclear whether global gasoline demand will ever fully recover.

But on the streets of Beijing, Shanghai and Guangzhou, morning traffic is now higher than 2019 averages while subway use is well below normal, according to data compiled by BloombergNEF. Volume on Beijing’s metro system is 53 per cent below pre-virus levels. Subway usage in Shanghai and Guangzhou is down 29 per cent and 39 per cent, respectively.

“At least at the beginning of our way back to normality, we expect a decrease in the use of public transportation,” said Josu Jon Imaz, the head of Spanish oil company Repsol SA.

It’s a phenomenon that may begin to reverse the dramatic reductions in air pollution the world’s busiest cities have seen in recent months as travel and industrial operations ground to a halt.

In Berlin, among the first European cities to relax its lockdown, public transit use remains down 61 per cent while the number of people driving has recovered to 28 per cent below normal normal, according to data from Apple Inc., which tracks request for directions on its popular Maps app.

Apple Maps data for 27 world cities shows that driving directions are recovering more quickly than directions for mass transit. In Madrid, driving is 68 per cent below normal levels, up from about 80 per cent in April, while use of public transport remains down 87 per cent, largely the same level as last month.

The same is occuring in Ottawa, the Canadian capital, where driving directions on the app have recovered to 40 per cent of normal levels, up from 60 per cent in April, while directions for mass transit remain flat from April at 80 per cent below normal levels. 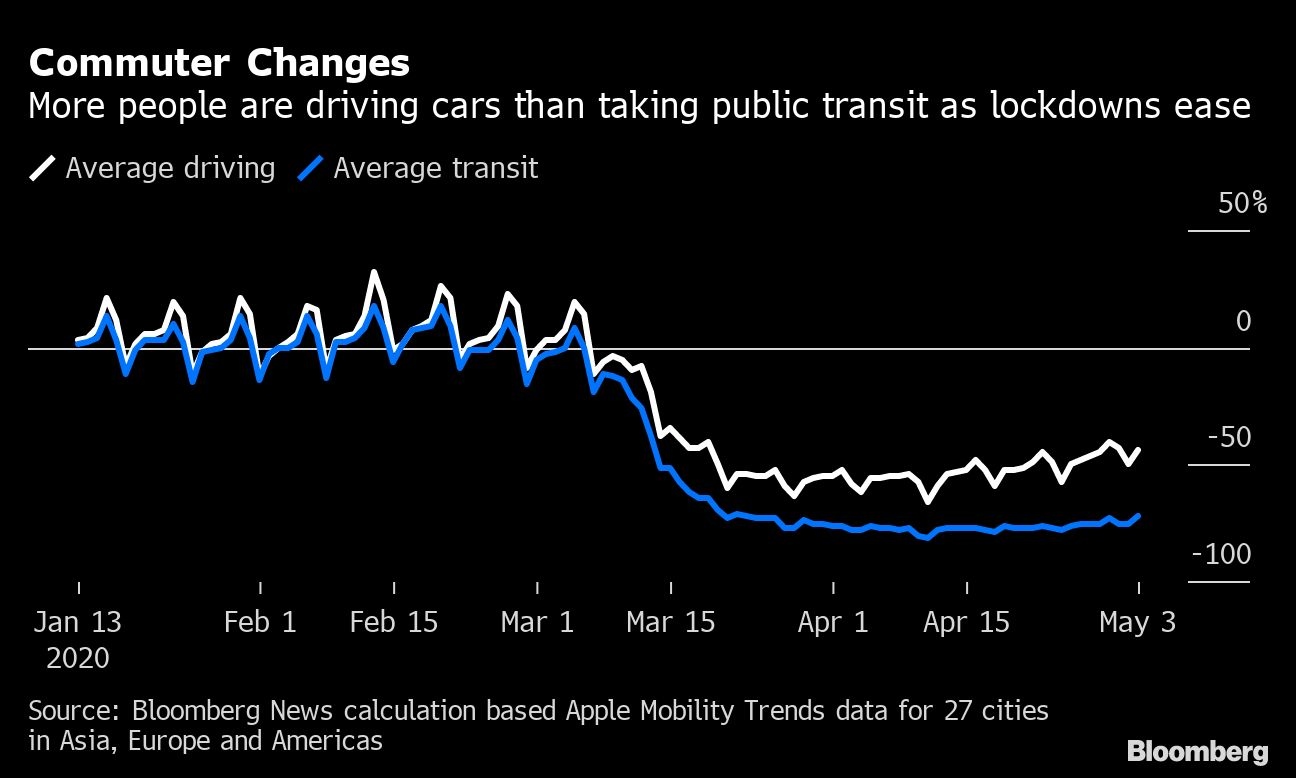 In the U.S., gasoline consumption is clawing back from record lows, rising by 400,000 barrels a day during the week ended May 1. Cities in Florida, one of the first American states to re-open, has seen fuel sales rebound to 30 per cent below normal levels, from 50 per cent weeks ago, according to the Florida Petroleum Marketers Association.

“I think maybe we will get a third of gasoline demand back relatively easy,” said Patrick DeHaan, an analyst at GasBuddy. The rest will come back much more slowly, he said, perhaps taking a year or more. Some demand may never return.

Gasoline’s recovery may extend into summer amid changes in the way people vacation. In the U.S., demand for long-haul recreational vehicles has picked up as people opt for roadtrips over air travel. Jon Gray, chief executive officer of RVshare, said bookings in some areas have more than doubled compared with last year. “We saw an almost overnight doubling of bookings” as lockdowns showed signs of ending, he said.

A similar pattern played out in China during the five-day Labor Day holiday in May. Over the first four days of the holiday, car trips in Beijing jumped 15 per cent, while trips by plane and train in and out of the city fell 76 per cent and 86 per cent, respectively, according to government data.

Amid the post-lockdown revival of the car, electric vehicles are likely to be left on the sidelines as a struggling economy and cheap gasoline stifles demand for cleaner-burning autos. Even under the most optimistic scenario, worldwide sales growth this year will barely exceed 2019, according to BloombergNEF. Depending on how the pandemic plays out, the outlook is even bleaker.

Widespread lockdowns that have shuttered factories and kept people at home stands to reduce global carbon emissions by eight per cent this year, the biggest reduction ever, according to the International Energy Agency. But even that won’t be enough to reverse warming temperatures, which have been rising steadily by an average of almost 2.5 parts per million a year since 2010.

Still, a look at cities that were early to re-open suggests that the spike in driving will be short-lived.

In Seoul, software developer Kim Jingi drove to work for a month and half after restrictions eased, in an effort to self-isolate. But for the last two weeks, Kim has returned to the subway.

“I thought it was safe enough,” Kim said. Also, “it was hard to find a parking spot.”