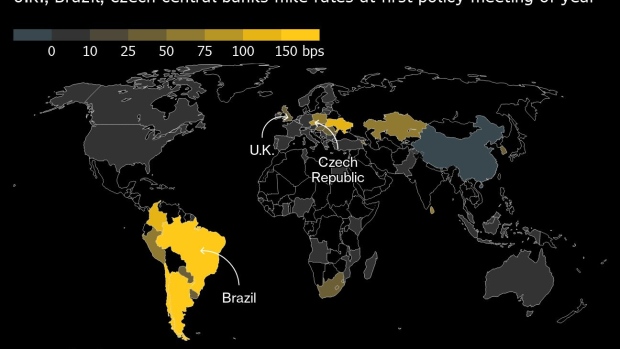 (Bloomberg) -- The carry trade is roaring back in Latin America, home to some of the world’s most aggressive inflation-fighting central banks.

The steep jump in interest rates across the region -- from Chile to Brazil to Mexico -- has stood in stark contrast to the U.S. and Europe, where policymakers are still holding key borrowing costs near zero even as they move closer toward raising rates. That’s delivering big gains to a tactic that seizes on that disconnect: borrowing in the U.S. and Europe, then plowing the cash into countries where bond yields are significantly higher.

The U.S.-Brazil carry trade -- or borrowing U.S. dollars to buy reals -- has returned about 8% in the past month as the Brazilian currency rallied more than any other in the emerging-market world, according to data compiled by Bloomberg. A broader Latin America carry trade index returned 4% in January on the back of strong currency gains in Peru, Chile and Colombia. Another index, which includes investing in South Africa and Russia, has delivered returns this year, too.

“A number of emerging-market currencies could perform quite well against that backdrop,” he said. “When we talk about carry trade, we need to look at those with attractive interest-rate differentials. My favorite candidates are Brazil, Russia, Mexico, South Africa, Chile and Colombia.”

The recent gains mark a reversal-of-fortune for such trades in the developing world, which faced headwinds last year as the U.S. dollar staged its biggest rally since 2015 while Treasury yields and stock prices gained with economic growth surging. That bullish run for the dollar helped to suppress interest in the carry trade even as big gaps in monetary policy emerged last year.

Yet in 2022, the dollar has remained relatively steady. And while bond markets in Europe and the U.S. have been rattled by the specter of rising interest rates, yields there are still well below those in the developing world.

Goldman Sachs Group Inc. is among those backing carry trades, suggesting that investors buy Chilean and Mexican pesos with loans funded in the euro and Australian dollar.

The tactic carries significant risks by leaving investors exposed to potential reversals in the foreign currency markets. That possibility appears particularly acute now, given that European and U.S. bond yields are rising as the Federal Reserve pulls back pandemic-era stimulus and the European Central Bank pivots toward tightening monetary policy. Those rising yields could draw cash away from emerging markets, which in turn could put downward pressure on their currencies and imperil the carry-trade gains.

That’s offset in part by how far emerging-market central banks are ahead of the Fed and the ECB, neither of which has yet raised rates. In Latin America, which has suffered through painful bouts of hyperinflation, central banks have moved aggressively since last year to raise rates, taking a toll on economic growth and pushing Mexico and Brazil into a recession.

But the rate hikes have also driven up many Latin American currencies. And officials have a strong incentive to welcome that -- and keep their currencies from depreciating -- since it can help contain inflation by holding down import prices.

“Monetary policy remains very much on the front foot in emerging markets,” Morgan Stanley strategists including Matthew Hornbach wrote in a note. “If you’re in search of proactive central banks delivering you ever-higher yields, then emerging markets are where you should look.”

Currency-market volatility, which can pose another risk to carry trades, has remained relatively subdued: The JPMorgan Global FX Volatility Index has retreated from the highs seen of late last year and is holding below its two-decade average.

There’s also some doubt about how far the Fed will be able to tighten monetary policy without derailing the economic expansion. Even if it enacts five quarter-point increases this year, as markets have been expecting, the lower band of the overnight target rate would still be just 1.25%. And the narrow gap between short- and long-term Treasury yields indicates concern about a slowdown in growth.

“There could be wealth destruction if the Fed tightens too much,” said Jack McIntyre, a portfolio manager at Brandywine Global Investment Management,  who is overweight emerging-market currencies including the Chilean and Mexican pesos and the Brazilian real. “When the rest of world experiences solid economic growth, the dollar can underperform. And in an inflationary world, central banks and governments tend to welcome, or at least wouldn’t fight, stronger currencies as a way to fight inflation.”