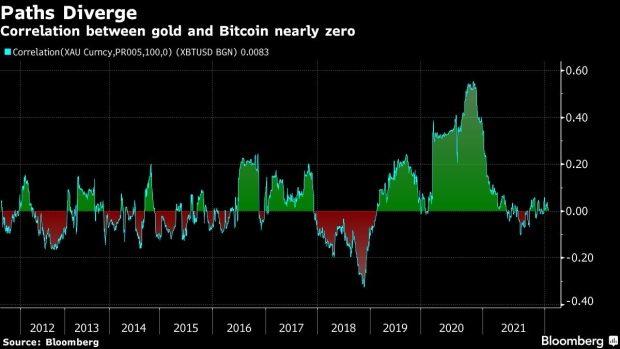 (Bloomberg) -- The argument Bitcoin is a form of “digital gold” is falling apart.

As the world’s largest cryptocurrency slips to $38,000, the lowest price since August, its decline in tandem with risk assets such as tech stocks is casting a shadow on a long-touted similarity to gold.

Cryptocurrencies have plunged alongside equities in a rocky start to the year amid tighter-than-expected monetary policy, whereas gold -- often heralded as a store of value and an inflation hedge -- has steadily traded upward this month at 0.3%

Gold tends to be a low-volatility instrument, according to Steve Sosnick, chief strategist at Interactive Brokers LLC. Meanwhile, cryptocurrencies continue to demonstrate unpredictable price swings. Bitcoin has declined 17% since the start of January.

“If your premise is that you want to buying something as a hedge against distress, boring is great,” Sosnick said by phone. “Right now, I’d argue gold year-to-date is one of your best performing assets.”

Cryptocurrency enthusiasts, including Mike Novogratz, have previously said Bitcoin displays the qualities of gold as an uncorrelated asset. Yet, the 100-day correlation between the Nasdaq 100 and Bitcoin currently stands at 0.4, with a score of 1 representing complete harmony. Meanwhile, the same coefficient between gold and Bitcoin is 0.008 -- barely above zero -- indicting they’re moving only slightly in the same direction.

Earlier this month, analysts from Goldman Sachs argued that Bitcoin could rise to a $100,000 price point, if it could win more of the “store-of value” market from gold. Instead, the digital asset’s signature volatility has come to fore.

As such, Bitcoin cannot be substituted for the same uses of the popular commodity, said Peter Schiff, chief executive officer and chief global strategist of Euro Pacific Capital Inc.

“No one is buying gold to get rich. People buy gold to stay rich,” said Schiff, a long-time Bitcoin critic and gold proponent. “Gold represents a conservative, long-term store of value and inflation hedge: Bitcoin is none of those things.”