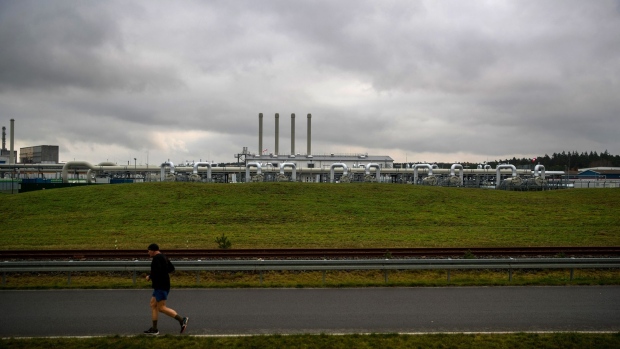 The long buildup to yesterday’s Russian invasion of Ukraine has prompted lots of hand-wringing about Europe’s energy security and what would happen if Russia were to suddenly turn off gas exports going to Europe. But what if, instead, Europe went cold turkey on Russian gas?

The European Union is poised to announce a strategy of weaning itself off Russian gas, part of an ambitious energy plan that includes cutting overall fossil-fuel use 40% by 2030. But it’s one thing to announce a long-term plan. It would be quite another for the EU to cut off Russian gas now.

It wouldn’t be easy. The EU derives a bit over 20% of its total energy from gas, around 40% of that coming from Russia. Total import figures hide some important details: Certain industrial sectors in Europe, like ammonia and fertilizer production, are wholly dependent on gas. And there are large differences across countries. Sweden barely uses any gas, and none from Russia. The Netherlands gets almost 40% of its energy from gas, but it doesn’t rely much on a direct supply from Russia. Central and Eastern European countries are the most exposed by far, to say nothing of Germany, which relies on Russia for over half its gas supplies.

That makes Germany’s recent announcements all the more striking. Chancellor Olaf Scholz halted certification of the Nord Stream 2 gas pipeline, which would have doubled pipeline capacity in the Baltic Sea, pumping Russian gas directly to northern Germany. Economy Minister Robert Habeck later clarified that the halt might mean a delay rather than a full cancellation of the pipeline, but he added there is “the possibility that Germany gets enough gas and enough resources beyond Russian gas imports.”

Europe has just been through a winter of major disruptions in gas supplies. Gas prices more than tripled in the final three months of last year, causing electricity prices to spike in the process. After some easing, largely due to decreased demand from warmer weather, prices shot up again, rising about 50% on Thursday morning alone. Electricity prices were not far behind. Germany now pays over $330 per megawatt-hour, some 10 times more than long-term averages.

Shutting off Russian gas imports would not end Europe’s dependency on fossil fuels overnight. As when Germany decided to sunset its nuclear plants after the 2011 Fukushima disaster, the EU would become more reliant on coal as a result, even increasing CO₂ emissions in the process. (Yes, delaying Germany’s nuclear exit, scheduled to be completed this year, should be considered in the wake of the Russian invasion.) No gas flowing through pipelines from Russia would also mean renewed investments in liquefied natural gas (LNG), which would help lock in that technology.

The green transition was always going to be messy, leading to volatile fossil fuel and power prices, as Columbia University’s Jason Bordoff and Harvard University’s Meghan O’Sullivan have argued forcefully. But much of the gas-price premium right now is driven by uncertainty—not knowing what Russian President Vladimir Putin might do next. That’s especially clear since the amount of Russian gas flowing through Ukraine’s pipelines actually increased yesterday during the invasion.

Ripping off the Band-Aid now would take uncertainty off the table. It would mean front-loading many of the investments that would need to happen regardless. All that does come with large upfront costs borne by ratepayers, shareholders, and taxpayers alike.

The costs would be so high, the European Network of Transmission System Operators for Gas (ENTSOG), charged with stress-testing the EU’s gas network, does not even consider the possibility. Its latest report includes scenarios turning off all supplies from Algeria, Libya and Turkey, relatively minor players in EU’s import mix. It also tests scenarios involving disruptions to Russian gas imports either via Ukraine or via Belarus. Turning off all Russian gas, however, would apparently be a step too far. It should not be.

There was a 17% drop in day-to-day CO₂ emissions at the height of Covid-19 lockdowns in April 2020. The pandemic crash was a horrible template for climate action overall—emissions have since rebounded and then some—but the episode does show the immediate impact of temporary demand-side measures. In the short run, that could mean steps like EU governments shuttering offices through the end of the winter heating season.

The point of stopping the import of Russian gas now, of course, is for the use of it not to rebound quickly. Preventing that would mean ramping up LNG imports over the summer months to be ready for next winter. But LNG, too, must be temporary. Most effort needs to go toward getting off fossil fuels altogether. (Europe, after all, also depends on oil and coal imports from Russia.) That would require massive, sustained investments in insulating buildings, electrifying home heating and transportation, a focus on green hydrogen and an even faster buildout of low-carbon energy sources than climate change alone already warrants.

Addressing climate change justifies many of these costs, amounting to nothing short of a climate-war mobilization. Add an actual war for democracy in Europe on top, and cutting off Russian gas should at the very least be on the table.

Gernot Wagner writes the Risky Climate column for Bloomberg Green. He teaches at Columbia Business School (on leave from New York University). His latest book is Geoengineering: the Gamble (Polity, 2021). Follow him on Twitter: @GernotWagner. This column does not necessarily reflect the opinion of Bloomberg LP and its owners.