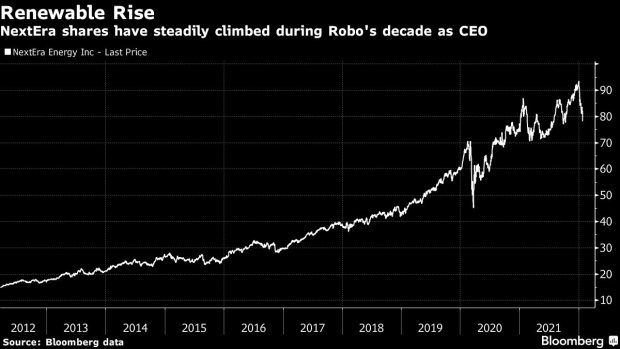 (Bloomberg) -- Jim Robo, who transformed NextEra Energy Inc. from a sleepy Florida utility into a clean-energy juggernaut, is stepping down as the company’s top executive.

NextEra named company veteran John Ketchum as successor, appointing him as president and chief executive officer as part of a series of management changes announced Tuesday that take effect March 1. Robo, who’s also chairman, will become executive chairman for a brief period, and Ketchum, 51, is expected to be appointed to NextEra’s board. The stock fell.

Robo, 59, was instrumental in building NextEra into the biggest U.S. wind and solar company. At one point in 2020, the company had a market value that eclipsed oil giant Exxon Mobil Corp., a clarion sign of the ascendancy of renewables in a world increasingly focused on carbon-free power. Ketchum will take over at a challenging period for the industry as global inflation brings an end to the era of ever-cheaper clean energy that helped fuel NextEra’s expansion.

“There’s no question that Jim accomplished a lot,” Glenrock Associates energy analyst Paul Patterson said in a phone interview. “He does leave shoes to fill, but NextEra develops a lot of internal talent.”

Investors are “slightly cautious” about the transition because Robo is “viewed as a utility/renewables thought leader,” Credit Suisse analyst Maheep Mandloi said Tuesday in a note.

NextEra shares tumbled as much as 4.9% in New York trading, the biggest intraday drop since January 2021, before recovering some losses. Shares were down 3% to $79.43 at 10 a.m. in New York.

Robo began working at NextEra in 2002 after executive roles with General Electric Co. and Strategic Planning Associates, a management consulting firm. The Harvard graduate joined just as the company began to expand beyond its roots as a Florida utility and grow into a clean power giant.

An early deal showed the company’s new focus and Robo’s skills leading the transition -- he negotiated a deal with his old employer, GE. NextEra had a contract to buy natural gas turbines from the conglomerate, even though the market for gas plants was in decline. The utility convinced GE to rejigger the deal and allow it to buy wind turbines instead.

Ketchum has been with NextEra for 19 years. He was appointed chief financial officer in 2016 and three years later became head of the firm’s renewables development unit NextEra Energy Resources as well as president of its NextEra Energy Partners project holding company.

Before joining NextEra in 2002, Ketchum was corporate counsel for TECO Energy Inc. He also worked in corporate banking and as a tax lawyer in Kansas City, Missouri.

“I believe there is no company better positioned to lead our country’s energy transformation than NextEra Energy,” Ketchum said in a statement.

Other leadership changes announced include: