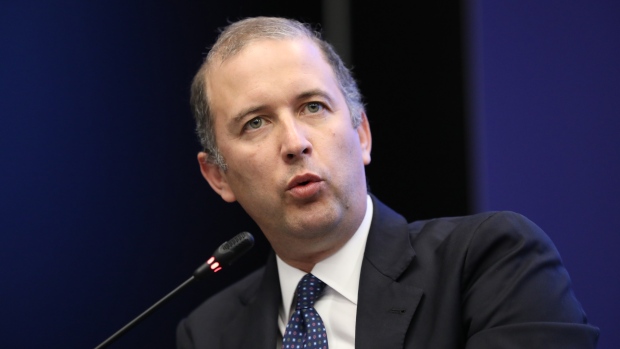 Marco Alvera, chief executive officer of Snam SpA, speaks during a panel session at the St. Petersburg International Economic Forum (SPIEF) in St. Petersburg, Russia, on Thursday, June 6, 2019. Over the last 21 years, the Forum has become a leading global platform for members of the business community to meet and discuss the key economic issues facing Russia, emerging markets, and the world as a whole. Photographer: Andrey Rudakov/Bloomberg , Bloomberg

(Bloomberg) -- Hydrogen could supply a quarter of Italy’s energy demand by the middle of the century as part of an effort to green the economy, the chief executive at the country’s natural gas pipeline operator said.

The estimate developed by Snam SpA and the consulting firm McKinsey & Co. adds to momentum to develop the world’s most abundant element as an alternative for natural gas and other fossil fuels. Unlike wind and solar power, hydrogen is easily stored and can generate the intense heat needed by industrial processes including manufacturing steel and cement.

Hydrogen’s attraction is that it leaves only water vapor when burned instead of the carbon dioxide blamed for global warming. While hydrogen is derived from natural gas, cleaner methods of making it are declining in cost and putting it in the frame for a clean energy solution.

“I used to be a hydrogen skeptic,” Marco Alvera, Snam’s chief executive officer, said in an interview in Rome. “While I love it for its versatility and the possibility to transport and store it easily, I felt it was not achievable because of its cost.”

Now, he said the cost of making green hydrogen could fall to as little as $25 a megawatt-hour assuming there’s widespread adoption of the technology by 2050.

The executive’s optimism about hydrogen also reflects concern within the gas industry that governments are moving to limit fossil fuel emissions and will hit gas soon. That raises the risk that the investments they’ve made in pipelines, compressors and storage tanks could become stranded assets.

The industry has quietly been injecting hydrogen into networks to see how it could shift toward the greener fuel. Gazprom PJSC in Russia has experiments running on some of its network in Siberia. In Italy, Snam will double the amount of hydrogen it blends into the grid to 10% by the end of this year from about 5% now.

Alvera urged government officials and regulators to give the gas industry a some sort of support in using more hydrogen. Currently, in many places, regulations limit the amount of hydrogen that can go into the network since many home appliances and industrial users couldn’t cope with more. For now, a small amount of hydrogen can integrate withouth affecting most customers.

Adding more hydrogen to the existing natural gas network could help scale up the green-gas industry. Alvera said increasing the blending rate to 6% or 7% across Europe could prompt a price drop to about $50 dollars a megawatt hour for hydrogen. That would be the point where hydrogen becomes competitive for industries like steel and transport.

“Winning the hydrogen challenge could be a great opportunity for Italy,” Prime Minister Giuseppe Conte said speaking at an event in Rome Thursday. “Hydrogen is the first pillar of the government’s green new deal, on which we are working with the utmost determination.”

Plans by some European governments to increase the cost of producing carbon emissions could also accelerate the process.

Germany’s climate cabinet said last month that green hydrogen would play a central role in “rebuilding” Germany’s industrial base as it moves to zero emissions by 2050.

Some energy-intensive sectors like steel and aviation which are already using so-called gray hydrogen made from methane and coal could be among the first adopters of the green version of the source, Alvera said.

And while the industry is waiting for economies of scale to impact pricing, investors have already smelled an opportunity.

“Investors love it. There is a lot of liquidity out there for green projects, a lot of green finance, and a lot of access to capital,” Alvera said.

(Updates with Conte in eleventh paragraph)

--With assistance from Dan Liefgreen.

To contact the reporter on this story: Chiara Albanese in Rome at calbanese10@bloomberg.net

To contact the editors responsible for this story: Chad Thomas at cthomas16@bloomberg.net, Jerrold Colten, Reed Landberg