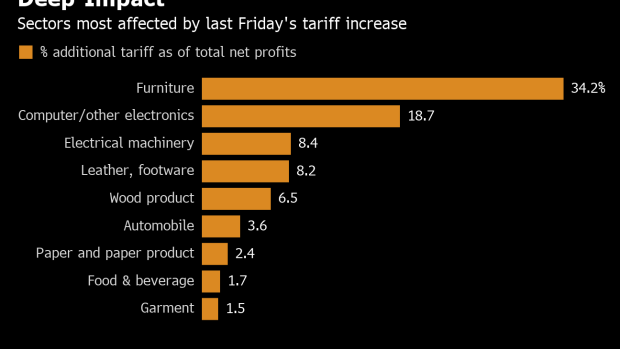 The earnings growth of non-financial mainland-listed companies could drop by about 4.2 percentage points over 12 months on the back of last Friday’s move by the U.S. to raise tariffs on $200 billion worth of Chinese imports, according to China International Capital Corp. analysts Wang Hanfeng and Zhou Changjie. For those listed overseas, they forecast the drag to be 5.1 percentage points.

Washington has followed up with a threat to apply 25% tariffs to another $300 billion worth of Chinese goods, covering virtually all imports from the country. That puts obvious pressure on exporters of those products, while companies within the global supply chain are also at risk of losing orders if multinationals shift operations to countries such as Vietnam to lower costs and avoid tariffs.

The weaker yuan caused by trade tension is also hurting companies with piles of dollar-denominated debt, including airlines and real-estate firms. The big three carriers -- Air China Ltd., China Southern Airlines Co. and China Eastern Airlines Corp. -- closed between 5.8% and 7.1% lower in Hong Kong on Tuesday when markets reopened for the first time since the tariff increase.

For Caroline Maurer, head of Greater China equities at BNP Paribas Asset Management, the impact of the escalation in the trade dispute should be “manageable” because Beijing -- which has retaliated with higher levies on U.S. goods -- is likely to step up its easing measures to offset the impact on economic growth. Still, some areas won’t escape unscathed.

“Sectors that are going to be the most impacted are sectors related to the global supply chain, such as China’s electronics,” she wrote in an email.

Here’s a look at some of the most exposed goods:

Apple Suppliers and Other Tech

To contact the reporter on this story: Jeanny Yu in Hong Kong at jyu107@bloomberg.net

To contact the editors responsible for this story: Sofia Horta e Costa at shortaecosta@bloomberg.net, Will Davies, Kana Nishizawa