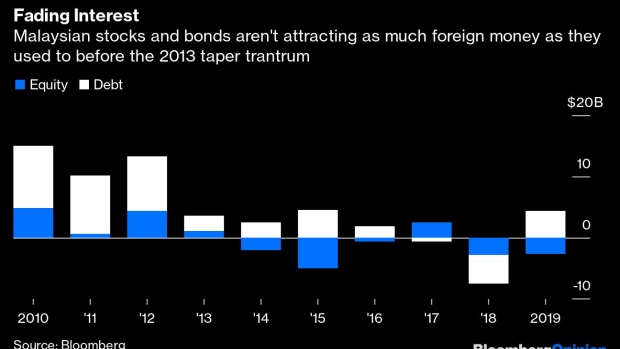 (Bloomberg Opinion) -- After being ruled by effectively the same coalition for 61 years, Malaysia just witnessed the alternative collapse in less than two. The crisis sparked by the shock resignation of the 94-year-old prime minister, Mahathir Mohamad, and how it’s resolved will grab all the attention for now. But the arrival of short-cycle politics will cast a long shadow over the Southeast Asian nation and investors will reset their antennae.

Mahathir ruled from 1981 until retirement in 2003, only to return 15 years later to cause the biggest electoral upset in Malaysia’s history. But while his latest government did make an early attempt to remove politicians from state-linked companies and disallow “support letters” that help favored businessmen win contracts, institutions in Malaysia remain far too unreformed and weak to withstand prolonged political flux.   What happens next is unclear, though an investment recovery this year can be easily ruled out. Mahathir might yet cobble together the 112 lawmakers needed to form the next government.  Or, he may back someone other than Anwar Ibrahim, to whom he was supposed to hand over the top job after about two years. But the prime minister obviously didn’t like his new partner and old enemy enough to commit to a transition date. (Mahathir fired Anwar, who was his chosen successor, in 1998 during the Asian financial crisis. Anwar was imprisoned on convictions of corruption and sodomy that he said were a plot to remove him from politics).

The 72-year-old Anwar could take a shot at power, though he looks resigned to not becoming the eighth prime minister of independent Malaysia. “Maybe the ninth,” he said at a prayer ceremony at his home as the fall of Mahathir’s government looked imminent. His party, which was allied with Mahathir in an unwieldy coalition, has split. Economic Affairs Minister Azmin Ali, who was also jockeying for the top job, left with a small breakaway faction of 10 other lawmakers.The long-ruling Barisan Nasional regime, which was Mahathir’s political home before he fell out with his successors, is now back in the frame. Backing Mahathir — or his appointee — against Anwar may be the best chance for its elites to revive the old order. The coalition lost its stranglehold on power in 2018 because of popular disgust against then-premier Najib Razak over a scandal in which $4.5 billion was allegedly stolen from the 1Malaysia Development Bhd, or 1MDB, state investment company and laundered around the world. Najib is on trial for a range of related crimes; the former prime minister rejects the allegations against him.Whatever the outcome, it looks likely that the new dispensation will seek legitimacy by aligning itself with the Malay-Muslim majority. The ethnic Chinese and Indian minorities, which had long hoped that Anwar would get a chance to fulfill his promise of making economic entitlements needs-based, rather than centered on race, will be disappointed. Decades of pro-Malay policies forged in great part under Mahathir have encouraged rent-seeking while prompting young, educated and disillusioned minorities to seek their fortunes elsewhere.When it comes to spawning new-age digital companies, the country is lagging behind its neighbors. Smaller Singapore and poorer Indonesia are both doing better, despite Malaysia making an early start to industrialize its traditional oil and plantation economy. Any emerging coalitions will be too vested in the status quo of public construction contracts to seek a course correction.

Unstable administrations also tend to be myopic about spending and taxation. One of the first things Mahathir did upon his May 2018 return was to scrap the goods and services tax, which had lowered Malaysia’s budgetary reliance on its aging oil fields. The GST was deeply unpopular because it was perceived to have raised the cost of living. But Malaysia’s high investment-grade rating probably won’t survive the global electric-vehicle revolution without more diversified sources of government revenue. It’s unclear how committed a new finance minister will be to medium-term fiscal goals.

What should investors make of this muddle? Most of the reassessment may occur in the price of the currency as foreigners get cold feet. Malaysian government debt, on the other hand, might remain in demand from local retirement funds.

A slowing economy, which is already starting to weigh on the under-performing equity market, could support bonds. The coronavirus outbreak in China, which absorbs more than a fifth of Malaysian exports, is threatening to crush gross domestic product growth this year to 3.5%, according to ING Groep NV, its slowest since the global financial crisis.But just as neighboring Singapore rolls out billions of dollars in fiscal relief to mitigate the impact of the epidemic, decision-making in Kuala Lumpur is suddenly imploding, with Mahathtair continuing only as interim prime minister. The economy this year could well become an early victim of Malaysia’s shortening political cycle.