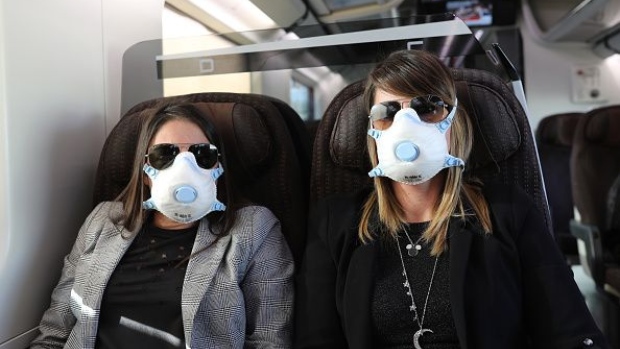 MILAN, ITALY - FEBRUARY 25: Two passengers wear protective masks as they travel on a train from Rome to Milan on February 25, 2020 in Milan, Italy. The country is struggling to understand how it went from six coronavirus cases to 374 cases and 12 dead since last Friday, becoming Europe's worst-affected country. Many communities across the Lombardy and Veneto regions have seen the suspension of public events and church services, and the closure of grade schools, universities and museums. Twelve towns have been locked down entirely, with road blocks preventing the exit and entrance of people. The government has also imposed quarantines for those who have had close contact with confirmed cases of the illness. (Photo by Marco Di Lauro/Getty Images) , Photographer: Marco Di Lauro/Getty Images Europe

(Bloomberg Opinion) -- At this stage, no one can specify the magnitude of the threat from the coronavirus. But one thing is clear: A lot of people are more scared than they have any reason to be. They have an exaggerated sense of their own personal risk.

The best answer goes by an unlovely name: “probability neglect.” Suppose that a potential outcome grips your emotions, maybe because it is absolutely terrifying, maybe because it is amazingly wonderful. If so, there is an excellent chance that you will focus on it -- and pay far less attention than you should to a crucial question, which is how likely it is to occur.

Hsee and Rottenstreich contend that when an outcome triggers strong negative emotions, people tend not to think a whole lot about the issue of probability.

Something similar happens when an outcome triggers strong positive emotions. That’s one reason that state lotteries make so much money. True, people are highly unlikely to win. But vivid advertisements, pointing to the amazing things that lottery winners can do, are highly effective, and for one reason: The advertisers benefit from probability neglect, and so get a lot of people to waste their money on lottery tickets.

Turn to the coronavirus in this light. The situation is very fluid, but as of now, most people in North America and Europe do not need to worry much about the risk of contracting the disease. That’s true even for people who are traveling to nations such as Italy that have seen outbreaks of the disease.

Still, the disease is new, and it can be fatal. That’s more than enough to trigger probability neglect.

There are two implications. The first is that unless the disease is contained in the near future, it will induce much more fear, and much more in the way of economic and social dislocation, than is warranted by the actual risk. Many people will take precautionary steps (canceling vacations, refusing to fly, avoiding whole nations) even if there is no adequate reason to do that. Those steps can in turn increase economic dislocations, including plummeting stock prices.

The second implication is that the best response to excessive fear is to put the issue of probability on people’s view screens, and to do so directly and explicitly.

Suppose that residents of a midsize city are alarmed about the risk, perhaps because false rumors are flying, perhaps because one person or a few people in the area have been diagnosed with the coronavirus. It is likely that for residents of that city, the risk of infection is really low and much lower than risks to which they are accustomed in ordinary life – say, the risk of getting the flu, pneumonia or strep throat. Informing people of that fact is likely to calm people down.

The human costs of a possible pandemic go well beyond public health. They are social and economic – and a product of human psychology. Public officials, and others in positions of leadership, need to get to work to reduce those costs, starting with an understanding of the potentially devastating consequences of probability neglect.

To contact the author of this story: Cass R. Sunstein at csunstein1@bloomberg.net

Cass R. Sunstein is a Bloomberg Opinion columnist. He is the author of “The Cost-Benefit Revolution” and a co-author of “Nudge: Improving Decisions About Health, Wealth and Happiness.”