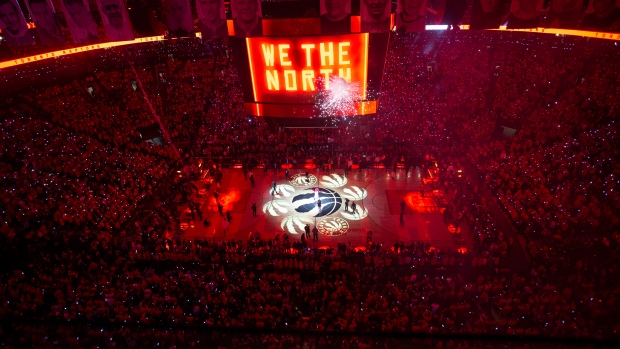 The court is illuminated at Scotiabank Arena ahead of the first half of Game 2 of the NBA Finals between the Toronto Raptors and the Golden State Warriors in Toronto on Sunday, June 2, 2019. , The Canadian Press

We The North mania spread across Canada as the Toronto Raptors created history as the first Canadian team to win an NBA championship, and businesses attempted to capitalize on the frenzy. Some came out on top earning the goodwill of fans, while others garnered negative publicity.

Here's a look at some of the business winners and losers of the Raptors' championship run.

Scotiabank paid a whopping $800-million in 2017 for the naming rights to the arena where the Raptors play. The deal later expanded to include its subsidiary, Tangerine, becoming the official bank of the basketball team.

On playoff game days and the day after, Tangerine experienced a 50 per cent spike in website traffic and saw a 20 per cent jump in the number of customers who signed up for an account, said Scotiabank spokesman Doug Johnson.

When the NBA season started last fall, only six per cent of Raptors fans were aware of Tangerine, he added. That grew to 40 per cent by the start of the playoffs and is now well over 50 per cent.

In less than 24 hours, Cineplex decided to arrange to view the final series games at some of its theatres so fans could enjoy a communal place to rally around the Raptors, said Sarah Van Lange, the company's executive director of communications.

By the championship game, it was streaming the game at 45 theatres around Canada and seven of its Rec Room locations, she said. Customers had to pick up free tickets at the box office to attend the screenings and most were at capacity.

Though Cineplex did not charge fans to attend the viewings or show advertisements before the show, Van Lange considers the move a win for the company.

"One of the biggest returns for us was the sense of goodwill with our guests, and providing a venue and a location for them to have a shared experience around the Raptors," she said, adding Cineplex would do it again "without question."

McDonald's Canada ran a season-long promotion giving fans free medium fries the day after a game where the Raptors scored 12 three-pointers or more. Customers had to have the McDonald's app and redeem the offer between 11 a.m. and 4 a.m. the day after the game at participating Ontario restaurants, according to the company's website.

In the 2017-18 regular season, before the promotion, the Raptors made an average 11.8 three pointers a game, according to the team stat's page on the NBA website.

After the acquisition of superstar Kawhi Leonard, the team averaged 12.4 three pointers a game in the regular season.

After the lengthy playoff run, the company gave away more than 2 million orders of fries -- far surpassing their projected number of 700,000 fries during the regular season, said spokesman Adam Grachnik in an email.

Though that's more than it budgeted for, "the promotion had a very positive impact" on the app with a 26 per cent increase in users based in Ontario since the promotion started, he said.

Eateries showing the final series cashed in as fans opened up their wallets.

Between 7 p.m. and 2 a.m. ET on the eve of game five, bars in downtown Toronto that use a Moneris payment processing terminal saw a 93 per cent spike in spending than during the same time the previous year, according to data from Moneris. Across Canada, that figure was a jump of 63 per cent.

Data for game six spending would be available Wednesday, wrote spokesperson Jesse Patterson in an email.

However, not all companies came out ahead. Some experienced negative publicity or upset fans.

Bell faced the wrath of Raptors fans after its Fibe TV feeds went dead in the final minutes of games 5 and 6.

The company's customer support Twitter account was flooded with complaints during the sixth and final game when people trying to watch the game saw an error message instead.

The company said a technical issue caused the outage both times and apologized to customers. It said it has been in touch with affected customers to offer a credit.

Nike experienced some negative publicity when one of the Raptors' star players, Leonard, filed a lawsuit in early June against the athletic-wear retailer. He alleged the company is blocking him from using a logo that he believes he owns.

Leonard, who was a Nike endorser until 2018, claims in the lawsuit that Nike filed a copyright application for a logo he designed, known as his klaw logo, and did so without his knowledge or consent. Nike allegedly told the athlete to stop using the logo, while he is preparing to use it on several products connected with sports camps and charity functions.

Nike has previously declined to comment on the case, saying it does not discuss pending litigation.