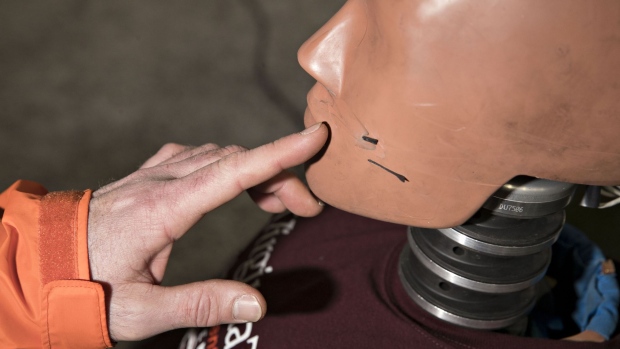 Cuts from drone blades are seen on the face of a crash test dummy after test experiments are performed with unmanned aerial systems (UAS) on the campus of Virginia Tech in Blacksburg, Virginia, U.S., on Tuesday, Feb. 14, 2017. There is little disagreement that the small- and medium-sized drones flooding the U.S. market can cause serious injury or even death in a worst-case scenario. That's why aviation regulators, academic institutions and would-be users are racing to measure the actual dangers of unmanned aircraft in hopes it will help them devise ways to minimize the risks to people and traditional aircraft. Photographer: Andrew Harrer/Bloomberg , Bloomberg

The new dummy, known as Q3, represents the average weight and height of a 3-year-old child. NHTSA said the Q3 “will provide more realistic data about the effect side impact crashes have on children” because it was specifically designed for testing child seats in such crash tests.

The agency said it is also proposing new federal rules to require that child car seat labels encourage that youngsters remain in rear-facing child seats until they outgrow the height and weight limits of those seats.

“Every child’s life is precious, and the Department’s work will save young lives,” Transportation Secretary Elaine Chao said in a statement.