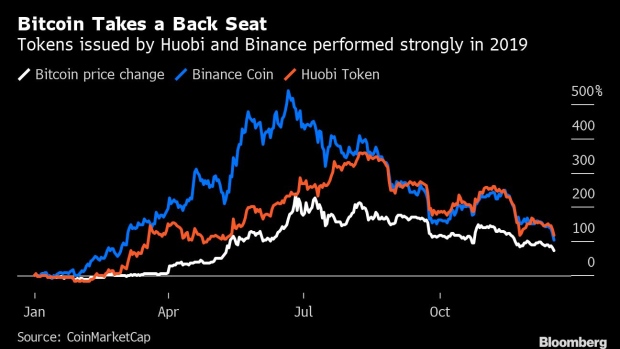 (Bloomberg) -- Leon Li is the rarest of Chinese crypto magnates -- one who’s won Beijing’s backing. The founder of Huobi Group is now set to play a pivotal role in China’s effort to build a homegrown crypto-industry.

The former Oracle Corp. coder, who started one of the world’s largest Bitcoin exchanges six years ago, enjoys unusual access to China’s central bank and government officials thanks to methodical engagement and measured expansion. While rivals Binance and OKEx irked regulators by stoking Bitcoin mania, Li curried favor by discouraging speculation, co-founding the country’s first state-backed blockchain platform along the way. Huobi even set up a Communist Party committee in-house -- a first for any crypto firm.

That’s why, keen to explore homegrown alternatives to Facebook Inc.’s Libra and a Western-led blockchain, Chinese central bank and government officials are turning to Li -- among others -- to help develop a local blueprint for crypto supremacy. The still-nascent blockchain arena offers the world’s second-largest economy a rare chance to become an early influencer. Washington’s concerted campaign to contain China has only strengthened Beijing’s resolve to wean itself off American technology.

“Once in a lifetime,” said Li, a bookish-looking 36-year-old with thick black glasses. “It’s my hope that we’ll not just be a participant but a driver, even the leader of blockchain history.”

Read more: Why China’s Rushing to Mint Its Own Digital Currency: QuickTake

Li co-founded Huobi in the fall of 2013 and later received backing from well-connected ZhenFund and Sequoia China. But the tale of how he and Huobi came to occupy its privileged position really begins in 2017, at the height of Beijing’s paranoia about the potential for unchecked Bitcoin speculation to foment social upheaval.

Word trickled down to Li in the summer of that year that officials were preparing a major crackdown on the industry. His instinct was to rush back from medical leave and instruct his team to get Huobi’s almost 2 million registered users to withdraw their funds. But he also began delivering daily progress reports to local regulators and briefed officials whenever requested.

Watching his counterparts collapse like dominoes, he realized that regulators meant life-or-death in his world. Li’s since made it his mission to get on Beijing’s good side, from hosting seminars and classes for officials to organizing conferences under the auspices of local government.

In addition to consulting for the People’s Bank of China on Libra, Huobi more recently threw itself behind research into blockchain applications that serve the real economy -- a passion project of President Xi Jinping. It’s one of 14 founding members of China’s first state-backed blockchain platform -- an effort led by the country’s top economic planner that will power everything from storing digital contracts to tracing food and drug deliveries. Other members include state enterprises like China Telecom Corp. and China UnionPay Co.

“Huobi could play an important role in the local crypto industry, because authorities would probably prefer to see trade go through an entity that they trust, rather than being pushed underground,” said Emily Parker, co-founder of Asia-focused blockchain data site and incubator LongHash. Good relations with Beijing “could be viewed as a sign of stability, as well as a local advantage over a company like Binance, which does not appear to enjoy the same level of trust.”

Those years of cultivation paid off during a late-2019 clampdown. While Binance and its co-founder got tossed off Chinese microblogging site Weibo and other outfits got shut down, Huobi emerged unscathed. As the crackdown wound down in December, Li hosted a days-long conference on the fast-liberalizing southern island of Hainan that serves as his second base after Beijing, in a show of support for local government efforts to become a global hub for blockchain technology.

At the event, Li pledged to lend his company’s cloud and blockchain expertise to nations participating in Xi’s signature Belt and Road Initiative, and called on his country to counter Libra. “From the perspective of safeguarding national financial sovereignty, autonomy and control are really important issues,” he told delegates. “Can we rely on ourselves to build something as good as Libra?”

A spokeswoman for Binance said its larger user base is among its key advantages over Huobi. OKEx representatives declined to comment for this story.

In the years since Binance and other competitors fled China, Huobi was one of the few major crypto businesses that stayed put and thrived. True, he moved Huobi’s main exchange business to Singapore. But the company’s blockchain consultancy and training arm, Huobi China, remains in-country and around 100 staffers work out of sleek offices built on reclaimed wasteland on Hainan.

That unit -- which the company says is profitable -- has instructed more than 1,000 students from Party cadres to executives at state-owned and private companies. Huobi’s own senior executives, Li included, are based in Beijing, as are key teams from coding to business development. His exchange is estimated to have raked in roughly $680 million in revenue for 2019, according to Bloomberg calculations of data by Huobi on token buybacks.

Success has come at a cost of personal freedom for Li, who was born into a working-class family in central China and graduated from Beijing’s prestigious Tsinghua University -- Xi’s alma mater. After China shut down exchange trading, the heads of Chinese crypto platforms were reported to have been banned from departing the country. Li said he’s never received any official notice prohibiting him from leaving China but he’s chosen not to, unsure of the risks that would entail.

In the longer term, his company’s closeness with Beijing could also be a liability.

“Huobi may be aiming for a global leadership role in the industry by molding to regulatory requirements,” said Matthew Graham, chief executive officer of Sino Global Capital, a Beijing-based blockchain consultancy. “Certainly one risk is that this could lead to a loss of trust with overseas customers.”

To contact the reporters on this story: Zheping Huang in Hong Kong at zhuang245@bloomberg.net;Colum Murphy in Beijing at cmurphy270@bloomberg.net