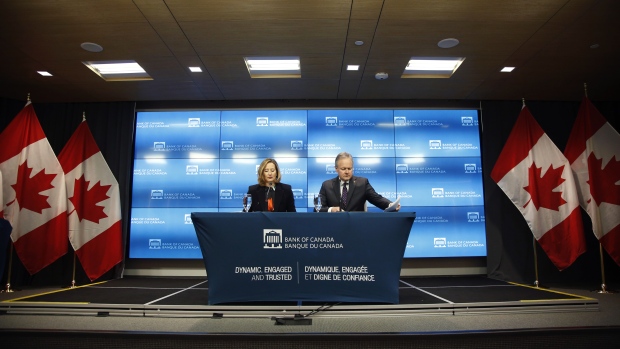 Stephen Poloz, governor of the Bank of Canada, and Carolyn Wilkins, senior deputy governor at the Bank of Canada, left, arrive for a press conference in Ottawa, Ontario, Canada, on Wednesday, Jan. 22, 2020. The Bank of Canada held interest rates steady, but expressed heightened concern about an economy that has slowed more than expected, suggesting officials are becoming less confident in a year-long holding pattern. , David Kawai/Bloomberg

Bank of Canada Governor Stephen Poloz got the attention of markets and the media yesterday when he said the door is “obviously” open to a rate cut, depending on how data evolves. While it should be pointed out central bankers don’t typically slam the door shut on standard policy options, it was a reminder (in the words of BMO Economics) that “the BoC is concerned that the consumer may be faltering further.” So the questions become: is the private sector ready to pick up the slack? What would it take to convince the central bank to cut? And what would that do to already-high household debt levels and the housing markets?

CANADIANS ON WORLD STAGE IN DAVOS

A pair of big Canadian names are in the spotlight today at the World Economic Forum. We’re looking forward to RBC CEO Dave McKay sitting down with our Bloomberg partners later this morning (which we’re aiming to simulcast live at 9:45 a.m. ET). And already today, Finance Minister Bill Morneau chatted with Francine Lacqua, who asked him point blank if Canada will still be producing oil in 2050. Morneau started his response by saying, “I can’t predict the future.” He also discussed the outlook for ratifying the new NAFTA and economic uncertainty. Notably, he said “we’ll keep managing those … risks, the risks around household debt we’re concerned with.”

The World Health Organization resumed its emergency meeting today to determine whether the respiratory illness emanating from China constitutes a public health emergency of international concern. Meanwhile, Wuhan is being quarantined and some major Lunar New Year celebrations in China are being called off. At least 17 deaths are being blamed on the virus and China has confirmed at least 571 cases. We’ll be mindful of any commentary on the topic from U.S. airlines reporting earnings today, including American, Jetblue and Southwest.

-The SNC-Lavalin scandal is getting a special shoutout (for all the wrong reasons) from Transparency International in its annual global ranking of corruption in the public sector. Although described as a consistent “top performer”, Canada was docked four points compared to last year.

-Rona Ambrose made it official yesterday that she will not run to replace Andrew Scheer as leader of the Conservative Party of Canada, citing her involvement in the private sector and her desire to advocate for the country’s energy industry.

-Also from late yesterday: VW will pay a $196.5M penalty after pleading guilty to charges in this country on the emissions scandal.

-Procter & Gamble shares are drifting lower in the pre-market after a mixed picture in its second-quarter earnings release. The conglomerate raised its full-year sales and profit growth forecasts and Q2 earnings exceeded estimates, but there appears to be some disappointment about the sales figures for the quarter.