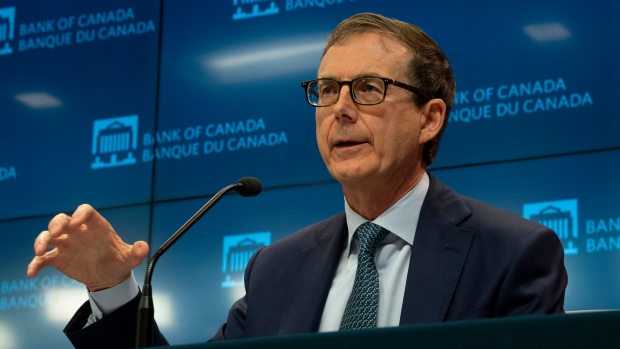 Bank of Canada Governor Tiff Macklem responds to a question during a news conference, Wednesday, July 15, 2020 in Ottawa. The Canadian Press/Adrian Wyld

It's decision day for the Bank of Canada, with plenty of signs pointing to a taper amid a strengthening economy. Deputy Governor Toni Gravelle appeared to brace Bay Street for scaled-down quantitative easing in a speech last month. CIBC's global head of fixed income currency and commodities recently told clients this is shaping up to be "the most telegraphed policy announcement of the year,” while predicting the government bond purchase program will be shaved down to $3 billion per week from $4 billion. Beyond that, no doubt Governor Tiff Macklem will be pressed on hot housing markets when he addresses reporters. We'll be watching for adjustments to the central bank's growth forecasts as it takes stock of substantial fiscal spending programs at home and in the U.S.

NO LOVE LOST ON THE RAILS

We’re used to seeing boilerplate ho-hum language in press releases surrounding takeovers. So Canadian Pacific Railway’s framing of CN’s “illusory and inferior” proposal for Kansas City Southern as being “massively complex and likely to fail” certainly grabbed our attention late yesterday afternoon. It mostly comes down to a question of competition as far as CP is concerned. But it’s also making things somewhat personal, with a warning that CN’s management “has significant underperformed over a decade and has a track record of underdelivering against its own projections.” And, new this morning: CP released a letter sent by its attorney to the U.S. Surface Transportation Board, pleading its case to the U.S. regulator.

The pandemic boom that helped pad Netflix’s subscriber base came to a screeching halt in the most recent quarter as the streaming giant added less than 4 million new paying users. There’s no immediate relief in sight as it expects to sign up just 1 million more in the current quarter. It’s all about content, and on that front, Netflix is expecting subscriber growth will “re-accelerate” in the second half of this year amid what it’s calling “a very strong back-half slate” (one would hope so, considering the company said it’ll spend more than US$17 billion on material this year).