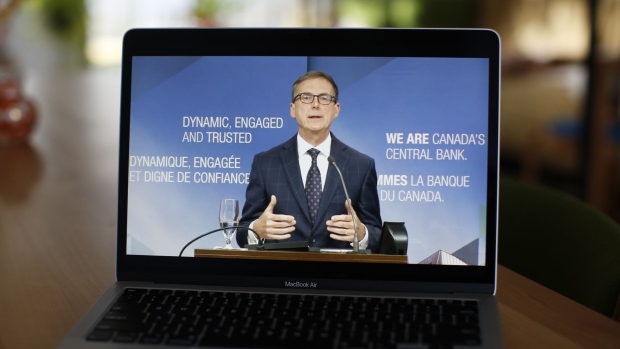 Tiff Macklem, governor of the Bank of Canada, speaks at a Global Risk Institute event seen on a laptop computer in Ottawa, Ontario, Canada, on Thursday, Oct. 8, 2020. , Bloomberg

Global stocks are under pressure this morning as fears about COVID-19’s impact on the economy ripple across markets. Much of the attention today is focused on Germany, where the DAX has been down as much as 3.5 per cent as Chancellor Angela Merkel calls for a one-month shutdown of bars and restaurants in her country. U.S. futures, meanwhile, are pointing to a weak open at 930 a.m. ET.

The Bank of Canada delivered more news this morning than we anticipated. Most notably: the quantitative easing asset-buying program is being scaled down to ~$4 billion per week from the current rate of $5 billion. The bank also said it will tilt more toward actively scooping up longer-term bonds. And we’re also getting a signal that rates are on hold until about three years from now. “The Governing Council will hold the policy interest rate at the effective lower bound until economic slack is absorbed so that the 2 percent inflation target is sustainably achieved. In our current projection, this does not happen until into 2023.”

IN CONVERSATION WITH CHRYSTIA FREELAND

We’ll flip to the fiscal side of the COVID-19 policy response at 2 p.m. ET when we go one-on-one with Chrystia Freeland for the first time since she became Canada’s deputy prime minister and finance minister. She’ll join us after delivering what her office has described to us as her first major economic address at the Toronto Global Forum. There’s so much for us to cover with her. Don’t miss it.

Major European indices are under pressure this morning, with Germany’s DAX falling more than three per cent, amid persistent concern about COVID-19’s impact on the economy. One of today’s catalysts appears to be German Chancellor Angela Merkel’s call for a one-month shutdown of bars and restaurants in her country. U.S. futures, meanwhile, are pointing to a weak open at 930 a.m. ET.

IN CONVERSATION WITH CALPERS' CEO

Really looking forward to Amanda Lang's discussion this afternoon with Marcie Frost, chief executive of the California Public Employees' Retirement System. Better known as CalPERS, a hugely influential institution with US$413.7 billion in assets. As a point of reference, the Canada Pension Plan Investment Board's AUM was US$434.4 billion at the end of June.

COGECO CEO ON THE QUARTER AND ALTICE-ROGERS

We’ve got Philippe Jetté lined up to shed light on maintaining operational focus while the cable company’s board attempts to thwart the unsolicited takeover bid by Altice USA (with Rogers in its corner). One thing is clear on the operational side from last night’s fourth-quarter results: the broadband service provider is benefitting from the work-from-home lifestyle, particularly in the U.S. where revenue growth outpaced domestic gains. We’ll dig into the quarter and Cogeco’s strategy with Jetté at 4 p.m.

BIG TECH IN THE HOT SEAT

The chief executives of Facebook, Twitter and Google will address the U.S. Senate Commerce Committee this morning on the issue of their protection from online liabilities via Section 230 of the U.S. Communications Decency Act. The session could yield fireworks. We'll keep tabs on it.

-Microsoft shares are slipping in pre-market trading despite the company beating fiscal first-quarter profit and revenue expectations. Cloud-based offerings were once again the driver, with revenue in the Intelligent Cloud division surging 20 per cent.

-TC Energy this morning announced US$1.6 billion in contracts with unions for work on the construction of Keystone XL. Notably, of course, this comes ahead of U.S. elections that could very well determine the pipeline’s fate.

-First National Financial shares will be on our radar today after the lender raised its monthly dividend and also announced a special $0.50/share payout to investors while reporting a 36 per cent surge in third-quarter mortgage originations.

-Toronto City Council today is expected to throw its support behind a motion calling for the province to put a cap on food delivery service fees. Read all about it here