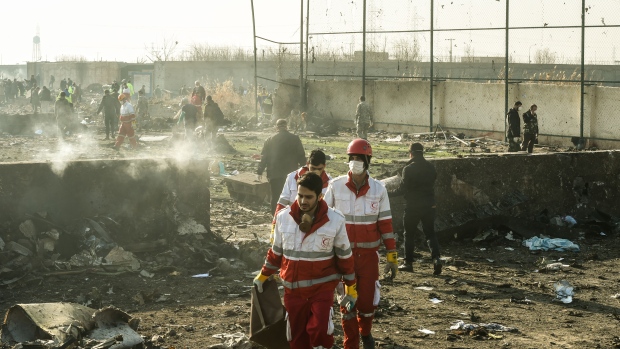 Sixty-three Canadians are dead following a plane crash in over Tehran. A Boeing 737-800 jet flown by Ukrainian International Airlines crashed minutes after taking off from Iran’s capital. Initial reports suggest the cause of the crash was engine failure and no connection is seen between the hostilities between Iran and the United States. For Boeing – still reeling from two crashes last year involving its now-grounded 737 Max jets — the tragedy raises further questions about the safety of its aircraft. On that note, the aircraft maker said yesterday it is recommending simulator training for all pilots on the 737 Max prior to that jet’s return to service. Shares of Boeing are down in premarket trading.

Markets are assessing the latest developments from Iran, which fired more than a dozen missiles last night at U.S. airbases in Iraq in retaliation for the killing of a top military general. While initial market reaction was drastic, investors seemed to have calmed down since then. The next question for investors is how the U.S. will react. For his part, U.S. President Donald Trump tweeted “all is well” and says he’ll make a statement today in Washington, which we’ll keep an eye out for.

In a press conference that was almost as dramatic as his escape from Japan, former Nissan CEO Carlos Ghosn told reporters in Beirut that he fled to Lebanon because he was presumed guilty of financial crimes he didn’t commit and was mistreated by Japanese prosecutors. He also used the opportunity to skewer his former employer. Equally interesting was what he didn’t say: how exactly he fled Japan. So what did Ghosn’s heartfelt plea actually accomplish? We’ll get perspective from our Bloomberg partners.

-Loblaw is closing two distribution centers in Ottawa and Laval over the next two years, resulting in hundreds of layoffs

-EG Group is evaluating a bid for Caltex Australia Ltd., potentially putting it in a takeover battle with Canadian convenience-store giant Alimentation Couche-Tard Inc., whose initial bid for Caltex was rejected.