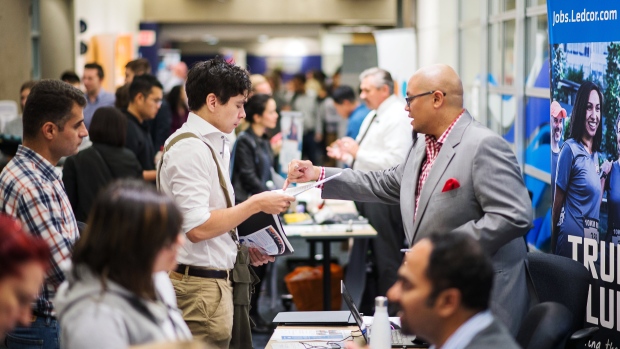 A representative speaks to a job seeker during the Vancouver Job Fair, presented by Work BC and operated by YWCA Metro Vancouver, in Vancouver, British Columbia, Canada, on Wednesday, Sept. 26, 2018. , James MacDonald/Bloomberg

2019 turned out to be a strong year for hiring in Canada. Statistics Canada says 320,000 jobs were added last year, the most since 2007. In December alone, the Canadian economy added 35,200 positions, better than expectations of a 25,000 gain. The unemployment rate dropped to 5.6 per cent while wages grew 3.8 per cent, slower than economists forecast. There were job gains in the private sector but losses in the public sector. Job gains were led by Ontario, and Quebec, while B.C. saw a drop in jobs. Meantime south of the border, the U.S. economy gained 145,000 jobs, lower than forecasts.

Stock markets around the world have touched new all-time highs today, as investors around the world react to an easing of tensions in the Middle East and focus instead on prospects for improved global economic growth. This morning, the MSCI World Equity Index – which tracks stocks around the world – has hit a record high. Yesterday in Toronto, the S&P TSX Composite hit a new high, and south of the border, so did the Dow Jones Industrial Average, the S&P 500 and the Nasdaq Composite. Today, we’ll ask investing professionals if they believe the gains can continue.

Lou Eccleston is leaving his post as CEO of TMX Group, saying he believes it’s in the best interest of the company if he retires early. His current contract was set to expire in December. This comes after allegations of sexual misconduct at his previous employer Bloomberg LP were raised in a Business Insider story in November. TMX Group said an investigation by the board – led by an independent investigator – found no evidence he engaged in misconduct while employed at TMX and it’s concluding the investigation “to avoid further distraction to the company.”  The company’s CFO John McKenzie was named interim CEO until TMX can find a replacement. Bloomberg LP's news division is a content partner of BNN Bloomberg.

Canada, the U.S. and the U.K. all say there’s evidence that shows Ukrainian Airlines flight 752  — which crashed over Tehran and killed 63 Canadians — was shot down by a surface-to-air missile. Prime Minister Justin Trudeau told reporters yesterday that the hit “may well have been unintentional”, and stressed the need for a full and through investigation before making any more conclusions. However, Iran’s Civil Aviation Organization says it is “certain” that the plane was not hit by a missile. Canadian officials have been invited by Iranian authorities to take part in the crash investigation and are planning to travel to Iran.

-Corus reported a jump in profit and revenue in the first quarter.

-GFL is acquiring American Waste’s solid and liquid waste businesses in Michigan and Pennsylvania for an undisclosed price.  The deal is expected to close in February

-CAE shares hit a record high yesterday on news that it has already begun to make full simulators for the Boeing 737 Max. This comes after Boeing said earlier this week it’s recommending 737 Max pilots have flight simulator training.