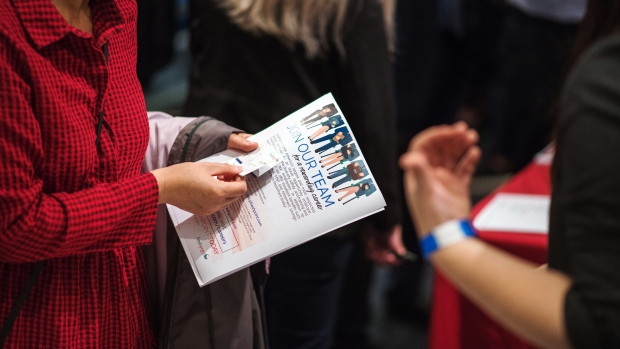 A job seeker holds a pamphlet during the Vancouver Job Fair, presented by Work BC and operated by YWCA Metro Vancouver, in Vancouver, British Columbia, Canada, on Wednesday, Sept. 26, 2018. , James MacDonald/Bloomberg

Canada's red-hot labour market took a breather last month as the econonmy unexpectedly shed almost 2,000 jobs. All of the losses were in full-time work, but the country's eldest workers escaped relatively unscathed as employers added more than 31,000 employees aged 55 and up. And the unemployment rate for that demographic fell to 4.7 per cent.

IN CONVERSATION WITH LOU ECCLESTON

With its stock already up 61 per cent this year, TMX Group seems to be doing just fine despite Canada’s well-documented IPO woes. The exchange operator leaned on double-digit growth in its derivatives business to power essentially in-line performance in the third quarter. And it’s also bumping up its quarterly dividend six per cent. Amber Kanwar and Jon Erlichman will go in-depth on the exchange business with CEO Lou Eccleston in The Open.

GAP STRUGGLES TO FIND ITS WAY

Remember when Gap was all the rage? Unfortunately for Art Peck, he didn’t find a way to revive the struggling retailer and so he’s on his way out as CEO. The company’s malaise was underscored late yesterday by lower same-store sales at each of its banners in the third quarter and a weaker full-year profit forecast. Shares are falling in pre-market trading.

AND SECOND CUP AIMS FOR REFRESH

Much like Gap, Second Cup has also struggled to find relevance in a crowded business. So, today it announced a corporate restructuring that includes the formation of a new parent company, dubbed Aegis Brands, that will hold the coffee chain and hunt for acquisition opportunities in that sector as well as in general foodservice and cannabis. The company also reported a 2.9 per cent drop in third-quarter same-store sales.

-CIBC announced this morning it will sell a majority stake in its FirstCaribbean business to GNG Financial Group. The deal is valued at US$797 million, including US$200 million in cash (CIBC is providing financing to cover the balance). CIBC says it will book a $135-million loss in the fourth-quarter based on goodwill tied to FirstCaribbean.

-Magna International swung to a net loss in the third quarter and cut its full-year sales forecast. The General Motors strike was a factor on both fronts, while the quarterly loss can also be blamed on hefty impairment charges and losses on the company’s investment in Lyft.

-Enbridge outpaced profit expectations in the third quarter and reaffirmed its full-year cash flow forecast. Between the numbers, the company today also vowed to file a new application for Mainline tolls “as soon as practical” and warned of a potential cost overrun for Line 3 depending on when the controversial replacement project enters into service.

-Amazon announced it will open a fulfillment centre in Lachine, QC. The site will open ahead of next year’s holiday season and will employ at least 300 workers.

-Walt Disney Co. will be a stock to watch this morning after beating profit estimates on the back of a 52 per cent revenue surge in its studio business (thanks to The Lion King). The company also announced its soon-to-launch Disney+ service will be available on Amazon devices.