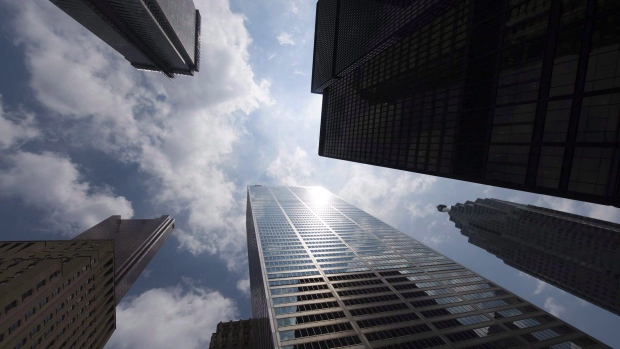 Remember when Steve Eisman (of The Big Short fame) said he was shorting some of Canada’s banks? Or when Nigel D’Souza at Veritas Investment Research became known as Bay Street’s bear on the banks with sell recommendations on each of the Big Six? Perhaps they were feeling some vindication yesterday when Stefanie Marotta at Bloomberg News flagged that the TSX’s commercial banks subgroup had slipped into bear market territory. Sure, the group finished the day just shy of that threshold, with a peak-to-trough loss of 19.9 per cent, but that’s a rounding error. We’ll continue exploring the outlook for Canada’s banks today as recession fears whip across economies. And we’re looking forward to speaking with D’Souza at 3:30 p.m.

ALMOST HALF OF CANADIANS LOST FAITH IN BANK OF CANADA: SURVEY

Another day, another survey demonstrating the financial pain that so many Canadians are feeling. Forty-five per cent of respondents to an Angus Reid Institute survey that was conducted earlier this month said they're worse off financially than a year ago, compared to 39 per cent in the first quarter of this year. The survey suggests the skyrocketing cost of living is taking a toll on Canadians' confidence in the Bank of Canada: 41 per cent of respondents said they don't trust the central bank to fulfill its mandate of keeping inflation around two per cent. Respondents' political stripes play an important role in sentiment on that front: 59 per cent who said they voted for the Conservative Party of Canada in last year's election said they don't trust the BoC. Shachi Kurl joins us shortly after 9:00 a.m. to discuss the findings.

Great line from Purpose Investments Chief Investment Officer Greg Taylor yesterday toward the tail end of another volatile session for equities: “It feels now like it’s the computers selling more than people, and this is a time for active managers and people to step in and pick out the winners,” he told Jacqueline. He also called gold “a real frustrating” trade, and shouted out Tourmaline Oil and Cenovus Energy as quality names. As for today, futures are indicating it could be a higher open in New York. After getting thrashed yesterday, we’ll continue to keep an eye on the copper miners as the price of the underlying commodity stabilizes this morning.

The U.S. Federal Reserve said after markets closed yesterday that all the banks subjected to its latest stress test passed; meaning they’d have sufficient capital to withstand a cataclysmic shock. (Deep-in-the-weeds sidebar that’s notable for domestic consumption: At an aggregate level, the key capital ratio is seen falling almost three points to 9.7 per cent. Of the Canadian banks whose U.S. divisions were included in the exercise, TD walks away looking best, with a projected capital ratio of 15.0 per cent, while RBC’s is seen at 10.6 per cent, and BMO at 10.1). Now the question becomes which big U.S. banks will shower their shareholders with dividend hikes and buybacks. We’re being told to expect announcements about that as early as Monday.

Statistics Canada said today there were 1,001,100 job vacancies at the start of April, it was the second straight month when employers had more than 1 million unfilled positions. Getting more granular: the data agency said there were a record-high number of vacancies in Alberta and Ontario; and, at a sector level, there were record vacancies in six sectors, led by construction.