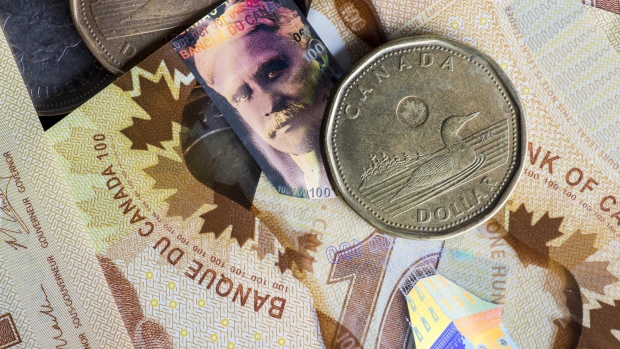 Loonies, and Canadian one hundred dollar banknotes are arranged for a photograph in Ontario, Canada. , Brent Lewin/Bloomberg

Canada's economic slowdown continued in August, although not quite as sharply as economists feared. Gross domestic product rose 1.2 per cent (economists were expecting 0.9 per cent), compared to 3.1 per cent in July. The biggest standout sector in August was Arts, Entertainment and Recreation, which notched a 13.7 per cent growth surge thanks to an easing of restrictions. Educational services was also notable with a 3.4 per cent gain. And sticking with recent practice, Statistics Canada is offering a flash estimate for September, which shows the slowdown is poised to continue with a 0.7 per cent GDP increase last month.

It’s been three weeks since the government unveiled a 2.0 version of commercial rent relief, and yet the subsidy program is still awaiting legislative approval. We’ll try to get an update on the timeline for implementation and perspective from business owners who are stuck in limbo.

Where to begin in the parade of letdowns? Apple shares have been down about five per cent in pre-market trading as record fiscal fourth-quarter revenue gets overshadowed by a nearly 30-per-cent plunge in the company's China revenue and a sharp drop in iPhone revenue. Amazon.com Inc. shares are also slumping despite a tripling in third-quarter profit. Not even CEO Jeff Bezos’s prediction of “an unprecedented holiday season” is enough to distract from some disappointing financial forecasts. Facebook’s stock is slumping, too, amid a decidedly cautious tone to an earnings release showing revenue soared 22 per cent in the latest quarter. CFO Dave Wehner is warning of “a significant amount of uncertainty” ahead. And Twitter’s quarter landed with a thud thanks to meager user growth. Google’s parent company is the outlier, with Alphabet shares climbing more than five per cent thanks to an ad-based revenue boom that helped it trounce expectations.

Keep on BNNBloomberg.ca today for a couple of actionable tee-ups for the Nov. 3 elections. David-George Cosh has a look at the tremendous stakes for the cannabis industry and Jon Erlichman has a round-up on how investors are positioning for various scenarios that could play out on Tuesday.

Ontario released new COVID-19 modeling information late yesterday afternoon showing the province appears to be on track to avoid the previously feared worst-case scenario. But it’s the data about where the virus has already spread that tells an equally important story. It shows just three per cent of cases in Toronto since Aug. 1 can be traced to Gyms & Sports, while 14 per cent of infections are related to restaurants, bars and clubs. Check it out on Slide 14 here; we’ll look into how this might influence the government’s thinking with a week to go until the initial 28-day period of Stage 2 restrictions expires.

-SNC-Lavalin swung to a third-quarter loss as revenue dropped 18 per cent year-over-year and while the engineering firm continues its overhaul. CEO Ian Edwards noted in the release that his team is launching a further review of legacy litigation issues relating to lump-sum turnkey contracts.

-The tough times for Exxon Mobil continue, as the oil giant reported a US$680 million loss for its third quarter this morning. The company is also telegraphing capital spending in a range of US$16-$19 billion next year, compared to US$23 billion this year, and also warned that it may need to book a "significant impairment" on certain gas fields.

-Prem Watsa’s Fairfax Financial suffered $27.3 million in losses on its investments in the third quarter, mostly because of short bets that went wrong. Interestingly, the big conglomerate also management to post $47.2 million in income from its restaurant and retail operations despite the pandemic.

-Imperial Oil is touting cost management as a saving grace in its latest quarter. The big integrated oil producer managed to post a small profit in the period as downstream operations offset an outright loss in the upstream division. Imperial also scaled down its 2020 spending target to US$900 million from an earlier range of US$1.1-$1.2 billion.

-Hexo could be a stock to watch today after the pot producer announced an 8:1 share consolidation. The company is upfront with the rationale: it needs to get its share price back to US$1.00 to regain NYSE listing compliance.