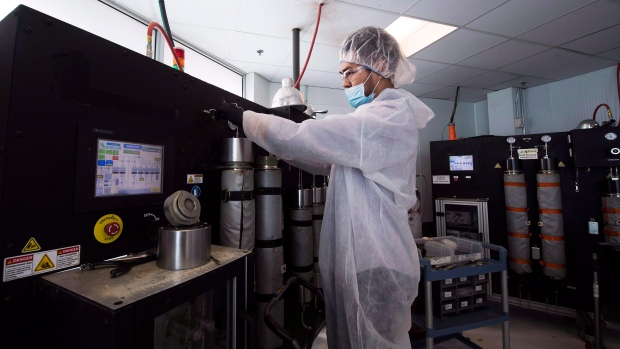 CannTrust employees work in the cannabis extracting laboratory at their packaging and extraction facility in Vaughan, Ont., on Wednesday, Dec. 19, 2018. , THE CANADIAN PRESS/Nathan Denette

CannTrust Holdings’ regulatory woes are going from bad to worse after the embattled cannabis producer said its Vaughan, Ont. manufacturing facility has been deemed non-compliant by Health Canada. That’s based on numerous infractions, including insufficient security and activities that weren’t approved by the federal regulator. It’s the latest in a long list of setbacks for CannTrust, which has been in turmoil since the initial non-compliant report was disclosed in early July -- and it’s sending the company’s stock into a tailspin in pre-market trading.

Jimmy Pattison wants to privatize Canfor. The offer at $16 per share was made via Great Pacific Capital Corp, part of The Jim Pattison Group’s sprawling empire, and represents a nearly 82 per cent premium to Friday’s closing price. No surprise that it isn’t subject to funding, or due diligence seeing as how Pattison already owns 51 per cet of the company. Canfor put out a standard release saying an independent board committee will review the offer. Canfor’s stock has shed almost half its value so far this year amid punishing forestry market conditions that have prompted a long list of curtailments.

Enough of the back and forth. Air Canada wants to seal the deal for Transat, announcing late yesterday it raised its bid to $18 per share from $13, which was enough to win the support of Letko Brosseau (Transat’s largest shareholder). Early this morning, we wondered if Mach would be forced to throw in the towel or make another move to obstruct Air Canada’s deal. Then, shortly before 9 a.m. ET, Transat said a Quebec regulator has effectively blocked Mach’s attempt to scoop up 19.5 per cent of Transat’s shares at $14 apiece.

IN CONVERSATION WITH MARK BRISTOW

BNN Bloomberg's Andrew Bell went around the world with Barrick’s president and chief executive bright and early this morning, less than an hour after Barrick posted quarterly results and indicated full-year production and costs are heading in the right direction (ie, at high end of range and low end, respectively). From Acacia; to gold at US$1,500; to the battle for market cap supremacy with Newmont Goldcorp; and more. If you missed any of it, check out the interview on BNNBloomberg.ca

-Saudi Aramco, which is reportedly planning to take another run at an initial public offering, today reported a 12 per cent drop in first-half profit while also announcing it’s buying 20 per cent of Reliance Industries’ energy unit in a move that looks like a play on refining.

-Incredible scenes out of Hong Kong today, where protestors at one point overwhelmed the international airport. We’re getting on-the-ground updates from our Bloomberg partners.

-Insolvency experts (and dear friends of The Real Economy) Hoyes Michalos have done the math on student debt, and it’s not pretty. According to their analysis, student debt factored into 17.6 per cent of Ontario insolvencies last year.

-And we have Jon Erlichman's report on the Canadian (who shares our host's name, by coincidence) who was enlisted by the Tampa Bay Rays as the baseball team's analytics coach.