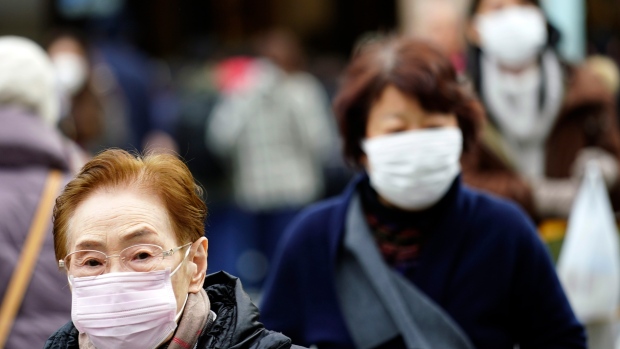 Pedestrians wear protective masks as they walk through a shopping district in Tokyo Thursday, Jan. 16, 2020. Japan's government said Thursday a man treated for pneumonia after returning from China has tested positive for the new coronavirus identified as a possible cause of an outbreak in the Chinese city of Wuhan. , AP Photo/Eugene Hoshiko

China’s efforts to contain the coronavirus are being called “unprecedented” by a health expert quoted by Bloomberg News, with an estimated 40 million people covered by a lockdown on the eve of Lunar New Year. There are now more than 800 confirmed cases of the respiratory illness in that country and at least 25 fatalities. We’ll keep tabs on developments and assess the implications for China’s economy and the rest of the world as Beijing clamps down on inbound and outbound travel (let’s not forget Canada has ramped up efforts to attract Chinese tourists the last couple of years, including declaring 2018 the Canada-China Year of Tourism).

There’s a number to satisfy virtually any argument in today’s retail sales data from Statistics Canada. The headline gain of 0.9 per cent looks impressive on the surface as it outpaced estimates and marked almost a full bounce back from October’s surprising 1.2 per cent per cent drop. But November’s headline growth was largely driven by vehicle purchases. The ex-autos growth was just 0.2 per cent and there was notable softness in categories like general merchandise, clothing and home furnishings. We’ll dissect the data this morning and consider how it fits with the concerns expressed by the Bank of Canada this week.

A spokesperson for the airline has confirmed that it “experienced a server issue affecting [its] network overnight that has now been fixed.” Look no further than Twitter to find dismay from travellers who were affected by the unspecified number of delays that were caused. It’s another setback for Air Canada’s customer relations after rampant frustration amid changes to the carrier’s reservation system.

-Aphria is on our radar today after the pot producer announced it lined up a $100-million investment from an unidentified institutional investor via units (including one common share and warrant to buy half a common share) priced at $7.12 apiece.

-Uber and Lyft are finally poised to begin operating in Vancouver after getting the go-ahead yesterday from British Columbia’s Passenger Transportation Board.

-Intel is shaping up as the stock to watch today after breezing past estimates in its fourth quarter (and in its forecasts) amid booming business with cloud customers.

-Brookfield is facing a rival bidder for Cincinnati Bell, which says it received an unsolicited US$12/share proposal from an unidentified infrastructure fund. The telco agreed to be acquired by Brookfield Infrastructure for US$10.50/share on Dec. 23.