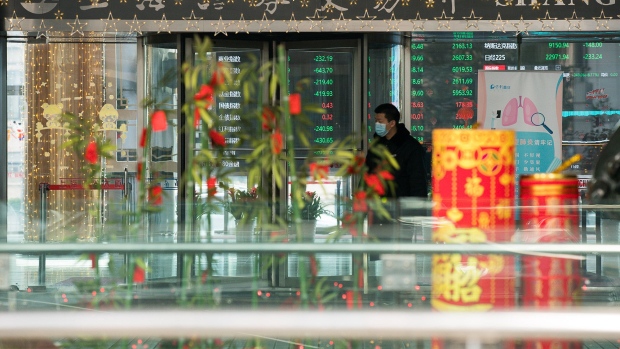 A security man wears a mask when standing in front of a stock monitor at Shanghai Stock Exchange Building on February 03, 2020 in Shanghai, China. , Photo by Yifan Ding/Getty Images

Stocks sank in China today in the first trading session since investors were sidelined by an extended Lunar New Year holiday due to the coronavirus outbreak. The Shenzen Composite Index tumbled 8.4 per cent and the Shanghai Composite fell 7.7 per cent. The People’s Bank of China stepped in with a 150-billion yuan (US$28B) cash injection for banks in its attempt to serve as a stabilizer. Meanwhile, our Bloomberg partners just reported Beijing is contemplating lowering China’s official growth forecast for this year. All this as the respiratory illness numbers ballooned over the weekend, with at least 362 dead and 17,390 confirmed cases. As for the implications here, the latest BNNBloomberg.ca poll resulted in a remarkably evenly-split snapshot as 34 per cent said the illness is not a significant threat to our economy, 31 per cent said it is, and 35 per cent said it’s not yet a significant threat.

The Canadian cinema operator confirmed its intent to proceed with the friendly takeover by Cineworld after concluding a seven-week go-shop period. In a release this morning, Cineplex said its advisor (Scotiabank) reached out to 52 potential buyers, three of whom signed confidentiality agreements. But none of them presented a superior proposal to the $34/share agreement with Cineworld which awaits all requisite approvals, including a shareholder vote on Feb. 11.

It’s time for BNN Bloomberg’s annual ramp-up in personal finance reporting geared toward helping you make the best decisions ahead of the RRSP contribution deadline. Throughout this month, watch for Pattie Lovett-Reid’s advice in The Open and expert insight from guests in The Real Economy. Today, we lay the groundwork with the basics of building a financial plan.

Plenty of catalysts on the calendar this week, most imminently with Alphabet earnings this afternoon. In Canada, Suncor and BCE (our parent) are on the earnings calendar. Friday brings jobs data on both sides of the border. And the political highlights include the Iowa caucuses tonight and tomorrow’s State of the Union address.

-For the marketing files: Canada Goose today announced Kate Upton is in the parka maker’s corner as a “Goose Person” (the company’s chose title for its brand ambassadors)

-Interesting announcement by BlackBerry on Twitter this morning: TCL Communication is going to discontinue sales and manufacturing of BlackBerry-branded smartphones later this year. We’re looking into what other options, if any, still exist for BlackBerrys to be built by third-party manufacturers.

-Torstar today said it will sell land and a building used by the Hamilton Spectator for $25.5 million. The deal is expected to close in the first quarter.

-Teck Resources today underscored its pledge to become a net-zero emitter by 2050 with a plan to boost use of renewable energy at the Quebrada Blanca Phase 2 (QB2) copper project in Chile.

-We await an official update from Cineplex on the outcome of its go-shop period. The cinema operator had until yesterday to drum up a superior proposal to the $34/share offer it accepted from Cineworld.

-WeWork has selected Brookfield Properties executive Sandeep Mathrani as its next CEO. Mathrani joined the Brookfield empire after its acquisition of GGP; now he’s tasked with continuing the embattled office-sharing company’s stabilization/turnaround.

-Bernard Ebbers died yesterday at the age of 78. The disgraced former CEO of WorldCom was released from prison last month on medical grounds after serving a little more than half of his 25-year sentence tied to the telecom firm’s accounting scandal.