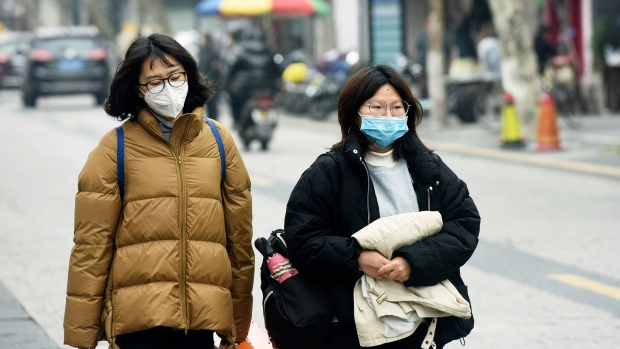 Women wear face masks as they walk down a street in Hangzhou in eastern China's Zhejiang province, Tuesday, Jan. 21, 2020. Face masks sold out and temperature checks at airports and train stations became the new norm as China strove Tuesday to control the outbreak of a new coronavirus that has reached four other countries and territories and threatens to spread further during the Lunar New Year travel rush. , Chinatopix via AP

The World Health Organization will hold an emergency meeting later today to reevaluate whether the coronavirus outbreak constitutes a public health emergency of international concern. China is now reporting at least 170 dead and 7,700 confirmed cases of the respiratory illness. Meanwhile, the list of companies warning on its impact is growing longer by the day and policymakers aren’t hiding from the threat posed to the global economy. Yesterday, U.S. Federal Reserve Chair Jerome Powell acknowledged “there is likely to be some disruption to activity in China and possibly globally.” We’ll keep an ear out for any commentary on the subject from outgoing Bank of England governor Mark Carney when he addresses reporters after presiding over his final rate decision (a hold).

Quite a lineup today on BNN Bloomberg. Ontario Premier Doug Ford joins Greg Bonnell on The Open for his first interview with us since taking office. We’re looking forward to exploring some hot-button issues like housing, cannabis and climate with him. Amanda Lang is on location at a summit hosted by the Chamber of Commerce where she’ll speak with some leaders of industry and geopolitical experts. We’re particularly looking forward to her interview with Suncor CEO Mark Little. And if all goes according to plan, Tara Weber should catch up with Cenovus CEO Alex Pourbaix this afternoon in Calgary. If you miss any of them, they’ll be available on BNNBloomberg.ca

Lots of movers to keep track of after yesterday’s after-hours earnings barrage. Facebook shares are coming under pressure after a 25 per cent surge in revenue failed to satisfy investors (perhaps due to costs and expenses growing at an even faster rate). Tesla shares are soaring after the vehicle maker delivered a second consecutive profitable quarter and said the production timeline for its Model Y crossover is ahead of schedule. And Microsoft is inching higher in the pre-market as the tech giant’s cloud-based boon continued in the latest quarter with total profit far exceeding estimates.

-Calgary-based cannabis producer Sundial Growers is cleaning house. CEO: out. Executive chairman: resigned from role (but sticking around as director). COO: out. Director Zach George is stepping in as CEO. The company also announced “streamlining and efficiency initiatives” intended to save up to US$15 million this year. The stock is down more than 20 per cent pre-market.

-To wrap up this year’s coverage of Bell Let’s Talk day, the company (BNN Bloomberg's parent) announced this morning a record level of activity yesterday, resulting in a $7.7-million commitment by Bell to various mental health initiatives.

-Altria is booking a US$4.1-billion impairment charge on its investment in Juul, citing anticipated legal costs relating to the vaping business.