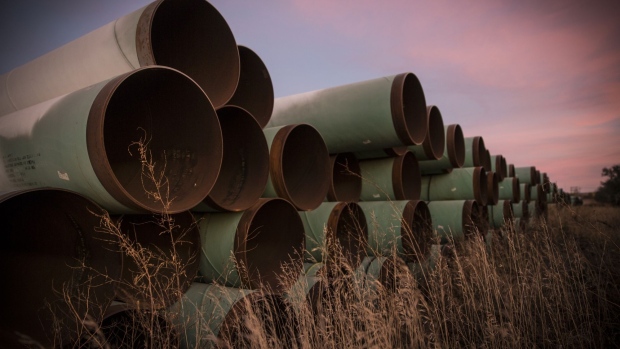 Alberta Premier Jason Kenney blasted U.S. President Joe Biden late yesterday for yanking Keystone XL’s permit, called out the Trudeau government and its top envoy in Washington for not putting up more of a fight to save the pipeline, and suggested that Enbridge’s Line 3 and Line 5 pipelines could be at risk if the federal government throws in the towel on defending KXL.

So what comes next? Kenney wants Prime Minister Justin Trudeau to request a meeting with the administration. Lucky for him, the new White House Press Secretary confirmed Biden will make Trudeau his first phone call to a foreign leader tomorrow. Depending on how that discussion goes, I guess we’ll see how hard Kenney wants to push the idea of Trudeau imposing retaliatory sanctions. Bloomberg Markets will get views on that when Amanda speaks with policy expert Jack Mintz at 2:30 p.m.

U.S. futures are pointing to a slim extension of the gains that pushed the S&P 500 to a record close yesterday and left the S&P/TSX Composite Index 28 points shy of a new all-time high. Optimism about ramped-up fiscal spending remains in focus as Janet Yellen awaits her formal confirmation as U.S. treasury secretary. If you missed it, might want to check out Amanda’s discussion with David Rosenberg, in which he mapped out what he thinks could upset the apple cart for investors:

The Canadian Federation for Independent Business put new numbers on the state of play for its constituents today. And it's ugly. According to CFIB, 181,000 small business owners are considering pulling the plug on their operations -- which the federation warns would put 2.4 million jobs at risk.

737 MAX BACK IN CANADIAN SKIES

WestJet flight WS115 is scheduled to depart Calgary for Vancouver at 7:50 a.m. MT today in this country’s first commercial 737 MAX service since Boeing’s troubled jet program was grounded in March 2019. We’ll have pictures courtesy of our CTV News colleagues in Vancouver and will gather perspective on travelers’ comfort with the Max and the stakes for Canada’s top airlines.

Canada Mortgage and Housing Corporation disclosed its ability to withstand the fallout from some high-octane shocks. But unlike past years, when the crown corporation tested for unimaginable situations, this time it ran a more realistic exercise based on potential COVID outcomes. The good news is that it could withstand the most severe W-shaped recovery scenarios so long as there's some government assistance. And that's true even when CMHC layers on a cyberattack. The only case where the agency would have to recapitalize itself is a W-shaped economic pattern where the feds don't step in, which seems hard to fathom. But I guess that's the point of this exercise.

- Bitcoin is extending its slide from the record high that was set earlier this month; it’s been down as much as 9 per cent this morning, adding to yesterday’s 4 per cent dip.

- Dream Industrial REIT will be on our radar today after it announced $468 million in deal activity late yesterday. It’s a mix of assets that have already been acquired or in the process of being purchased. Dream is raising $225 million in a unit sale to help finance the spree.

- Today is the one-year anniversary of the U.S. Centers for Disease Control and Prevention confirming America’s first case of the novel coronavirus.

- We're also having deal activity in the mining sector. Eldorado Gold has agreed to take full ownership of QMX Gold in a $132-million cash-and-stock deal.