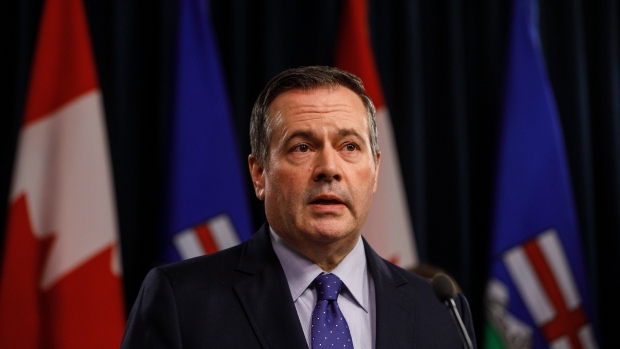 Alberta Premier Jason Kenney gave us the distinct impression late yesterday that after this year’s global crash in oil prices, Keystone XL could very well have suffered the same fate as Energy East if not for his government’s decision to invest directly in the project and provide a financial backstop. “The truth is this: Keystone XL would not be built if we did not step up to the plate,” he told BNN Bloomberg, adding OPEC and Russia are “trying to drive us out of business...we can’t leave our industry to sink or swim by itself.” And on that note, he said he’s in daily contact with the federal government about an emergency aid package, which he said needs to be “north of $20 billion”. We’ll chase voices from the energy sector to find out what they need from the feds, and which projects could be at risk if governments don’t step up.

To quote our Bloomberg TV partner Alix Steel: “Terrible employment numbers, just bad, bad, bad.” Indeed, the U.S. economy shed 701,000 jobs last month. Far worse than the average estimate of 100,000. And the unemployment rate rose to 4.4 per cent from 3.5 per cent. We’ll have plenty of analysis throughout the day.

West Texas Intermediate oil was extending gains in early trading (modestly so, up 2.5 per cent last time I looked) after yesterday’s record intraday surge thanks to U.S. President Donald Trump’s “expectation and hope” that the Saudis and Russia will cut production. The POTUS is meeting with top energy sector executives at the White House this afternoon, with some reports this week that tariffs on Saudi oil could be on the table. Meanwhile, our Bloomberg News partners are reporting OPEC+ is aiming to hold a virtual meeting Monday and plans to invite other nations to join the talks aimed at putting a floor under prices.

Toronto’s housing market got off to a scorching start last month, with data released today showing sales surged 49 per cent in the first half of March. No surprise though that activity trailed off as measures to contain the pandemic took hold. All told, home sales rose 12.3 per cent year-over-year and the average selling price climbed almost 15 per cent to $902,680.

We’ve got Jeremy Rudin, Canada’s top banking regulator, shortly after 1 p.m. ET to discuss the Office of the Superintendent of Financial Institutions’ moves to keep credit flowing and ensure the country’s banks stay on solid footing at this time of crisis. Toronto Mayor John Tory, who yesterday was visibly exasperated with residents flouting social distancing instructions, will also join us that hour to talk about locking down Canada’s largest city (and keep in mind Ontario Premier Doug Ford says the province will today release models of the number of deaths that could be caused by the virus). Conservative Party of Canada outgoing leader Andrew Scheer is booked for 1:45 p.m. ET to share his perspective on the cost of containing the pandemic and Canada’s fiscal outlook. Neil Parmenter, head of the Canadian Bankers Association – which this morning said almost half a million mortgage-payment deferral requests have already been made, is scheduled to speak with us at 3 p.m. ET. And before all of that, former chair of Canada Mortgage and Housing Corporation, and ex-Bank of New York Mellon CEO, Bob Kelly catches up with Jon Erlichman at 11 a.m. ET.

--3M incurred Donald Trump’s Twitter wrath, with the president writing last night that the administration “hit 3M hard [yesterday] after seeing what they were doing with their Masks…will have a big price to pay!” No additional clarity as to what Trump was referencing. However, this morning 3M put out a release saying the U.S. administration, among other things, asked it to stop exporting U.S.-made respirators to Canada and Latin America, which the company says would carry “significant humanitarian implications.” 3M also said its staff “have gone above and beyond” to churn out N95s and it’s cracking down on “unethical and illegal” price gouging.

-Canadian Tire says it’s deferring some of this year’s planned capital spending, halting share buybacks, and “leveraging well-established and solid relationships with Canadians banks and our high standing in capital markets” to line up liquidity if necessary.

-Magna International saluted the federal government's efforts to contain the economic fallout from COVID-19 when he spoke with Amanda Lang yesterday afternoon, while cautioning that governments "can't spend money unwisely.” Similar to Finance Minister Bill Morneau on our station earlier this week, he said "there's other things to worry about right now" than budget deficits.

-Lululemon says it’s extending pay protection for its employees until June 1 while its senior management will see their base salaries cut 20 per cent.