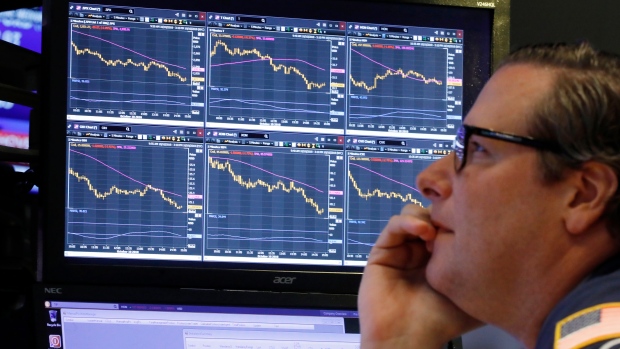 In this Oct. 10, 2018, file photo specialist Gregg Maloney works at his post on the floor of the New York Stock Exchange. , AP Photo/Richard Drew, File

Futures are pointing to higher open at the start of trading in New York following yesterday’s indiscriminate selling that sent North American markets to their worst day since March after the Fed’s reality check and fear that another wave of COVID-19 has become reality in pockets of the United States. It was a sell-everything type of day with just five stocks on the TSX Composite Index closing higher. How should the average investor make sense of these markets? We have plenty of insight lined up throughout the day.

The pandemic isn’t over, but the wage sweetener that Loblaw had been paying its front-line workers is. Chairman and CEO Galen G. Weston announced the decision yesterday in one of his regular updates to customers. “I continue to be a strong believer in a progressive minimum wage and would support any government-led effort to establish a living wage,” he stated. To be fair, Loblaw isn’t alone: rival Metro has confirmed that its top-up will end tomorrow (albeit with an additional $200 lump sum payment for full-time workers, and $100 for part-timers). All of this is raising important questions about balancing the pursuit of profit against social interest.

IN CONVERSATION WITH GENE MCBURNEY

Imagine a legendary New York Yankee signing with the Mets. That’s sort of what it looked like to me when Canaccord Genuity announced it had hired GMP co-founder Gene McBurney to lead its investment banking operations in Latin America and the Caribbean. The move came just a few days after McBurney retired from GMP’s board; and the GMP name wasn’t even mentioned in Canaccord’s announcement. We’re speaking with the Bay Street legend about his move at 10:30 a.m. ET.

Ed Sims is adding his voice to an open letter to the prime minister and premiers from dozens of Canadian travel and tourism organizations. "Many of the travel restrictions currently in place are simply too broad or unnecessary," the letter reads, "...We also need a more targeted approach to international travel." We'll chase some of the signatories and hunt for any indication of whether the federal and provincial governments are prepared to heed the leaders' call to action.

-Lululemon shares are slipping in pre-market trading after the company reported a 17 per cent drop in revenue in the three months ending May 3 as COVID-19 virtually wiped out in-store activity. On the digital side, Lulu's direct-to-consumer revenue soared 68% and accounted for more than half of total sales.

-Guyana Goldfields has identified China’s Zijin Mining as the successful bidder whose $1.85/share offer elbowed Silvercorp Metals out of the way. The friendly takeover arrangement is worth $323 million.

-Evidently being insolvent is no obstacle to raising cash. Hertz Global Holdings is seeking court permission to raise up to US$1 billion in a share sale that seeks to cash in on HTZ’s logic-defying rally.

-New data show the United Kingdom’s economy shrank 20.4 per cent in April, in a potential preview of what’s to come as countries report GDP for the darkest period (so far) in the pandemic.

-Most regions in Ontario enter stage two of reopening economy