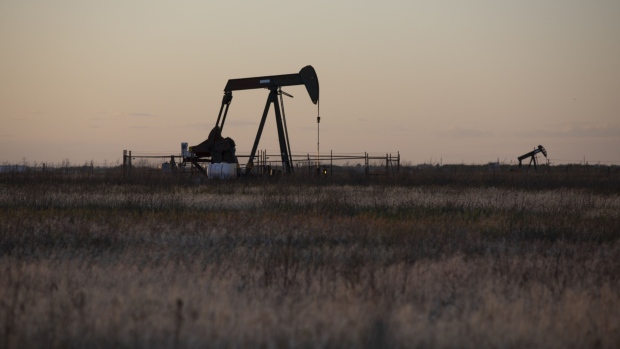 Active pump jacks stand in Midland, Texas, U.S, on Thursday, April 23, 2020. The price for the U.S. benchmark for crude oil, West Texas Intermediate, dropped below zero for the first time in history this month amid a global oil glut. Bloomberg/Matthew Busch

West Texas Intermediate crude is into a sixth straight day of gains this morning, making oil’s plunge into negative territory on April 20 look even more like a blip on the radar in a longer-term view of the commodity’s performance. After yesterday’s sharp declines in total U.S. crude inventories, and a record plunge in stockpiles at the key Cushing storage hub, are we witnessing a re-balancing of the market? And what about the risks if (when?) a second wave of COVID-19 hits? We’ll address the outlook.

With less than a week to go until the most anticipated round of bank earnings in years, TransUnion has released a timely outlook for Canadians’ ability to keep up with their obligations. The credit-data agency expects the national non-mortgage delinquency rate will rise as high as 6.9 per cent in the third quarter, compared to the pre-pandemic rate of 5.6 per cent in the fourth quarter of last year. As for mortgages, the delinquency rate is seen tripling to 0.9 per cent at the end of this year.

Aurora Cannabis is expanding into the United States CBD market, announcing late yesterday it’s buying Reliva LLC for US$40 million in stock, plus up to another US$45 million in cash or stock depending on performance. As David George-Cosh pointed out in his assessment of the deal on BNNBloomberg.ca, the U.S. is awash in CBD. Nonetheless, Aurora said the deal fits with its target of becoming profitable (from an adjusted EBITDA standpoint) in the fiscal first quarter of 2021. At one point, I saw Aurora’s NYSE-listed shares up almost 30 per cent in after-hours trading yesterday.

No doubt aviation is at, or near, the top of the list of industries that’ve been hardest hit by COVID-19. But even there, we’re not seeing an immediate stampede to apply for the federal government’s aid program for Canada’s largest employers. A spokesperson for WestJet said the airline is reviewing the Large Employer Emergency Financing Facility’s details to determine its next steps, while stating the company’s financial welfare has been “dramatically impacted” by COVID-19. And a spokesperson for Bombardier told us yesterday, shortly after the government unveiled new strings attached to LEEFF (including the requirement for public companies to provide the feds with common share warrants or cash equivalents), that it’s too early to say whether the company will apply. We’ll speak with governance expert Richard Leblanc today about how palatable LEEFF’s conditions will be for boards of directors.

Bruce Heyman, the former U.S. Ambassador to Canada who previously built his reputation at Goldman Sachs, didn’t beat around the bush in his assessment of the economy when he joined BNN Bloomberg yesterday afternoon. “Let’s just be blunt. We are in a depression,” he said while pointing to “depression-esque” unemployment and GDP numbers in the United States. See the full interview here.

-Canada Goose is laying off 125 employees, representing approximately two per cent of its global workforce. The parka maker said in a statement it was a “difficult, but responsible, decision” as it contends with the impact of COVID-19.

-Canfor is closing its Isle Pierre sawmill in Prince George, B.C., with CEO Don Kayne blaming the decision on “the ongoing economic devastation” caused by the pandemic.