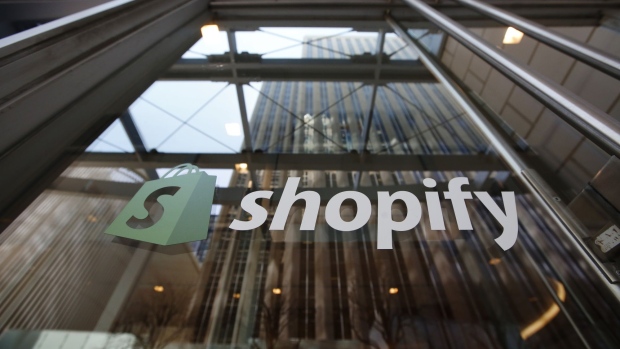 Signage is displayed on the Shopify Inc. headquarters in Ottawa, Ontario, Canada, on Thursday, May 7, 2020. , David Kawai/Bloomberg

We’ve been wondering if Shopify’s second-quarter results would be able to justify the meteoric rise in the Canadian tech darling’s valuation. The early verdict is yes. SHOP shares jumped in pre-market trading after the company posted second-quarter revenue and adjusted profit that steamrolled expectations (should point out Shopify also managed to swing to a net profit). The company said new-store creation soared 71 per cent sequentially; if there’s a fly in the ointment, Shopify stated the conversion rate to paying subscribers has been “slightly lower” than pre-pandemic levels. We’ll go through the details and ask investment professionals for their views on the stock that’s already soared 154 per cent this year and left Royal Bank of Canada in its dust.

The biggest names in technology will address U.S. lawmakers today. Amazon’s Jeff Bezos, Apple’s Tim Cook, Google’s Sundar Pichai and Facebook’s Mark Zuckerberg are the star attractions for the U.S. House Judiciary Antitrust Subcommittee’s hearing on “Online Platforms and Market Power” where the question of whether they’ve become too big for Americans’ own good will be debated. We’ll monitor developments and gather insight on how much the titans should fear more intense regulatory and political scrutiny.

Canada’s largest city has been given the go-ahead to enter the third stage in reopening its economy. Toronto will take that next step as of this Friday. We’re chasing reaction. Here's a handy reminder of what Stage 3 currently entails, including the 50-person cap on indoor gatherings.

Global stocks and U.S. futures are largely in a holding pattern ahead of today’s U.S. Federal Reserve decision and Chair Jerome Powell’s news conference, where the only real question seems to be how dovish the central bank will be. Recall that at the time of the last meeting, the Fed’s voting members showed no intent of touching rates until at least 2022. After today there is just one more scheduled policy decision ahead of the U.S. elections in November.

-Starbucks shares are rising in pre-market trading after the coffeehouse chain's 40 per cent (!) plunge in fiscal third-quarter same-store sales wasn't quite as terrible as analysts anticipated, thanks to a surge in the average ticket price. The company also nudged up its full-year profit forecast.

-RioCan says the cash collection of rents owed in the second quarter was 73.3 per cent, while total collection for amounts owed this month stands at 85 per cent. The big REIT also swung to a net loss, in part because of writedowns in the quarter. We'll dig into how RioCan is dealing with COVID when CEO Ed Sonshine joins us this afternoon.

-Enbridge has reaffirmed its outlook after posting second-quarter profit that was in line with estimates. CEO Al Monaco says there will be no need to tap capital markets through 2021 thanks to the pipeline giant's current liquidity.

-Montreal-based IPL Plastics has agreed to be acquired by Madison Dearborn Partners for $10.00 per share. Including debt, this deal is worth $981 million.

-AMD shares are up more than 10 per cent in early trading after the chipmaker raised its full-year revenue forecast thanks to demand for its PC, gaming and data center products. Its second-quarter revenue surged 26 per cent and profit exceeded expectations.

-Bird Construction is buying Stuart Olson in a $96.5-million cash-and-stock deal that marks the culmination of the latter’s strategic review process that was launched in April. In a release, Stuart Olson’s CEO referred to unspecified “significant economic changes in Canada” as contributing to its motivation to find a buyer.

-We'll watch Choice Properties REIT today after the company announced it's buying a pair of properties in Toronto for $206 million, to be paid in CHP units.

-Cameco is planning to resume operations at its Cigar Lake mine in Saskatchewan in early September while pointing to "commercial considerations" that it will have to balance against health and safety. The mine was shut down in March as COVID-19 took hold; Cameco say it will not be able to recoup lost production. Cameco's quarterly loss more than doubled even as revenue jumped 35 per cent.