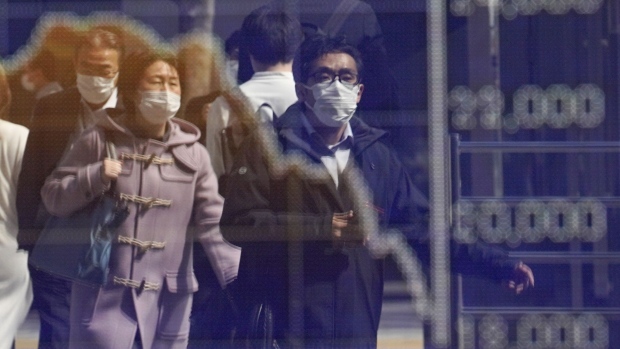 Pedestrians wearing face masks are reflected in a monitor displaying the Nikkei 225 stock information outside a securities firm on March 13, 2020 in Tokyo, Japan. , Bloomberg News

Volatility is back. Global stocks and U.S. futures had been posting across-the board gains, until everything turned south before 7 a.m. ET. It’s a reminder of how quickly the pendulum is swinging these days, and comes after the S&P/TSX composite index registered its biggest single-day surge on record yesterday.

Before the mood soured this morning, it seemed like stocks were being lifted by relief about the international stimulus effort that’s designed to cushion the economic hit from COVID-19. Late last night, U.S. Senate Majority Mitch McConnell said a deal had been reached on the Americans’ ~US$2-trillion package; notably, for our purposes, the agreement includes curbs on share buybacks for any company accepting aid. Meanwhile, Canada’s emergency legislation is heading to the Senate after it was approved in the House of Commons shortly before 6 a.m. ET.

We’ll get early insight from Bay Street on how investors should handle these abrupt market swings, when John Zechner joins Jon Erlichman at 9:20 a.m.  ET. And we’re looking forward to speaking with the head of the OECD, Angel Gurria, at 1 p.m. ET about the fiscal and monetary campaign to protect the economy.

The Canadian Federation of Independent Business’s latest index shows confidence plummeted 19 points to just 30.8 last month, reaching an all-time low. “March 2020 has turned out to be a month like no other in Canada’s economic history,” according to CFIB chief-economist Ted Mallett. The underlying details are equally distressing, with 50 per cent of respondents saying they’re planning layoffs in the next three months. When we spoke with Mallett yesterday, he said the CFIB is fielding lots of questions about potential rent relief and measures to ensure skilled workers can be brought back when the economy stabilizes. We’ll explore those themes.

A couple of things are abundantly clear. 1) A lot of Canadians are being thrown out of work by the outbreak. Look no further than the CFIB data and our Bloomberg partners’ scoop yesterday on the nearly-1 million applicants for jobless claims last week alone. 2) There’s incredible demand for information about resources, and recourse, for those who are laid off. Look no further than the spectacular interest in this Q&A produced by BNN Bloomberg’s Michelle Zadikian for our website. All this to say, we’re going to ramp up bookings of guests who can guide Canadians on managing this tumultuous time in the labour market.

Shaw Communications announced the death of its founder, JR Shaw, yesterday at the age of 85. In a sign of how revered he was and will continue to be, check out the outpouring of respect from the likes of Alberta Premier Jason Kenney and industry peers, including BCE CEO Mirko Bibic, who hailed JR as an “inspirational entrepreneur.” JR Shaw built his company from the ground up, with its subscriber base exceeding 7 million as of the end of November. CEO Brad Shaw will inherit the role of executive chair, which JR had held, on an interim basis.

-Leon’s Furniture also announced a significant round of temporary layoffs today, with 3,900 staff members affected by the announcement. That’s half the company’s headcount. The decision is being made as a result of Leon’s closing 72 of 205 stores for the time being.

-Transcontinental today said it's been forced to temporarily lay off 1,600 workers as a result of non-essential shutdowns in Ontario and Quebec. Separately, the company said its food packaging business is "running at high capacity."

-Target today said its same-store sales have surged more than 20 per cent so far in March, with comparable sales for food and other essentials up 50 per cent. The retailer is however pulling its forecasts as a result of "an unusually wide range of potential outcomes".

-Agnico-Eagle is placing its Quebec mines in care and maintenance mode as a result of government orders in the province, prompting the company to withdraw its 2020 production and cash cost forecasts. Agnico also disclosed it tapped US$1 billion from its credit facility, while noting it “has no current plans to use the funds.” Yamana Gold, which co-owns the Canadian Malartic mine in Quebec with Agnico, also abandoned its production and cost outlooks.  (NOTE: Rob to chase Sean Boyd and Peter Marrone)

-Nike says its sales in China slumped four per cent in the latest quarter, which ended Feb. 29. That came alongside a 36 per cent surge in overall online sales. On a conference call with analysts, CEO John Donahoe said his company is exploring designs for personal protective equipment (PPE) to help fill the global demand.