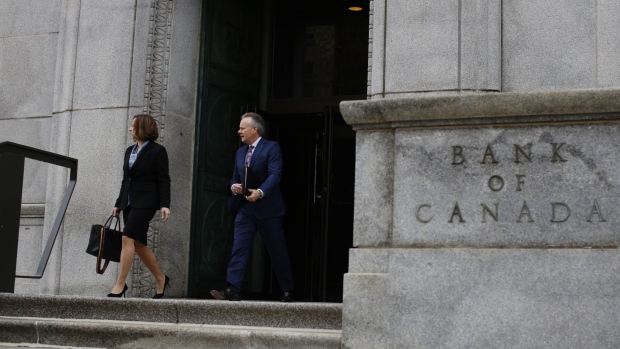 Stephen Poloz, governor of the Bank of Canada, right, and Carolyn Wilkins, senior deputy governor at the Bank of Canada, leave the Bank of Canada building on their way to a press conference at the National Press Theatre in Ottawa, Ontario, Canada, on Wednesday, April 24, 2019. A persistently sluggish global economy and a bleak outlook for the energy sector mean that interest rates won't need to rise as much as the Bank of Canada once thought, even if all economic headwinds eventually dissipate. Photographer: David Kawai/Bloomberg , Bloomberg

Tiff Macklem is the next governor of the Bank of Canada. What a story. He’s the former senior deputy governor who was passed over for the top job and subsequently left the central bank to lead the University of Toronto’s Rotman School of Management. Now he’s back. So many questions to address today. Chiefly: why is he the right person for the job at this time of turmoil? Also, what does the future hold for current Senior Deputy Governor, Carolyn WIlkins? We have in-depth coverage throughout the day.

Amazon.com’s first-quarter revenue surged 26 per cent. Apple raised its dividend and added US$50 billion to its share buyback plan after trouncing fiscal second-quarter profit and revenue estimates. Yet shares in both tech giants are coming under pressure, and dragging down markets in the process, thanks to murky outlooks. In the case of Amazon, CEO Jeff Bezos advised investors to “take a seat” -- putting them on notice that the US$4 billion or so in operating profit that the ecommerce giant would normally be on course to produce in the second quarter is instead going to finance COVID-related expenses. Meanwhile, the iPhone maker declined to provide financial forecasts for this quarter as COVID-19 clouds its outlook. Why is this sort of caution causing so much distress whereas investors on Wednesday essentially shrugged off the Fed’s ominous language about the pandemic’s impact? We’ll keep probing market psychology.

AIMCo CEO OWNS UP TO LOSSES

Kevin Uebelein opened up late yesterday on Alberta Investment Management Corp’s ill-fated investment strategy that made headline a few weeks ago. “As CEO of AIMCo, I am accountable for the performance of our organization. I am also responsible for setting the record straight,” he said, in a nod to The Globe and Mail’s earlier reports that losses tallied $4 billion. Uebelein said the total losses to date actually amount to $2.1 billion, and that the culprit volatility-related strategy is still being wound down.

We’ll stay on the lookout for any commentary today as tenants face another month of payments while uncertainty hangs over the effectiveness of the federal government’s relief program. If you missed it, check out our interview from late yesterday with Dream Industrial REIT CEO Michael Cooper, who said he’s planning for “tough, tough times ahead” and that he doesn’t want to be “part of any company going broke.” He also said he’s prepared for a “new normal” to only emerge in 2022. Check it out here: https://www.bnnbloomberg.ca/video/we-re-planning-for-tough-times-dream-reit-ceo~1950146

-Tim Hortons is indisputably in a rough patch. The chain’s same-store sales sank 10.3 per cent in the first quarter, according to Restaurant Brands International, whose Popeyes Louisiana Kitchen business was a bright spot for the fast-food conglomerate, as its same-store sales surged 26.2 per cent in the period. We’ll walk through the quarter this afternoon with RBI’s chief corporate officer.

-Among the notable energy earnings today: Exxon Mobil swung to a US$610-million net loss thanks to US$2.9-billion in writedowns. It's also slashing capex for this year by 30 per cent. And Imperial Oil, swung to a $188-million loss thanks largely to $301 million in charges; nonetheless, it's maintaining its quarterly dividend at 22 cents per share.

-Alberta unveiled its strategy for reopening the provincial economy late yesterday, including allowing retailers to gradually resume operations as early as May 14. The government made it clear it’ll be monitoring the percentage of tests that are positive as well as hospitalization and intensive care unit rates as it decides when to move through the three stages of relaunch. Details here.

-Fairfax Financial’s first quarter loss came in a bit lighter than previously telegraphed, at US$1.26 billion. The main cause: $1.08 billion in losses on its long equity exposure.

-Open Text disclosed late yesterday it's expecting up to $100 million in restructuring costs. A spokesperson for the company later confirmed to BNN Bloomberg that up to five per cent of the company’s workforce will be cut. That overhaul was announced alongside a 13 per cent gain in third-quarter revenue and a slight decline in adjusted profit. We'll get more details when Jon Erlichman speaks with CEO Mark Barrenechea this morning.

-Stelco Holdings announced a deal with U.S. Steel late yesterday for a long-term supply of iron ore pellets; it also acquired an option to buy a 25 per cent stake in the Minntac iron ore mine and associated infrastructure. On top of that, Stelco also said it was 100 per cent sold out in the first quarter and its order book is already 85 per cent filled for this quarter.