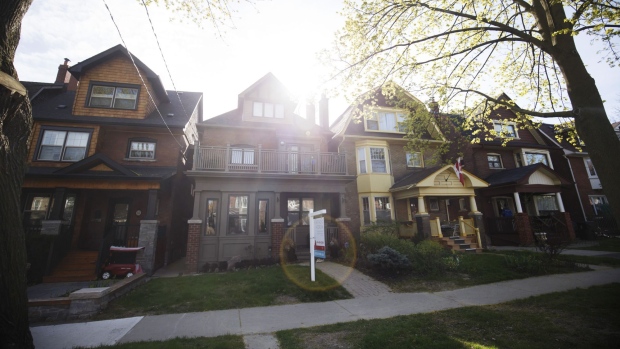 A real estate sign is displayed on the front lawn of a house in Toronto, Ontario, Canada. Bloomberg/Cole Burston , Bloomberg

Toronto’s housing market activity fell off a cliff last month as COVID-19 lockdown measures pushed buyers and sellers to the sidelines. The Toronto Regional Real Estate Board says sales fell 67 per cent year-over-year in the month, while active listings tumbled 41 per cent. The average selling price was flat compared to April 2019, but was down about nine per cent from March at $821,392. It’s a similar story as what we saw out of Vancouver yesterday, where home sales fell sharply. We’ll delve into buyer and seller psychology this morning with one of our go-to real estate industry experts, John Pasalis.

Pershing Square Capital Management and Restaurant Brands International had nothing but praise for each other despite the New York-based hedge fund helmed by Bill Ackman disclosing a greater stake in the fast-food conglomerate in a filing that’s typically associated with the onset of activism. A spokesperson for Pershing Square told us last night “we’re big believers in the company and its management”, and RBI’s chief corporate officer said his company has “always valued [Pershing’s] confidence”. Even so, the filing lists a long range of issues that Ackman and Pershing might seek to discuss with RBI and other stakeholders. We’ll assess what other shareholders might hope will be at the top of that agenda.

OIL ON A HOT STREAK

The West Texas Intermediate crude contract for June delivery is into a fifth straight day of gains that’s lifted the commodity more than 80 per cent. Meanwhile, Western Canadian Select oil has closed higher in four consecutive sessions for a total gain of 225 per cent. OPEC+ curtailments and output cuts announced by some the industry’s biggest names have helped propel prices; and yesterday’s news from Enbridge about offering to store oil in a pipeline segment that’s destined for decommissioning likely contributed to WCS’s rise yesterday.

-Sleep Country Canada has suspended its dividend and buybacks as it reports a 27 per cent plunge in adjusted first-quarter profit. In its release, the mattress retailer said same-store sales had been up 13 per cent year-to-date as of February, before sales plummeted in March as COVID-19 and lockdown measures took hold.

-SNC-Lavalin announced today its chairman, Kevin Lynch, is planning to step down this year.

-Heroux-Devtek said this morning it will cut its workforce by 10 per cent, representing approximately 225 employees.

-CT REIT late yesterday said it has collected 96.5 per cent of the rent that was due May 1; it also reported a 5.4 per cent gain in first-quarter funds from operations.

-L Brands is a stock to watch today after it disclosed a friendly agreement with Sycamore Partners to terminate the private equity firm's planned acquisition of a 55 per cent stake in Victoria's Secret, which L Brands said is now being groomed for a spinoff.

-Shares of Hertz Global Holdings pared pre-market losses after disclosing it reached an agreement with some of its lenders that will give it more time to continue discussions with other stakeholders about its future. Shares of the car-rental company had earlier been down more than 25 per cent amid reports it could be on the brink of filing for Chapter 11 bankruptcy protection.

-Thomson Reuters trimmed its full-year revenue growth outlook this morning to a range of 1-2 per cent from the previous call for 4.5-5.5 per cent. The company also reported a 36 per cent gain in first-quarter adjusted profit.

-Total SA shares have been rallying in Europe after the energy supermajor (which has a stake in the Fort Hills oil sands mine) maintained its dividend despite a 35 per cent drop in adjusted first-quarter profit.

-Ending with an observation: shares of Shopify have more than doubled since their COVID-19 trough on March 16. Makes you wonder what it’ll take to keep investors satisfied when the tech darling reports earnings tomorrow morning.