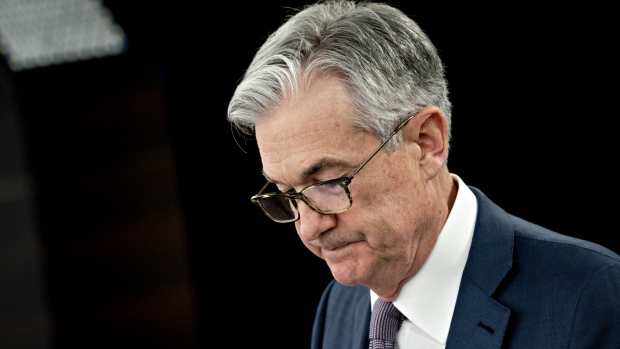 Do budget deficits matter at times of crisis? That’s a question we’ll address early today with former Parliamentary Budget Officer Kevin Page. Great timing, with the Ontario government having just unveiled a $17-billion strategy for managing COVID-19 (thus propelling the deficit forecast for this fiscal year to $20.5-billion), and after the Federal government’s revised action plan, including the Canada Emergency Benefit Response, tallied $52 billion in direct assistance programs (plus $55 billion in tax deferments).  After we hear from the former PBO, we’re looking forward to speaking with Ontario Finance Minister Rod Phillips at 9:45 a.m. ET.

Back to the feds’ plan for one moment: we’re mindful of significant interest in the CERB $2,000/monthly income top-up. As CTV News Chief Financial Commentator Pattie Lovett-Reid told me this morning, the CERB “is a start, but is it enough?” Stay tuned for her insight.

U.S. Federal Reserve Chair Jerome Powell was on NBC’s Today Show this morning. Among the key takeaways: he acknowledged the U.S. “may well be in a recession” now and that “we don’t know” what the economic recovery on the other side of the health crisis will look like (though he repeatedly stated his belief that confidence will bounce back). He also declared that his central will not run out of “ammunition.” This is a good opportunity to point out a record 3.3 million initial jobless claims were filed in the U.S. last week, according to data released this morning.

The S&P/TSX composite index is coming off its first back-to-back gains since it climbed to a record on Feb. 20 and has rallied 17 per cent over the last two sessions. Amazingly, only one index member (Waste Connections) is underwater over that two-day stretch, and the leaders board includes some stunning gains, led by Chorus Aviation’s 66.8 per cent surge. Even so, perspective is everything: the TSX enters today down 26.8 per cent from last month’s all-time high.

Almost every major overseas index is trading lower as of the time of this writing, and U.S. futures are pointing to a weak open, as the enthusiasm about global stimulus efforts wanes while the Americans’ US$2-trillion package heads to the House of Representatives after it cleared the Senate overnight. Our Bloomberg partners are reporting the House is likely to vote tomorrow. We will be on the lookout for any commentary from today’s G20 summit that could reignite optimism.

The Canadian private equity giant isn’t hiding from the fact it will take some hits from the crisis, but its founder and CEO also wants shareholders to know that it’s well-equipped to manage the turmoil. And it’s also ready to pounce. “Our ability to maintain our dividends, to survive a crisis and to seize opportunities is not in question,” wrote Gerry Schwartz in a letter released late yesterday, in which he underscored the value of having plenty of cash in times like this and hence “never (being) a forced seller.”

-Norbord is taking out a quarter of its North American operating capacity, while saying it’s aiming to “preserve jobs for as many employees as possible”. It’s also reducing this year’s capital budget by 25 per cent. Meanwhile, West Fraser Timber also announced additional curtailments last night.

-The Green Organic Dutchman is pointing to the virus outbreak as one of the reasons for a slew of cost-saving measures announced last night. Among them: Temporary pay cuts for salaried employees and “certain” executives, and a postponed opening of its greenhouse in Valleyfield, QC – resulting in layoffs for the majority of staff working at that facility.