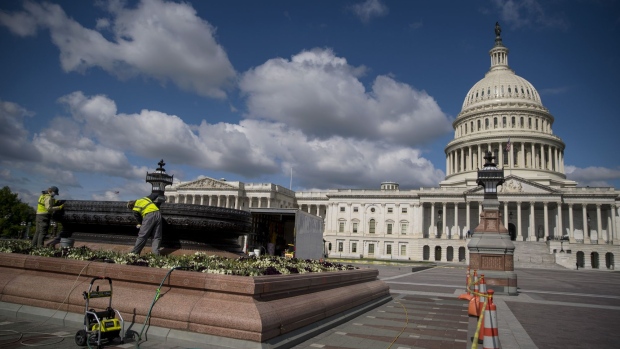 Workers clean outside of the U.S. Capitol in Washington, D.C., U.S., on Tuesday, May 12, 2020. Lawmakers continue negotiations over the next round of coronavirus stimulus legislation, with a Senate Democrat saying today that a handful of Republicans could be on board with a proposal to send $500 billion in funding to states. Photographer: Eric Thayer/Bloomberg , Bloomberg

(Bloomberg) -- The spread of the Covid-19 pandemic last year triggered an about-face among governments around the world regarding fiscal policies. Rather than tightening belts to reduce deficits and debt, nations are engaging in aggressive spending to help prop up economies devastated by efforts to contain the virus.

Marko Papic, partner and strategist at hedge-fund seeder Clocktower Group, joined the “What Goes Up” podcast to discuss what it all means for the current economic cycle and financial markets. Some lightly edited highlights of the conversation are below.

On austerity’s role in the last cycle:

“When I look at what happened in the last expansion, I sort of try to figure out why was it prolonged and tepid, why was it all about secular stagnation? I call it the ‘Charlie Brown expansion,’ because it was always kind of depressed. So why? A lot of people give you a lot of really complicated answers. Like, oh, ‘people are getting old’ -- demographics -- or ‘technology is deflationary.’ OK, maybe.”

“To me it was very simple: Politics flipped in 2010 and we got this huge push toward austerity. Not just in the U.S. with the Tea Party but even with David Cameron; in Europe, Angela Merkel of course. Everywhere. Only really in 2012 could you say that Abenomics kind of moved a little bit against it. But there was this big political consensus that we had to tighten our belts because, well, households did. So governments had to do the same. And I think that was a huge component of prolonging the recovery, making it tepid and ensuring that the output gap could continue to be basically open and not closed.”

How it’s different this time:

“This time around, it’s very clear that we’re in a different paradigm. And so I think that we’re probably done with, I don’t know, I’m just throwing this out there, but like 20%, 25% of this recovery. Ask me again at 12 months, maybe I’ll reassess. I think we have two stimulus programs coming through using reconciliation, which is novel. I think they’re going to be huge. I think there’s going to be no revenue offsets. This fantasy that there’ll be corporate tax increases likely will not happen. So we’re just going to have unadulterated high-powered spending that makes this meaningfully different from the previous expansion.”

When does it end?

“I think eventually, we do run out of fiscal policy at some point. And I think that sort of my mental framework for this would be the short and quick recessions that happened after the Korean War or World War II, where you had a fiscal-cliff recession. I mean, right now, speaking on February 18, 2021, I would say 2023 looks like potentially the end line. I think in 2022, we’ll get another $2 trillion stimulus package infrastructure deal. And I think by 2023, after the midterms, it’s unlikely that we’ll be able to keep up with this high watermark we’ve now established in terms of fiscal spending. But you know, that’s a very low conviction view. All I know is that for the next two years, it’s like diamond hands and to the moon.”

“And I think the difference between this cycle and the previous one, if you’re sitting on the sideline being cautious because of valuations, this or that, waiting for a correction -- three months on the sidelines, it’s like nine months in the previous cycle.”

On the possibility of a reopening bounce in inflation and longer-term view on inflation:

“I think 2023, again, could be a moment when central banks realized that they kind of made a mistake. Inflation is not a monetary phenomenon. It’s not even a mathematical phenomenon. It’s in many ways a psychological phenomenon. And I’m just not sure how economic agents -- you know, households and CEOs -- are going to react to this coming quote-unquote transitory bout of inflation. This is just basically my educated guess, but I think they’ll react by forwarding their purchases to the present from the future. Now to your question of, does that then bring the end of the cycle? I think, yes. I think you can add that to sort of the soup with the fiscal thrust argument, but I am not sure how fast it will happen.”

“And here’s where I would kind of add a political lens to this. They told us what they want to do. Central bankers have told us they want higher inflation. It is the easiest way. And I know most investors don’t like to hear this because they’re savers, but it’s the easiest way to kind of redistribute wealth because a lot of people are indebted at very high levels. Of course, provided their wages rise as well, which I think they will. So I think that this is something that’s coming by policy makers. I think they’ll delay the kind of acts of central banking that comes and cuts inflation in its tracks. I know that we know how to do it. I know that Paul Volcker did, but Paul Volcker was a man of the moment and he managed to fight and swat away inflation through two recessions that increased unemployment. I just don’t see any willingness to impose pain on the median voter at this point. And so I think that we will look through inflation longer than most investors probably think.”

Click this link to listen to the entire podcast.