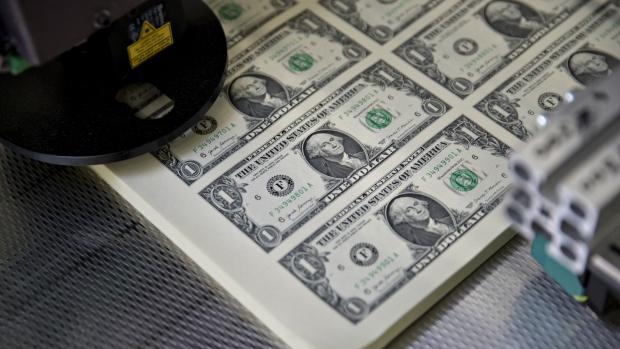 Stacks of 2017 50 subject uncut sheets of US$1 dollar notes bearing the name of U.S. Treasury Secretary Steven Mnuchin sit in a machine at the U.S. Bureau of Engraving and Printing in Washington, D.C., Nov. 15, 2017. Bloomberg/Andrew Harrer

In the court of investor opinion, the verdict is in. The Federal Reserve is guilty of quantitative easing.

Never mind that Chairman Jerome Powell tells everyone his efforts to shore up funding markets are “in no sense” QE. Try as policy-makers may, they’ve lost the ability to convince people that Treasury purchases aren’t at least partially why the Dow Jones Industrial Average is up almost 4,000 points since late August.

Sure, it’s all labels. If you want to call it QE, you can. Or not. If you want to ascribe the rally to Powell, that’s up to you. Certainly the Fed thinks it’s on solid ground. Rather than trying to drive down long-term interest rates to stimulate the economy, a la QE, it’s simply buying T-bills to keep the financial system’s plumbing in order.

The problem for policy-makers is that perceptions matter in shaping sentiment. If everyone believes central bank largess is pushing up prices, what happens in the market when it’s turned off?

“Whether the Fed’s liquidity injection impacted directly the economy or the pricing of assets or not, it’s certainly true that a lot of people think it did,” said Jim Paulsen, Leuthold Group Inc.’s chief investment strategist. “Whether anything is going to change if the Fed takes it away doesn’t matter. If enough people feel it will, then it’s going to impact markets.” 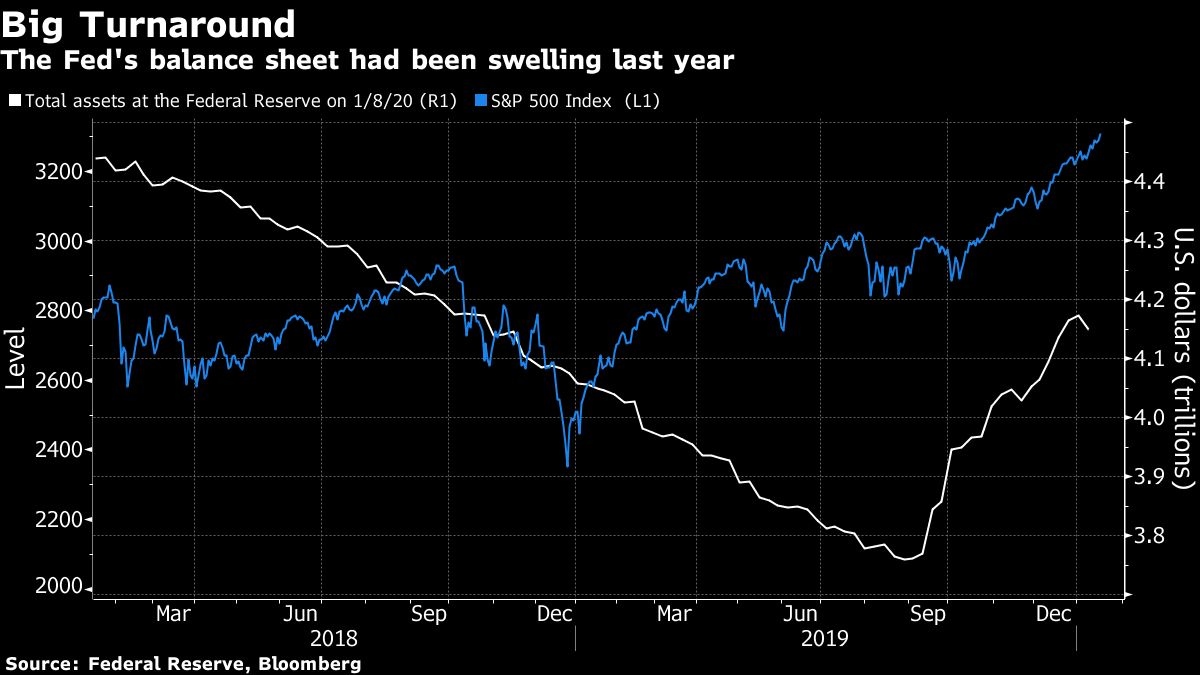 In October, the Fed began buying US$60 billion of Treasury bills per month, a move policymakers deemed as a “purely technical” way to improve control over the benchmark interest rate they use to guide monetary policy. Monthly purchases of Treasury bills will extend at least into the second quarter of 2020, officials reiterated last month.

“Growth of our balance sheet for reserve management purposes should in no way be confused with the large-scale asset purchase programs that we deployed after the financial crisis,” Powell said when the program started.

Except, the market’s straight-up trajectory is muddying efforts to distinguish the new program from the old one. The S&P 500 has soared 16 per cent since its low in August, including the best fourth-quarter rally in six years. Inconveniently for Powell, even his lieutenants say the reaction in stocks isn’t coincidental.

Low interest rates, a belief there is a high bar to future increases and expansion of its balance sheet are helping to lift asset prices, according to Dallas Fed President Robert Kaplan. “All three of those actions are contributing to elevated risk-asset valuations,” he said Wednesday on Bloomberg Television. “We ought to be sensitive to that.”

The ranks of market pundits who agree seems to expand every day. Since the Fed started buying T-bills, the S&P 500 has gone up by almost one per cent for every one per cent increase in the Fed’s balance sheet, Deutsche Bank observed.

“So in that sense, Fed balance sheet expansion has at least been correlated with the increase in the stock market we have seen since October,” Torsten Slok, chief economist at Deutsche Bank AG, said in a Bloomberg Radio interview earlier this month.

QE refers to the crisis-era policy to boost money supply and lower long-term borrowing costs. It helped pull the economy back from the brink of ruin after the financial crisis. Three rounds of easing programs helped the stock market too, coinciding with a fivefold rally in equities.

Data compiled by Bloomberg Intelligence show prior balance-sheet expansions were correlated with stock market gains, too. Through the latest cycle, the S&P 500 notched an annualized gain when the balance sheet was getting bigger that was 5.4 percentage points more than when the central bank was not buying Treasuries, data compiled by Gina Martin Adams, Chief Equity Strategist at Bloomberg Intelligence, show. Every time the central bank has mentioned trimming its holdings, a major equity correction followed, she said.

In 2011, hints from the Fed that it wouldn’t expand its asset purchase program preceded a 19-per-cent drop in the S&P 500. In 2015, talk of balance-sheet shrinkage came before a 12-per-cent decline. In late 2018, a comment about a balance sheet unwind on “autopilot” coincided with the near death of the bull market.

Skeptics say equating quantitative easing with the current program, where the Fed buys short-term debt, is extreme, as is believing that US$60 billion worth of monthly Treasury bill purchases (and sundry other stimulus) holds sway over the direction of a US$30-trillion U.S. stock market. Nevertheless, the wind-down of monthly purchases is the biggest risk facing investors face in 2020, strategists at John Hancock Investment Management said in December.

“Powell went out of his way to explain that it wasn’t QE, but it doesn’t really matter,” said Krishna Memani, former vice chairman of investments at Invesco. “The Fed is in a bind. Effectively with policy initiatives they have, they have to increase reserves, and investors are aware of that. They will be in that mode for the foreseeable future.”

--With assistance from Sarah Ponczek.