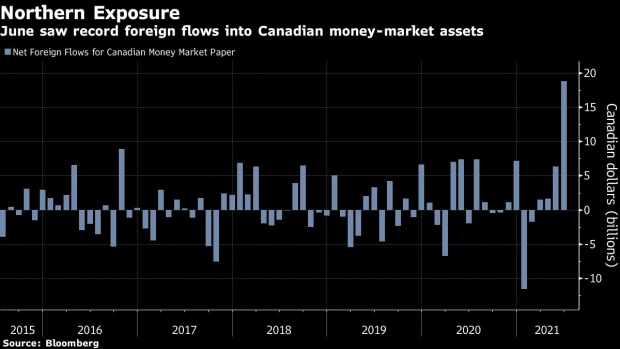 (Bloomberg) -- The overabundance of cash in U.S. money markets that’s been weighing on short-term dollar borrowing costs appears to be spilling over America’s northern border.

Foreigners plowed around C$18.8 billion ($14.9 billion) into Canadian money-market instruments in June, the biggest single month of inflows on record, according to government data. And that was even before the debt-ceiling related money glut reached full force.

With the reinstatement of the U.S. debt limit fueling imbalances in the market for Treasury bills, investors have been scrambling to find somewhere to park their cash.  Much of that has ended up at the Federal Reserve reverse repurchase agreement facility -- now home to more than $1.1 trillion -- but some looks to have found a home in Canada.

The imbalance in T-bills, which has helped to peg money market rates around zero, has been spurred in large part by rules surrounding the U.S. debt cap, which came back into force at the beginning of this month. The Treasury had to slash its cash balance to conform with legislation, resulting in cuts to bill issuance even before the limit returned, and attempts to keep within official borrowing boundaries now that the cap is back in force are likely to keep on distorting matters until Congress reaches a new deal on the ceiling.

Add to that the Fed’s ongoing $120 billion-per month asset-purchase program and the flow of post-Covid stimulus, and there’s a lot of cash sloshing around.

“There’s a compelling case here for additional flows inward to Canada in the coming months given that the standoff over the U.S. debt ceiling could last until October potentially,” said Bipan Rai, North America head of foreign-exchange strategy at Canadian Imperial Bank of Commerce. “The U.S. banking system is flush with cash after and a shortage of investible assets domestically in the front-end.”

Read More: The Debt-Ceiling Farce Is a Headache Investors Could Do Without

In addition to a general shortage of bill supply, investor concern that the ceiling issue might drive a technical default on some securities is helping to crimp demand for some particular issues. It’s not yet clear at what point the Treasury might exhaust the so-called extraordinary measures it’s currently using to steer clear of official default, but concern that it could be in late October or early November is starting to impact bills maturing around those dates.

All that -- and the prospect of picking up a bit more yield elsewhere -- simply adds to incentives for investors to look beyond T-bills and toward other markets, including Canada.