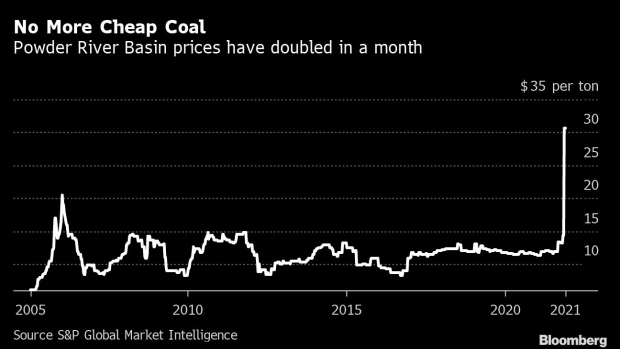 (Bloomberg) -- The cheapest coal in America has never been so expensive, as demand for the dirtiest fossil fuel surges ahead of winter.

Coal from the Powder River Basin in Wyoming and Montana more than doubled in the past month to $30.70 a ton, according to data from S&P Global Market Intelligence released Monday. That’s the highest in spot-market records going back to 2005. Pricier coal from Central Appalacia has also surged to a 12-year high.

“The tons aren’t where they need to be,” Cosgrove said. “There’s just no availability, relative to the shift in demand.”

The Powder River Basin produced more than 40% of U.S. coal last year. Its vast open-pit mines are cheap to operate, though the fuel quality is typically lower than in other regions. That’s why prices are significantly cheaper than in the Appalachian region, where coal has a higher heat content and mines have easier access to export markets.

The spot market accounts for a small portion of total Powder River Basin shipments, with output from most mines sold under long-term contracts that aren’t always made public. Arch Resources Inc., the second-biggest U.S. miner, said last month that its entire output from the basin for next year is already sold, at an average price of $16 a ton, about 20% higher than it was getting for power-plant coal in the third quarter.